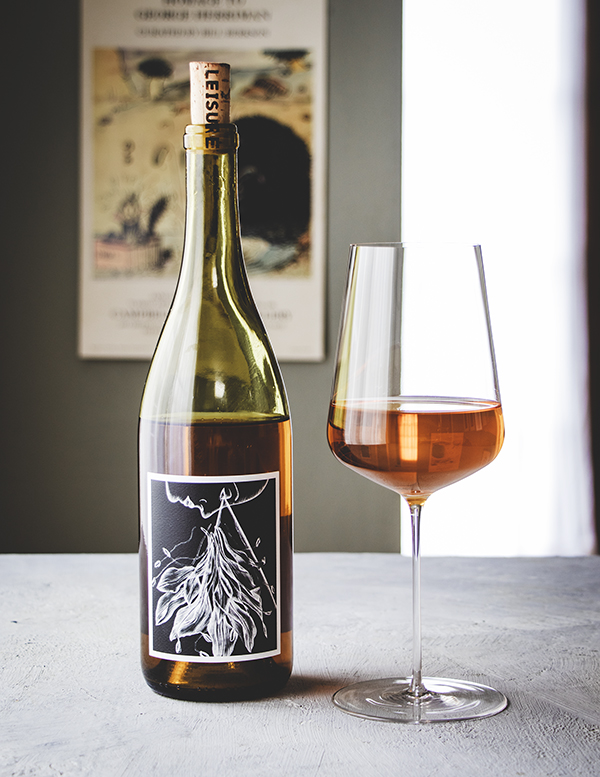 Beguiling. Delicately crisp. Absolutely bone dry. Definitely not what we were expecting, considering that vibrant orange on fire in the glass! It gets better, with scents of apricot and orange peel, layered on top of slightly chalky tannins and the tiniest touch of oxidation. This marsanne and roussanne blend from Caleb Leisure was conjured from his qvevri (large lemon-shaped terracotta pots) buried in the earth at the Coturri winery in Glen Ellen. Qvevri are the traditional wine-aging vessel used in the region of Imereti in the country of Georgia. Leisure produces all of his wines using the qvevri, which function as both fermentation and aging vessels and notes that:

“The shape of the vessel (canonical at the bottom) necessitates its burial and greatly influences how the wine interacts with the must. The clay itself is “neutral” but it does add a textural element and it can soften a wine more dramatically than a barrel. What is most appealing about working with qvevri is the fundamental simplicity (and tradition) of the vessels and the complexity of what they can do. Beyond the practical winemaking advantages, there is also a beautiful logic, a cyclical completeness, to bringing the grapes–which came from the vine, which came from the soil–back into the earth in the form of clay, and in the literal burying of the vessel. The Georgians say that leaving the wine with the skins is leaving the wine with the mother (thus “Mother Knows”). And I love that idea – the wine is raised and protected and matured under this guidance.”

Leisure only works with vineyards that farm organically or biodynamically (with no Roundup sprayed either). Mother Knows comes from a 20-year old organic vineyard in the El Dorado ava (Sierra Foothills) where Rhone varieties like roussane and marssanne thrive. The vines are established in volcanic loam and granite at high elevation so he can pick ripe fruit at lower sugar levels than say Napa or Sonoma. Leisure says “it’s the terroir that gives me the ability to make macerated wines that are still quaffable.”

Quaffable usually not being a term you’d use to describe an orange wine, yet as we noted above, you could no doubt stick a straw in this bottle and suck it down.

Leisure first started as the assistant winemaker at Coturri Winery and eventually was given his own space, in a portion of the cellar that carved out of the hillside. The earthen floor was perfect for burying the qvevri. The 2019 Mother was fermented in qvevri with 100% of skins and stems, with 7 months on skins and stems. 12% ABV.

Tony Coturri, by the way, has been making natural wines for decades before anyone even thought to categorize wines as such.

We purchased this wine at Other Avenues.