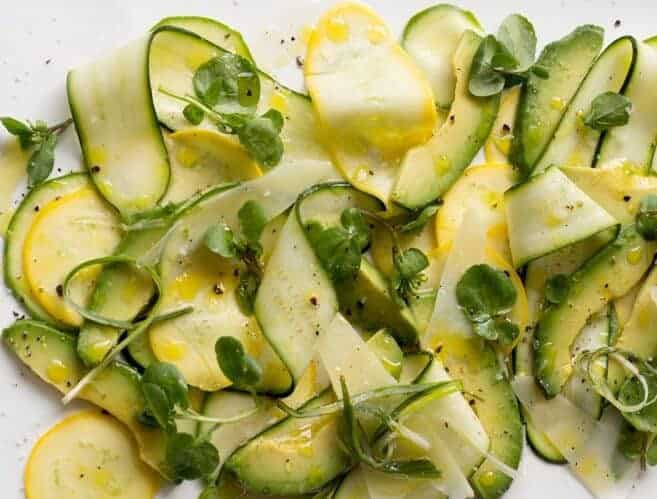 Zucchini are typically neglected on lists of superfoods because of a general misconception that plants must have brightly colored flesh to be rich in antioxidants. Yet despite their creamy interior color zucchini are one of the best sources of carotenoids and other vitamins, making them a nutritional powerhouse.

What is it? Also known by their French name courgettes, zucchini are among the most versatile of summer vegetables. First discovered in the Americas, these popular squash quickly made it back to the Old World where they were embraced, particularly by the Italians. Typically dark green on the outside, zucchini can also be found in bright yellow and pale green. They are related to other summer squash varieties, as well as cucumber and melon. Zucchini can grow very large, but are more delicate and tender at younger ages and most people prefer to eat them when they are smaller. In addition to the fruit, the bright yellow zucchini blossoms are also considered a culinary delicacy and are often served stuffed and deep-fried. In the Mexican culture, zucchini flowers are added to soups and used as filling for quesadillas.

Health benefits Zucchini are an excellent source of lutein, a carotenoid antioxidant that protects the eye against light damage and age-related macular degeneration, the most common cause of blindness. As a powerful antioxidant, lutein has also been associated with reduced oxidation of LDL cholesterol and atherosclerosis in guinea pigs, suggesting it might have a protective role in heart disease. However, this research has yet to be replicated in humans. High blood levels of carotenoids, including lutein, are associated with decreased risk of a number of different cancers including cervical, kidney and colorectal. Lutein in particular is associated with reduced colorectal cancer and may be protective. Zucchini is also an excellent source of manganese, potassium, vitamin C, vitamin B6 and riboflavin. Interestingly, many of the beneficial antioxidants found in zucchini are more readily absorbed in the body when the vegetable has been cooked.

Sourcing and storage Typical dark green zucchini are ubiquitous and can be found in almost every supermarket year round, but peak season is during the late spring and summer. At the Saturday Ferry Plaza Farmers’ Market, an heirloom varietal of the Italian zucchini known as Costata Romana are available from Lucero Organic Farm. Costata have a rich, earthy flavor and meaty texture. They’re a lighter green color with dark specks, and have raised ridges that give them a star-like silhouette. Really fresh zucchini will have a slightly fuzzy texture. Choose brightly colored squash with smooth skin free of lacerations. Wrinkled skin indicates the zucchini are old and have become dehydrated. When cut fresh, zucchini should be moist, crisp and sweet. As mentioned above, smaller zucchini have better texture and flavor, as well as smaller seeds. Avoid zucchini over six inches long, if possible. Unwashed zucchini stores best in plastic that prevents dehydration. Place zucchini in Tupperware or a plastic bag and store in your refrigerator crisper.

At home Zucchini is a nutritious, low-calorie addition to almost any dish. Italians love it breaded and fried; the French slow-cook it with tomatoes and eggplant in ratatouille; bigger zucchini can be stuffed with minced meat, rice and herbs. Zucchini bread is a popular dessert or breakfast cake. Raw zucchini is surprisingly sweet and palatable, and can be sliced or grated and added to salad like cucumber. It is also a wonderful addition to raw vegetable platters, dipped in hummus or other dressing. For low-carb dieters or the gluten intolerant, zucchini makes a divine substitute for fettucini. Using a vegetable peeler, slice off ribbons along the length of the squash. Be sure to place the edge of the squash firmly against a cutting board so it does not break from the pressure. Turn the zucchini with each peel to make even ribbons and stop when you reach the seeded middle. Gently sauté the zucchini ribbons in olive oil for 2-3 minutes or until al dente. Add desired sauce (tomato with basil works beautifully) and serve. Estimate about two zucchini per person for this dish and cook the ribbons in separate batches if necessary to prevent them from getting soggy.

Eating out At Tacolicious, chef Antelmo Faria loves the heirloom costata romano zucchini and other summer squash from Lucero Organic Farm. Faria prefers the costata “because of its texture, which has a nice firm toothy feel.” He also enjoys the savory flavor, describing it as “salty and briny.” Enjoy the costata and other local organic produce on the summer menu at Tacolicious. Nopa chef Laurence Jossel likes the costata for their versatility, they contrast beautifully with rich meats and provide a juicy element to their flatbread starter. In a salad they add a sweet, crunchy texture that works as well at breakfast as it does at dinner. Jossel also loves the color that zucchini and other summer squash bring to a dish. From bright yellow to light green with dark speckles, every zucchini reminds us that summer begins in the garden