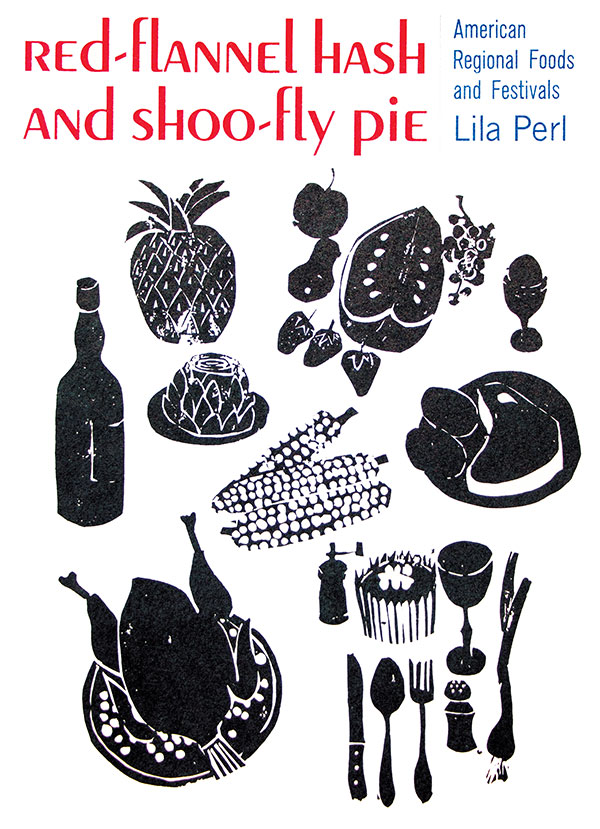 One of the least known and most under-sung food historians of the 20th century is a woman named Lila Perl. The daughter of Russian immigrants fleeing anti-Semitism, Perl was born in 1921 and grew up in Depression-era Brooklyn. She authored more than 60 works. Best known for her literature and scholastic history for children and young adults, she covered the gamut of topics for adult readers as well. Her subjects ranged from Native Americans to ancient Egyptians, as well as such light subjects as the Holocaust, genocide, cloning, and world terrorism. She died at 92 having added a depth and breadth of knowledge to the world that remains to be fully appreciated.

Perl dedicated at least eight of her works to food history, including three on regional foods and festivals (in the Mediterranean, the Danube Lands, and America), three to America during different historical eras, and one on junk food, fast food, and health food, which won a Boston Globe Award. Most of these were written in the 1960s and ’70s, and her sensitivity to and respect for other cultures is remarkable for the time. So many history books of that era, specially written for a younger audience, were deferential to European heritage and put other cultures on a lower plane. This has been a huge disservice to our understanding of history in all areas. Food in particular needs to be seen through a clear lens, without judgment or degradation, and for credit to be given where it’s due. We have Lila Perl to thank for doing her part.

Red-Flannel Hash and Shoo-Fly Pie: American Regional Foods and Festivals was published in 1963, and illustrated with simple woodblocks reminiscent of folk artists like Bill Traylor. Most copies disappeared into libraries, and every copy I’ve seen, save my own, is ex-library. It’s a shame the book isn’t more widely available, or better yet, reprinted for a modern audience, since it still holds up as an authoritative text. Perl sprinkles in fascinating trivia about American food history. The Gold Rush provides fascinating fodder, such as:

From the Chinese community here, and in other West Coast cities, came not only the chow meins and chop sueys, the wontons, foo yongs, and superb lobster and shrimp dishes, but new and improved cookery styles. Especially valuable is the Chinese method of cooking vegetables quickly (by a sauteeing-plus-steaming process), and serving them still crisp and deliciously fresh-tasting. The age-old necessity in their own country for using as little cooking oil as possible made the Chinese experts at quick cooking. This also explains why most Chinese dishes consist of foods that have been finely cut or thinly sliced before cooking.

Or this gem about the paucity of decent food and drink for miners in Gold Country:

Hangtown was a base of supply for a large section of the mining region. Its site was originally known as Old Dry Higgins but was shortly labeled Hangtown, for it was said that five men had been hanged there on the same day and from the same tree…Legend has it that a miner who had struck it rich on his claim came swaggering into Hangtown one day demanding the best meal he could get. Cost was no object. He was subsequently served a mountainous meal of fried oysters, fried eggs, and bacon. Ordering a Hangtown fry thereafter became a mark of prosperity for the gold-rich miners, the status symbol of its day.

Perl entertains her readers with anecdotes about the South, the Southwest, New England, the Midwest, the Middle Atlantic, and even Alaska and Hawaii, which had only become states a few years earlier. Her attention to stories and details make this history rich, whether she’s writing about the differences between Manhattan and New England clam chowder and the famous ducks of Long Island (descended from a variety of duck imported from Peking, China, in 1872), or the origin of Texas longhorns. One of my favorite surprises is about the name of a Southern favorite: hushpuppies, which Perl avers goes back to the very first Southern fish fry:

As the hounds who had come along on the expedition caught the savory odor of the frying fish, they began to whine with unbearable-sounding pangs of hunger. It thus became customary for their masters to toss them some of the newly fried bits of cornmeal with the soothing words, “Hush, puppy!” Today in the South, hush puppies are traditional with fish, be it catfish in inland Georgia, or fried clams and other seafood in coastal North Carolina.

While Perl touches on slavery and credits Africans for bringing many new foods to the American colonies, she doesn’t go into depth about the relationship between Africans and the agriculture of the South; the same can be said of Native Americans’ role in introducing settlers to their foods. I wonder if today she wouldn’t shy away from those subjects. Knowing her biography, I wouldn’t doubt it. Her contribution to our knowledge of national and international food lore cannot be understated, and yet it has been for more than half a century. I hope this introduction serves to pique readers’ curiosity about her books and leads you to follow your nose to her table.

–Celia Sack is the proprietor of Omnivore Books. omnivorebooks.com