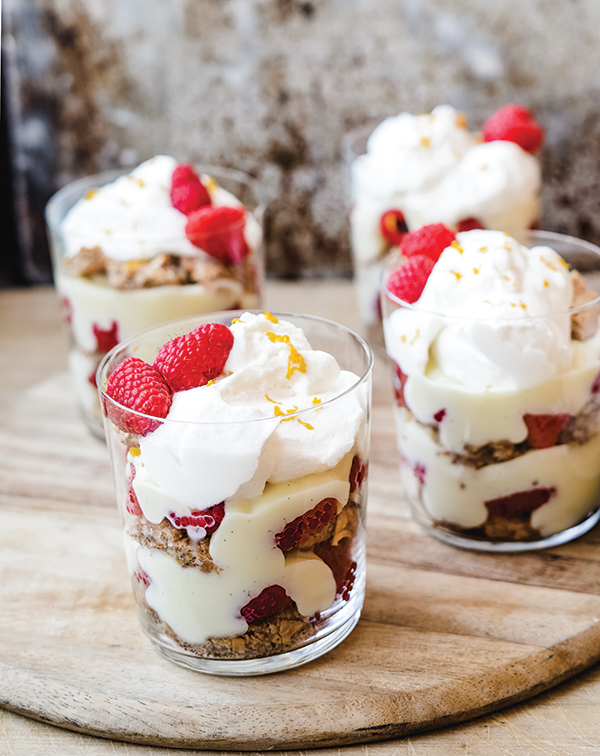 Warm weather during the summertime in Scandinavia can be unpredictable: one day it’s chilly and then the next day can be hot, almost like San Francisco. When the forecast called for sunshine, though, I could always be sure to find my mother in-law, Hanne, out in her summer cottage on the outskirts of Copenhagen. She tended to the flower beds and many raspberry bushes, while her husband always kept the grass well-trimmed.

The raspberry bushes were the first thing my kids would run for immediately when we’d visit, sometimes even forgetting to stop and give Hanne or her husband a proper hug or hello. Hanne didn’t mind the invasion at all; the bushes would produce so much each year that she welcomed anyone who could help with the picking.

Each summer, Hanne would use the berries to make endless jars of jam and often the quintessential Danish dessert, the impossible-to-pronounce rød grød med fløde (red pudding with cream). However, if a special day was to be celebrated, Hanne would always spoil her guests by whipping up another of her favorite desserts: raspberry trifle with elderflower cream and almond macaroons.

Trifles, so I’ve noticed, always seem to be a crowd pleaser, and Hanne’s was no exception. The layering of the ingredients allows for all kinds of contrasts in textures and flavors to occur. What made Hanne’s trifle like no other were her homemade macaroons. Not at all like a French macaroon, Danish macaroons are similar to almond tuiles, and hers are baked in a free-form shape and broken into pieces when layered into the trifle.

Later this week, I’ll be heading back to Copenhagen, but this time the visit won’t be quite the same. Hanne passed away just a few months ago, her summer cottage is now for sale and no one is there to care for the raspberry bushes like she did. She will be missed, but I will carry on making her raspberry trifle in sweet memory of her.

FOR THE PASTRY CREAM:

FOR THE ALMOND MACAROONS

FOR THE WHIPPED CREAM

1. Cut the vanilla bean open lengthwise and scrape out the tiny seeds with the tip of your knife. In small saucepan, combine the vanilla seeds, milk and orange zest.

2. In a medium bowl, whisk together the sugar, cornstarch, salt and egg yolks.

4. Once combined, return the egg mixture back to saucepan and cook until thickened, whisking constantly. Remove from heat, pour into another container and allow to cool slightly.

5. Whisk in cold butter 1 piece at a time. Cover the bowl and chill in the refrigerator until ready to assemble the trifle.

7. With an offset spatula, spread the batter out to an 8-inch square on the parchment paper.

8. Bake until golden and dry, about 30 minutes. Remove from oven and cool completely.

9. When ready to assemble the trifle, whip the cream in a small mixing bowl, to soft peaks, then fold in elderflower syrup, sugar and salt.

10. Assemble the trifle in 6 (6-ounce) glasses. Break the macaroons into 1-inch pieces. Put a few on the bottom of each glass and sprinkle aquavit over (optional). Add a few raspberries on top and then a spoonful of pastry cream. Repeat these layers until the cups are 2/3 full. Top each glass with a dollop of whipped cream.

11. Refrigerate trifles for 30–60 minutes to set. Garnish with any remaining berries,  orange zest and serve.

More recipes by Nichole Accettola from the Kantine Kitchen: