Cooking’s Not for Everyone: Now that we’re kicking gluten, let’s kick guilt trips too 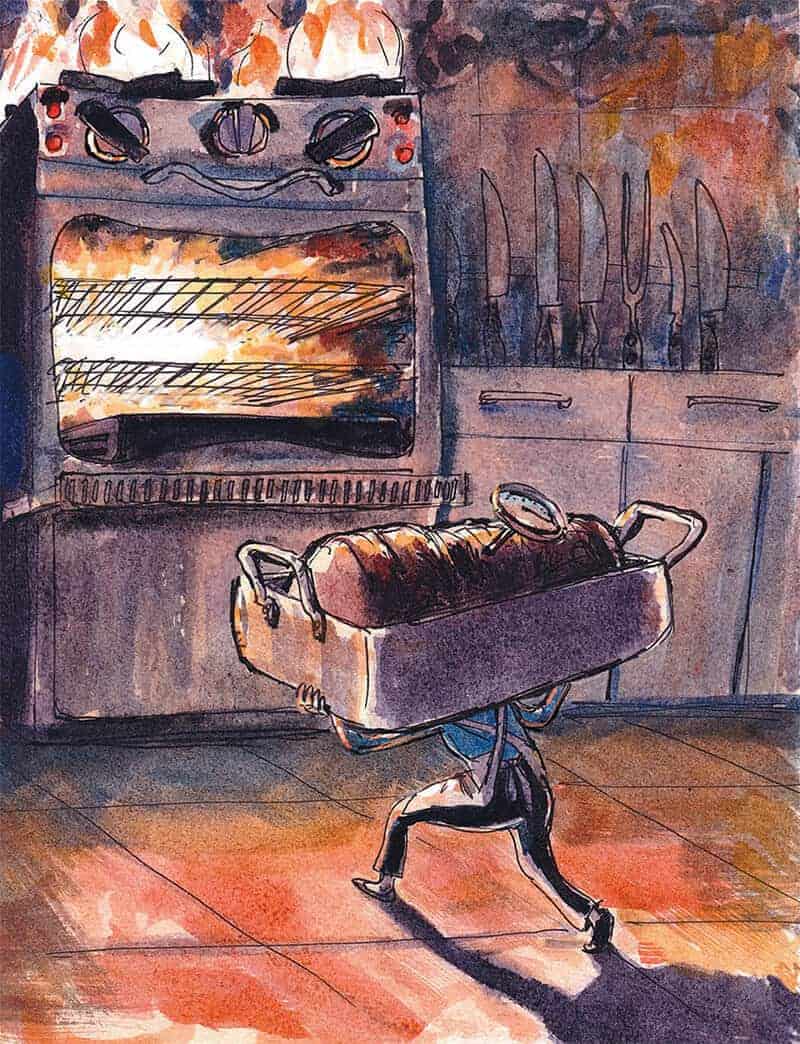 We are bombarded with this truth: Family dinner is a magical and yet endangered institution.

What was once commonplace—lo, quotidian!—for people who lived in the same house is, because of dual-income households and yoga classes and Lego workshops and screens of all sizes and Hot Pockets, going the way of whalebone corsetry.

Sure, it exists, but more as a fetish object than something you pull out and put on everyday.

We must fight for its survival, we are told. Not only is it an insanely effective way to stay connected as a family, but it’s even better at getting the kids into Harvard than mission trips to Guatemala and it can coax elves to dance with unicorns in our backyards.

And here’s the latest promise coming directly from the better-food movement: It will de-industrialize our food system. That last bit only happens, though, if someone in the house cooks this magical meal. And herein lies the problem.

When people who write about food for a living tell everyone else how easy it is to make dinner (and I’m including myself here), a suspicious eyebrow should be raised and the obvious question asked: Isn’t that like an accountant saying that doing your own taxes is easy?

Look, I’m all about family dinner. We all have to eat. My mom cooked family dinner most nights. So do I. I like to cook—it’s part of the reason I write about food instead of, say, the competitive pétanque circuit or the kinship relations of a tribe in Papua New Guinea.

If I’d only ever put dinner on the table while working as a freelance writer, I’d probably still be beating on the “everyone cook” drum kit I used to have. But for awhile there I had a staff job that required a commute. If I left before 7 and drove like my mother, I could make it door-to-door in 27 minutes. When I let up on the lead foot, it took at least 45 minutes, and I quickly saw the problem with family dinner.

It’s a beast. A beast that needs to be fed. Every single night. Whether it’s easy or not.

I could no longer honestly concur, as I once had, with Laurie David’s assessment that “To not be cooking in your own home is to be missing one of the best parts of the day.”

It was a humbling glimpse into the lives of people who don’t like to cook, because the lack of time and the fact that as a food writer and recipe developer I’d already spent most of the day cooking turned me into someone who no longer looked forward to making dinner.

Suddenly I understood in a visceral way the trajectory of humanity—the minute people get any money they tend to pay people to do three things: clean their house, watch their kids and cook their dinner.

As my husband and I checked in to confirm who was picking up the kid and what dinner might be, I came to understand why so many housewives used to have a “pork chops on Tuesday” weekly rotation: at least the menu didn’t need to be reinvented every night.

What had once been a real creative and satisfyingly productive outlet during my day became a dirge. I saw why feminists used to commonly lump cooking in with the rest of housework as mind-numbing, endlessly repetitive labor, the fruits of which were tied primarily to other people’s appreciation of it. “The validity of the cook’s work is to be found only in the mouths of those at her table,” Simone de Beauvoir wrote. “She needs their approbation, demands that they appreciate her dishes and call for second helpings; she is upset if they are not hungry, to the point that one wonders whether the fried potatoes are for her husband or her husband for the fried potatoes.”

So where I once stood out front twirling a baton in a the-world-would-be-a-better-place-if-everyone-cooked parade, I stopped telling people they should at least try cooking. I no longer pontificated about how easy it was to make a homemade dinner on a regular basis. I started to see the call to whisks and the homage paid to homemade bread that have become part-and-parcel of the food movement as what they are for anyone who doesn’t feel like cooking: oppressive bullshit. 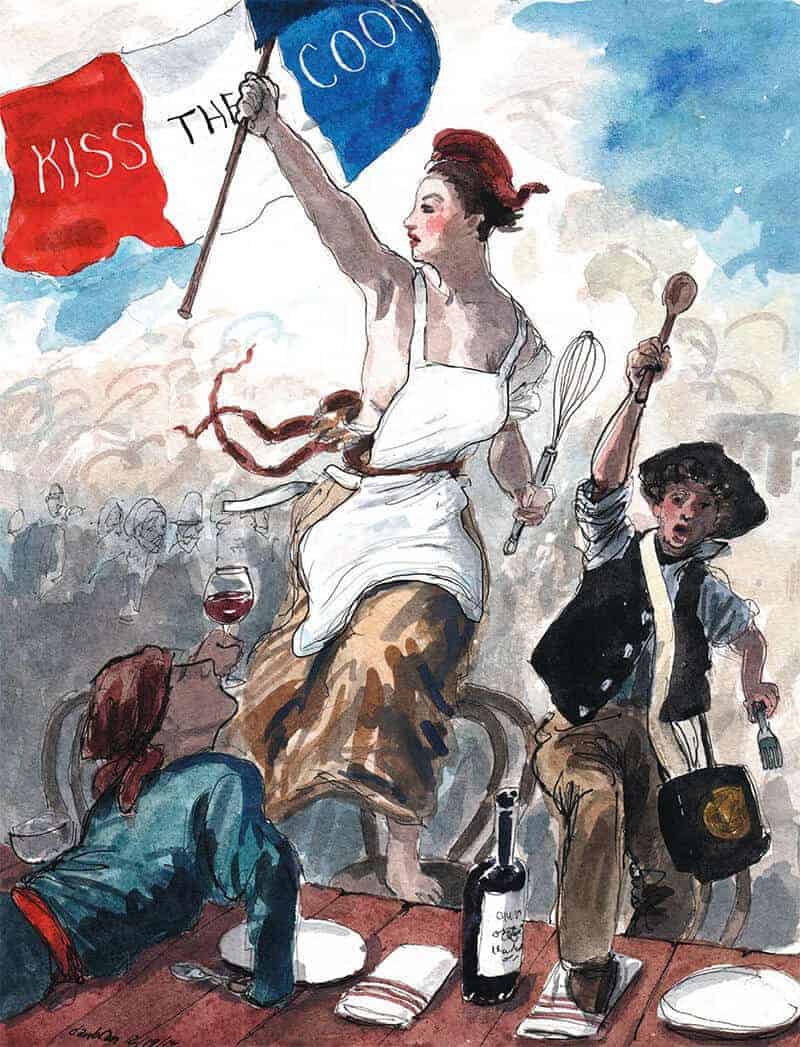 First, it’s worth noting the obvious: Responsibility for getting dinner on the table still falls disproportionately on women’s shoulders. It’s changing, for sure, and I know plenty of men who cook for their families. But at this moment in time, calling for people to cook more for their families, without specifically calling out dudes, is asking women to do it.

Equally important, when you tell grown-ups who have a decent sense of what they like and don’t like that they have to do the latter, they tend to do one of two things: the healthy tune out, the neurotic feel guilty. Neither of those outcomes gets people to engage more deeply with their food, to know where it comes from, to ask how it’s produced.

Don’t get me wrong, I believe everyone should know how to cook, at least some basics, but not because learning to cook is “the most important thing an ordinary person can do to help reform the American food system,” as Michael Pollan claims, but because it’s a basic life skill. Everyone should also know how to sew on a button, use a drill, change a tire and perform CPR. I no more believe there is some larger good in cooking than I think anyone who doesn’t want to should sew their wedding outfit or build their houses or never call AAA or 911.

There is tremendous arrogance, I now see, in the assumption that if people would just give cooking a try, they’d like it enough to become more interested in food instead of getting pissed off that they’re wasting so much time doing something they don’t like. For many people cooking is like gardening for me: something they’re only glad to have done and which they fantasize about paying someone else to take on. Wouldn’t it be awesome, they think, to hire a personal chef?

About the connection between everyone cooking and a more sustainable food system—it’s bunk. I don’t see how it matters whether the locally grown organic kale salad with a lemon dressing was made by someone in my house or not. That fried foods are easier to produce on a large-scale level than fresh tossed salads (and fresh tossed salads easier to produce on a small-scale, home kitchen level) is a hurdle to people who want to feed their families healthful food without cooking, but it’s not a roadblock. That it is a hurdle is something systemic that needs fixing, but everyone cooking their own food isn’t a realistic solution. There would be a whole lot less labor abuses in the garment industry if we all sewed our own clothes, but can anyone imagine suggesting more home sewing as a first step towards changing that system, much less present it as a key component of a long-term workable solution?

Home cooking is good for the food system because it leads to or involves other things. People who cook tend to have healthier diets because of what they are cooking; there’s no magic fairy dust released during the cooking process that makes the food better (and if there is, I’m pretty sure it doesn’t happen when the cook is bitter about stirring the pot).

People who cook are more likely to pay attention to the quality of the ingredients they use, the thinking goes, so there’s a greater chance they’re going to shop at a farmers market or buy organically grown foods or, at the very least, by whole foods ingredients instead of processed foods.

Yet, it’s easy to imagine how the environmental good of more communally produced food might be greater than more home cooking. A more efficient use of resources is certainly possible, both on the raw material side—25% to 30% of food that makes its way into U.S. homes is simply tossed out—and the auxiliary elements like water and power. Baking bread, for example, can be a satisfying activity for those who like it, but there’s a reason bakeries took off. It takes a lot of sustained heat to bake bread, if nothing else. Having one reliably hot oven per community makes some good wood-cutting sense. Then having an oven where people can place their pots to cook up their stew or casseroles, after the bread is baked but the oven is still hot, while they tend to other things, as used to be common practice in plenty of rural villages, seems like a decently sustainable practice to the modern eye.

Along with providing resources for those who want to cook or cook more, those of us who care about the food system should create ways to make family dinner truly easier, more enjoyable, more healthful and more delicious for everyone, even those people who don’t want to cook it. That realism, more than all the chiding in the world, would raise food consciousness and make sure everyone cares as much about the quality of that food and how it’s produced as we do.

There is no moral good or bad in cooking. I am always struck by the language people—or, to be exact, women—use when commenting on the amount of cooking I do. They say that I am “good.” It is often followed by a confession about how they are “bad” because they hardly ever cook. It’s the culinary Madonna-whore dichotomy.

People who are passionate about quality food and a more sustainable food system shouldn’t be out encouraging such nonsense. We shouldn’t be proselytizing cooking and fetishizing the homemade. We need to debunk those ideals and get the focus back on making all food—whether home-cooked, convenience, order-in or just plain fast—good food.

Me, I would like a better food system for the sake of my cooking. But also so that, when no one in the house feels like lighting the stove, we know whatever food we choose to eat will be as healthful and sustainably produced as possible. No one should have to cook to make that happen.