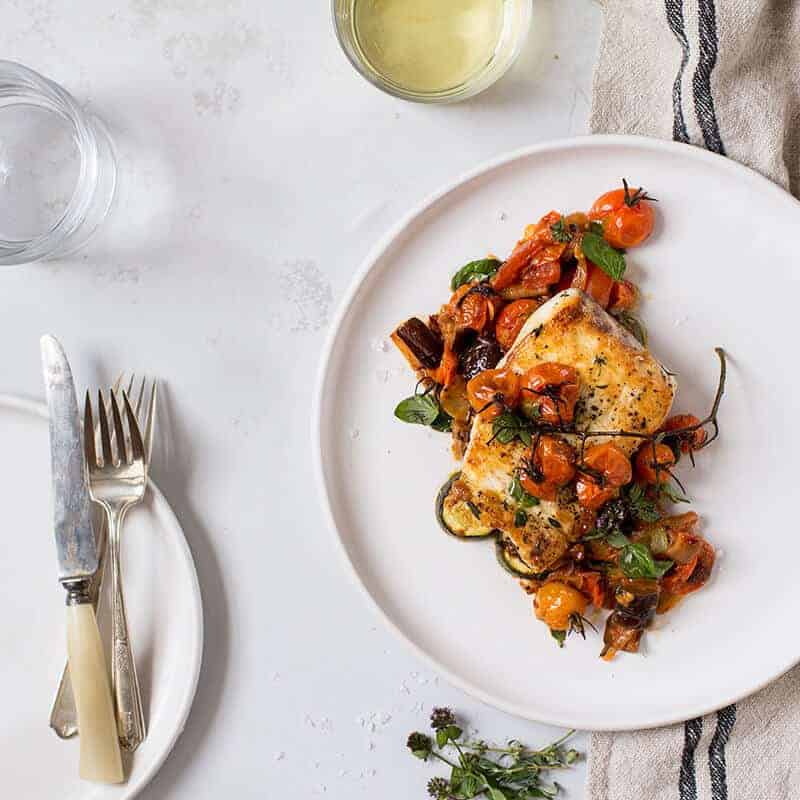 How do you say “pan-seared halibut with ratatouille” in French?

Having never studied a day of French in my life, I have had my share of epicurean misadventures in France. A side of morel mushrooms that materialized as a heaping plate of bone marrow (morille vs. moelle). Dreams of a beautiful roasted chicken dashed by the octopus that arrived in its place (poulet vs. poulpe). Merde!

To alleviate this culinary conundrum, I have come to trust that “le poisson du jour” is a reasonably safe order for those of us who are both willing to go with the chef’s recommendation, and also woefully illiterate in French.

In Provence, maybe more than anywhere else in France, the pleasure of eating simply and thoughtfully is how small restaurants tucked in the hills and Michelin-starred chefs alike approach their food. Nestled just inside the walled hamlet of Saint-Paul-de-Vence, outside of Nice, resides the timeless restaurant La Colombe d’Or. The walls are laden with art from once little-known starving artists—like Picasso, Chagall and Matisse—who would trade art for food. While hindsight would declare a winner in this trade, I am sure the artist’s felt fortunate dining under the stars on the terrace. The fare has changed little over the past century, with grilled fish and local vegetables dominating the handwritten menu.

And while simplicity is a tenet of Provencal cooking, so is knowing just how to combine the simple ingredients into something that is greater than the sum of its parts. Alain Ducasse’s cookpot of vegetables is the ratatouille that dreams are made of. Roasted tomatoes and onions add rich and deep layers of flavor to eggplant and zucchini that only vaguely resemble any dish of stewed ratatouille I have ever tasted.

Using both tomato paste and fresh tomatoes, along with anchoïade, a paste made with anchovies and garlic, or just a few chopped anchovies, adds a depth to the vegetables. And with our California tomato season stretching well into fall, roasted ratatouille is a hearty dish to bridge the season. A great base for most any poisson du jour, local halibut, red snapper or dorado are all great options.

Simplicity is a tenet of Provencal cooking, so is knowing just how to combine the simple ingredients into something that is greater than the sum of its parts. Alain Ducasse’s cookpot of vegetables is the ratatouille that dreams are made of. Roasted tomatoes and onions add rich and deep layers of flavor to eggplant and zucchini that only vaguely resemble any dish of stewed ratatouille I have ever tasted.

In a medium ovenproof skillet,sauté onion in 1 tablespoon olive oil until soft and starting to caramelize, about 15 minutes.

Add the paste or anchovies and cook until melted into the onion.

Meanwhile in a small bowl, combine 3 tablespoons olive oil, the tomato paste, garlic, herbs, chili flakes, salt and pepper. Whisk and taste for seasoning. The mixture should be well seasoned as it will flavor all the vegetables.

In a large mixing bowl, combine the caramelized onions, zucchini, eggplant and tomatoes. Add the sauce to the vegetables and toss until evenly coated.

Transfer the vegetables back to the skillet and cook until the vegetables are hot and just starting to cook. Transfer to oven and roast for 45–60 minutes, stirring the vegetables once halfway through. The vegetables should be browned, and the sauce dark and rich. Stir in a handful of basil and oregano. Season to taste with salt and pepper. Keep warm in the oven.

In a nonstick skillet, heat the remaining 1 tablespoon olive oil. Salt and pepper the fish fillets. Cook on one side until golden in color, 3-5 minutes. Flip and cook for about 3 minutes on the second side, until just cooked through.

Serve fish over top of ratatouille.

Edible San Francisco celebrates what feeds us in the SF Bay Area. We connect people to their food—where it comes from, how it’s produced, and who makes it. Our readers are enthusiastic home cooks, top chefs, farmers and other food producers, butchers and bakers, distillers and vintners—everyone who is leading the way in how we eat and drink today. We combine fresh, seasonal, modern recipes with compelling storytelling, all created by incredibly talented writers, photographers, and illustrators from the Bay Area. Edible San Francisco believes what and how we eat matters to our health, to our lives, and to our communities.