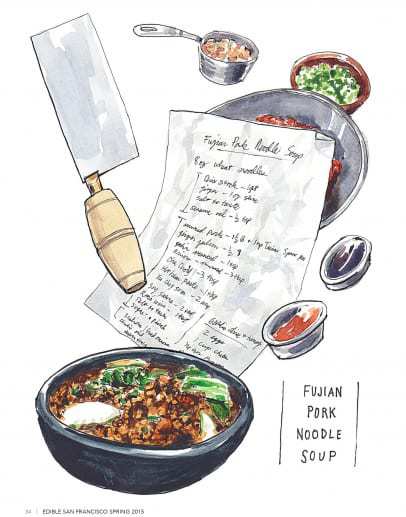 Ong gave me the recipe for pork noodle soup, which he’d scribbled on scratch paper, a printout of a coupon from a sporting goods store (he and his wife have a couple of kids, both boys). Ong was born in Malaysia, though his dad has Fujianese roots, and this soup is the simplest and homiest of things: pork Ong minced with double cleavers as we talked, stir-fried with ginger and garlic, hot bean paste and fermented mustard greens, with stalks of yu choy, the slightly more delicate cousin of Chinese broccoli.

Read John Birdsall’s Crawling Back With Cleaver: Alex Ong’s pork noodle soup reminded me that cooking is a skill of diligence, of the unglamorous work of getting things ready, of honing. My soup was fine, not as good as Ong’s, not even close. My single, sort-of sharp cleaver made the mince tough and a little dry—I was battering the pork fibers, bruising as I chopped. My soup was a failure, not of cooking, but of patience.