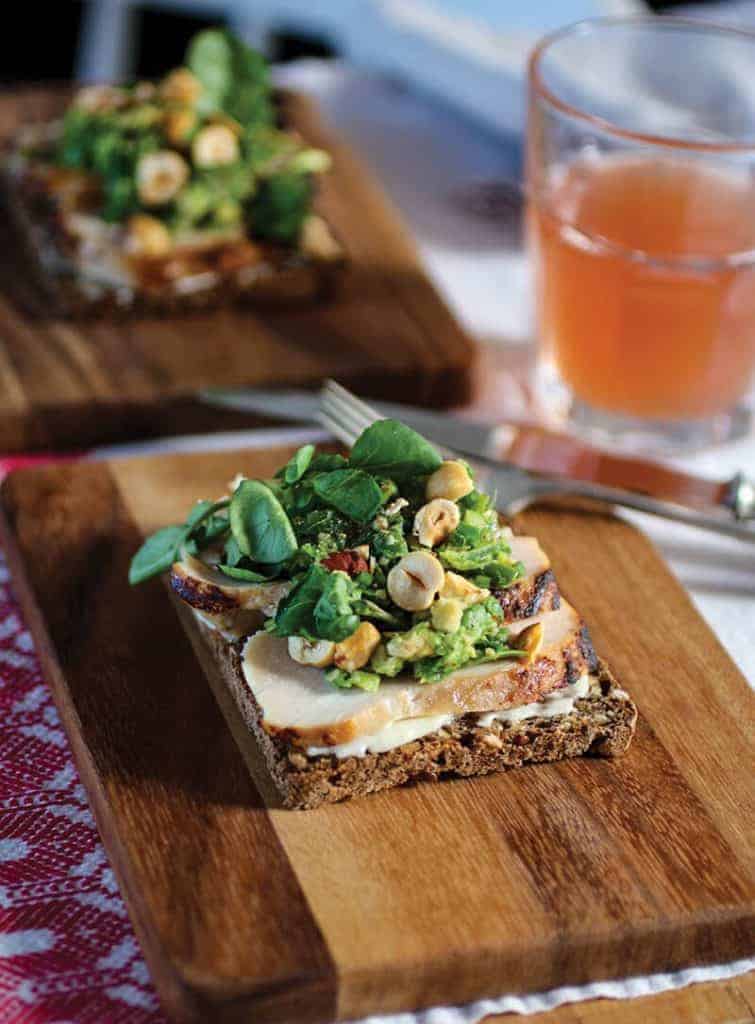 There is a forest just north of Copenhagen called Dyrehaven, or Animal Garden, whose tranquil trails, shady meadows, towering oak trees and herds of nibbling deer seem to be straight out of a H.C. Andersen fairytale.

In the middle of those woods, a quaint Danish restaurant can be found, and it’s there, many years ago, I spent the summer working. It was the first time I’d worked in a kitchen specializing in Danish food and during those warm months I learned to smoke herring, forage wild mushrooms, make fresh cheese and cure meat, all in a Scandinavian manner.

The restaurant kitchen was worn and tiny, and because I was six months pregnant, the space felt even smaller. Most days I’d volunteer to work the cold station that was in its own little corner, so I could avoid getting in a belly-jam while trying to pass the other cooks on the narrow hot line.

Manning the cold station was, however, no walk in the park, pregnant or not. It was the busiest station during lunchtime, as the restaurant was known for its Danish open-faced sandwiches, or smørrebrød, most of which came off of the cold station.

To me, the sandwiches, made with slices of dark rye bread, exemplified Danish simplicity. The ingredients, some savory, others sweet, some crunchy, some velvety, layered atop the bread, became a food that was not only beautiful to look at, but utterly delicious.

As the summer progressed, I gained a solid understanding of Danish-style sandwiches, so much so that I began to create new menu items. As a foreigner I could concoct different combinations freely, without giving much consideration to the unwritten rules of classical smørrebrød.

Eventually, the summer season began to wind down, and the time to begin my maternity leave arrived.  On my last day of work, the head chef approached me, asked me to pack up my knives, change my clothes and seat myself in the dining room so he could make a special lunch for me.

My lunch that day was a long wooden board displaying small versions of each and every smørrebrød from our menu – an edible culmination of the food I’d made all summer. The Danish classics like marinated herring and smoked mackerel were there, and proudly, my creations were there too.

A favorite in the bunch was a summery chicken sandwich I’d created with brined chicken breast. (The brining keeps the breast moist and flavorful.) The sandwich is made by spreading a thin layer of mayonnaise on a slice of Danish dark rye bread. Slices of brined, pan-roasted chicken breast are then arranged in a single layer on the bread, and topped with a vibrant green bean and hazelnut puree, cress and chives.

Now I call San Francisco home, and just the other day, I saw blue lake green beans at the market and decided to make this sandwich again. It’s funny how food can evoke such memories. I’ll always think fondly of that summer in the woods, and the lessons I learned there remain with me to this day. 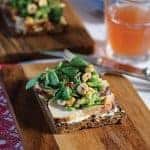 Danish sandwiches, made with slices of dark rye bread and ingredients that are savory, others sweet, some crunchy, some velvety, exemplify Danish simplicity. Chicken Green Bean Smørrebrød (open-face sandwich) is one of our favorites!

FOR THE CHICKEN BRINE

TO MAKE THE SANDWICH

Brine the chicken. Rinse chicken under cold water and pat dry with paper towels. Place in a nonreactive dish.

Combine salt, brown sugar and hot water in a small saucepan and heat until salt and sugar dissolves. Remove from heat and stir in cold water. Allow brine to come to room temperature. Stir in lemon slices and pour over chicken. Cover with plastic wrap and let stand in refrigerator for two hours, turning the chicken once.

Roughly chop beans and transfer to the bowl of food processor. Pulse until finely chopped, adding olive oil to help make the beans move about.

Chop hazelnuts roughly and add half to the beans, setting the other half aside for garnish. Pulse processor for a few more seconds, season with salt and pepper.

Cook the chicken. Remove the chicken breasts from the brine, and pat dry with paper towels. Season lightly with salt and pepper. Heat neutral oil in medium sized skillet over medium heat. Place breasts in pan. Season lightly with salt and pepper. Pan roast breasts over medium low heat until cooked through, turning once, about 8 minutes. Remove to plate and allow to cool slightly

Build the sandwich: Lay the bread slices out on a cutting board. Spread mayonnaise on each slice, being sure to cover all edges and corners.

Separately, slice chicken breasts into ½” slices on the bias. Cover each bread slice with a single layer of chicken, overlapping just slightly.

Top with a spoonful of green bean puree, garnish with sprigs of cress, chives, remaining hazelnuts and a sprinkle of salt and pepper.

Transfer sandwiches onto individual plates or boards and serve immediately.