A Matter of Taste: CUESA and the Long View 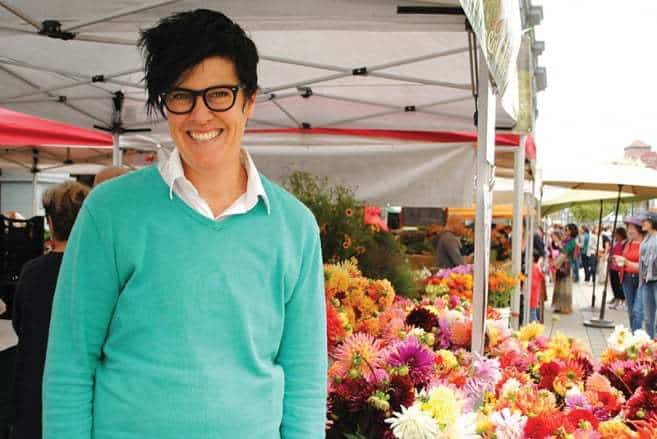 Calling all Edible readers: If you love food and food systems, there’s reason to celebrate. The Center for Urban Education about Sustainable Agriculture (CUESA) turns 25 this year and it’s a time for reflection and big plans as the group blows out the locally sourced beeswax candles on its birthday cake.

I spoke with Marcy Coburn, executive director of CUESA, the day after CUESA’S anniversary celebration. It was a passionate, thoughtful conversation that made me stop and consider just what lies behind the acronym and how my foodie community can get more in swing with the reciprocal potential of an entity like CUESA, both monetarily and politically.

CUESA, a nonprofit educational organization since 1993, runs the Ferry Plaza Farmers Market (on Tuesdays, Thursdays and Saturdays), the Jack London Square Farmers Market in Oakland (Sundays) and the Mission Community Market (Thursday evenings). CUESA only recently started running the Oakland and Mission markets, and those changes reflect CUESA’s mission of diversity, equity, inclusiveness and justice. That’s a tall order. Who better than CUESA to fuel the long haul of activism with organic food grown by local farmers?

Says Coburn, “We’re in a period of deeply listening.
We’re taking in the voices that may have been absent from the table and we’re really listening to how we can be more relevant and more accessible to all demographics. We’re listening internally and externally so we don’t make these changes in a vacuum, so these changes aren’t just lip service.”

CUESA has a history of putting its money and food where its mouth is, and I can hear the authenticity in Coburn’s voice. It’s no wonder CUESA’s farmers markets have been some of the first to ban plastic bags, to accept CalFresh EBT benefits and to implement the Waste Wise Initiative. The WWI diverts more than 90% of farmers market trash from the landfill.

In addition to and in synergy with running the markets, CUESA funds and hosts education programs and farmer support initiatives. Through Foodwise Kids, CUESA Kitchen and the Food Shed Program, CUESA provides educational activities and programs that teach more than 3,000 children annually about sustainable farming and how to cook the food the farmers are selling.

“I’ve heard that the farmers market can be intimidating and I think one of our main goals is to make buying your groceries here the norm, not the exception,” Coburn says. I ask her if all these programs are helping to get the word out on a wholesale instead of boutique level. “I think they are. If you look at Schoolyard to Market, which provides high schoolers with the opportunity to sell what they grow at their school gardens, we’re cultivating entrepreneurship. It’s got to go beyond the elite, boutique level. Programs like this are meant to teach business skills, which high schoolers want. The forum is compelling because it’s a direct-to-buyer model, which is one of the most straightforward types of capitalism and a good place to start if one wants to create future farmers and buyers.”

It’s generally well known that farmers are aging out throughout the United States; their average age is 58. According to the U.S. Census of Agriculture in 2012, the average age is rising and the number of farmers is falling, while the diversity of farmers is rising. One encouraging statistic is that more than 25% of farms in the Bay Area are run by women. CUESA hosted a talk on June 25 with farmers and policy makers titled “The Future of Food: Women Farmers at the Forefront. ”

I ask Coburn if she thinks the #metoo movement has shaped any part of CUESA’s vision. “Yes, absolutely. Women’s voices are being heard. Women of color, LGBTQ, different economic profiles—if CUESA wants to create this sea change in culture, we have to include all people and make the food movement part of these movements and vice versa. It’s an incredibly vibrant and exciting time to be here. Shopping at the farmers market is a radical act.”

I’m all for eating good food and being punk rock at the same time.

The Feedback of the Future

Coburn has been with CUESA for four years and has a deep history with the food systems of the Bay Area: she is the fourth generation of a family of fruit and nut growers. With such an iconic host as the Ferry Building, one might imagine that the farmers market is an institution that can be taken for granted, but the numbers don’t lie: only 4% to 6% of San Franciscans shop at the Ferry Plaza Farmers Market. I’m surprised by this number at first, only to remember that there are many, many other markets available and each has its own cultural brand or ethnic identity, not to mention the average Whole Foods, Safeway, Trader Joe’s or corner store throughout the city. Chinatown’s markets and the Persian markets are vastly different from each other and from CUESA’s markets, and conventional grocery stores provide a totally different service. Invariably, the question comes up of whether policy or culture comes first.

“We want to be the most accessible and beautiful,” Coburn sighs as she describes how she imagines both gaining more customers and creating cultural and policy change. “I would really like to know what your readers think could help make CUESA’s markets and programs truly successful. What innovations should we take on?” In response, I break journalistic protocol by talking for a good couple of minutes, suggesting all manner of ideas. It occurs to me that it feels great to be asked how to improve my local farmers market.

“Really, have your readers email me,” she says at the end of our conversation. “We want to listen more.”

CUESA recently signed another
10-year lease with the Ferry Building and that means we’ve got lots of time to get out, buy some crazy-looking heirloom vegetables, listen to some good music, dance with our kids, grab an ice cream, support low-income families, meet a local farmer, learn about food systems, pet a goat, sample some apricots, hone some kitchen
skills, reduce pollution, encourage a budding entrepreneur and change the world.

Phew, that was a lot. I’m hungry. Which market is open now?