The Hidden (Recent) History of the Mojito 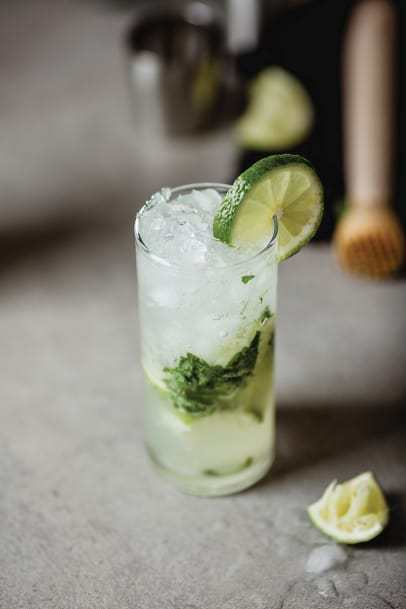 During those summer days when the sun burns bright, the opportunity to sip a cool, refreshing drink is reason enough to sit on a patio. There are a few cocktails that are iconic enough to instantly order, especially when you’re too sun-kissed to consult the menu. One of those drinks is the Mojito.

The Mojito is served tall, over ice, and is garnished with a verdant, aromatic sprig of mint. Classically, it’s a mixture of white rum, lime, raw sugar, and soda water. While you are likely to be familiar with this drink, perhaps having imbibed one or two, maybe on a hot day, you might not be aware of how important it became in the early days of the Bay Area’s cocktail revival.

In the 1990s, scotch and vodka reigned supreme. Bartenders didn’t precisely measure their drinks or use the array of tools that now no bartop is complete without. Things were uncomplicated, but a lot less interesting. This all changed when Paul Harrington, a young recent UC Berkeley graduate, found his way to the Ashby flea market.

Harrington had been working at the Townhouse Bar & Grill in Emeryville when he stumbled upon a used copy of Memories of a Cuban Kitchen by Mary Urrutia Randelman and Joan Schwartz while browsing the myriad of vintage items at the flea market. Charles Schumann, a famed British bartender, wrote the cocktail section of the book. “It had a lot of really great recipes and stories about the Mojito. That book really inspired me,” Harrington says.

At that point, Harrington was known for making his bar guests bespoke cocktails, many of which he learned from reading vintage cocktail books. He would excitedly serve a Mojito when the mood called for it. He made Mojitos for guests who had traveled from the East Bay to Enrico’s Sidewalk Cafe, where he started working in 1992. Enrico’s, located in North Beach, had originally been owned by Enrico Banducci. It was a popular staple of the neighborhood with its outdoor seating, but it closed in 1998. New owners took over the space, and when it reopened in ’92, they asked Harrington to run the bar.

One day, two writers walked into Enrico’s (one of whom was Gary Wolf, who is a writer at Wired). They were on assignment for a piece about summertime drinks. They sat in front of Harrington and asked him to make them a good warm-weather cocktail. “At that point,” Harrington says, “we didn’t have a cocktail menu. I made them a Mojito and started the Mojito stories I knew. They were scribbling, scribbling, scribbling. It was an easy assignment because I had so much information and it was fresh and I was excited about sharing it.”

After the story ran, all people wanted were Mojitos, the rum drink they had read about. In fact, they brought in the magazine and ordered directly off of it. Harrington, who enjoyed the creative freedom to make his guests a bartender’s choice based on his exchange with them, was uncomfortable with this new style of ordering. “It was really the first time people asked for something I hadn’t told them about. It was unsettling. It wasn’t the same experience,” he says.

Harrington stayed at Enrico’s for six more months before returning to the Townhouse (and left the industry entirely to become an architect a few years after that, moving back to his native Washington state), but not before turning San Francisco bar goers on to Mojitos. The drink stayed popular after he left. The other bartenders at Enrico’s knew how to make it, and it became a staple of its own in North Beach.

The demand for Mojitos continued steadily in its classic form until David Nepove took over Enrico’s bar program in 2000. Nepove, who had begun working there in 1996, embraced the craze. “We were selling hundreds of Mojitos,” Nepove says. “We went through so much mint it was ridiculous.” One day, a coworker brought in a kumquat. He was curious about how this might taste as a variation of the cocktail, so he muddled it into a drink. And it worked. This concoction evolved into the Kumquat Caipiroska, in which he traded the lime for the kumquat and the rum for vodka.

Nepove realized that other types of fruit had the same potential. “I became the guy who loved using fresh fruit and muddling everything up. I started bringing in flats of strawberries, raspberries, and kiwis. People loved it because they got to watch all this fresh fruit be incorporated into the cocktails,” he says. These seasonal variations became so popular that he put a Mojito section on the menu.

Making a Mojito is a bit more labor intensive than some other drinks because it involves several steps, including muddling and adding ingredients at different stages. Most bartenders have one or two drinks they don’t enjoy making, and for many, it’s the Mojito, especially at high-volume bars where getting cocktails to guests quickly is crucial. But not for Nepove. He never said no to muddling. Up until he worked at Enrico’s, he preferred Manhattans to Mojitos. “I drank Manhattans. My first email address was Mr. Manhattan,” he says. But because he was always happy to muddle a drink for people, he earned a reputation for this around town. “I remember walking down the street and somebody saying, ‘You work at Enrico’s right? You make Mojitos, right?’ I’m like, ‘Yeah, that’s me. I’m Mr. Mojito.’ It’s almost like it just popped out of my mouth as a joke. I retired Mr. Manhattan then and became Mr. Mojito.”

Nepove went on to enter bartending competitions, particularly in the early 2000s, often winning with his Mojito variations. He designed his own line of muddlers, which he sells as Mr. Mojito, with Marcovaldo Dionysos, a fellow bartender who had trained Nepove at Enrico’s. “David realized that the muddlers he was using eventually looked like all the paint had flaked off,” says Dionysos. Together, they created a wooden muddler that was unpainted and long enough to fit into a pint glass without causing a hand cramp. “They were pretty simple at first. And then at one point, David was getting orders for 40,000 muddlers at a time from Moët Hennessy,” Dionysos recalls.

Enrico’s closed in 2006 after lease negotiations for the space failed. However, the legacy of the Mojito had been established, turning people on to bright, refreshing cocktails with seasonal fruit. It inspired many bartenders who followed Harrington and Nepove to experiment with new ingredients, helping San Francisco carve its identity as the nation fell in love with cocktails all over again.

So now, when you’re out in the sun enjoying a cocktail, take a minute to think about your drink. Where did the ingredients come from? What is its hidden history? It may lead back to Harrington or Dionysos, or perhaps someone else whose story you have yet to discover.