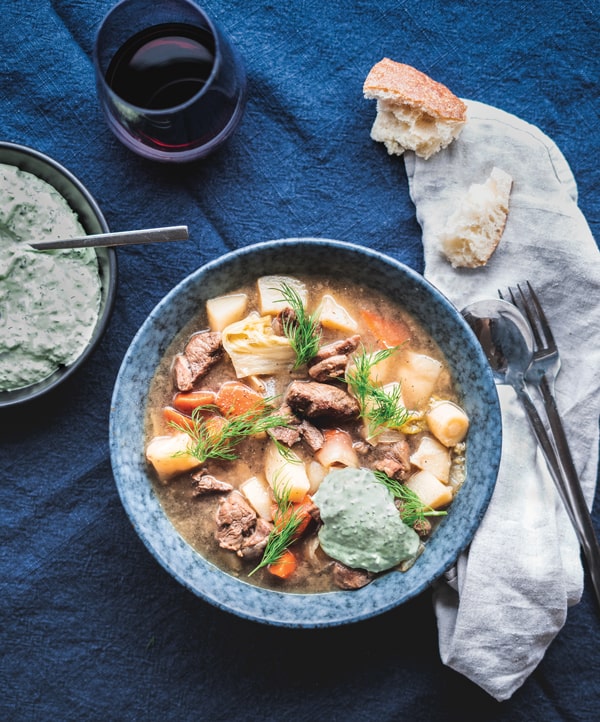 A good number of guests who come to my restaurant, Kantine, have a desire to revisit the cuisine they’ve eaten while traveling in Scandinavia. Most of them have been to the region during the summertime and have been swept away by the vivaciousness and hospitality of the people who live there, not to mention that during that time of the year, the sun virtually never sets.

When I lived in Copenhagen, I cherished the summers, but I also knew there was a flip side to the season, specifically the long, dark and often very wet winters. My first winters abroad were especially dreary, compounded by my being pretty homesick.

However, I eventually learned how to deal with winter. I took up ice swimming in the harbor, I read lots of books in front of our wood-burning stove, and my husband and I invited friends over for dinner every Friday night.

The food I’d make for these dinners was never very complicated. Our home kitchen was sizable, but it always seemed to be the place where friends would hang out while the food was being made. So to keep things simple (and safe), I usually stuck to a two-course menu—entrée and cookies—where the entrée was always a simmered dish that would just need a few finishing touches once our friends had arrived.

My beer-braised lamb stew turned out to be the biggest crowd-pleaser, and I adored making it because it’s a one-pot dish. I’d set the finished stew in its big enamelware pot right on the dinner table, cut up some crusty bread, add a bowl of kale cream, a ramekin of cold butter and a bottle of red wine, and that’d be that.

On rainy days in San Francisco, the lamb stew is a favorite of mine to revisit, especially if we have friends coming over. It’s a comforting dish that reminds me that though the weather may be dreary, it’s all about making the most of the moment.

Once all the root vegetables have been prepped, throwing the rest of the stew together can be done quickly. I like giving the meat a quick coat of flour before I sear it because it thickens the simmering liquid a bit, but for a soupier consistency, I’d skip that step. The pilsner adds an earthiness to the dish, and I imagine a darker beer would make this even more pronounced, if desired.

FOR THE KALE CREAM

More recipes from the Kantine kitchen: