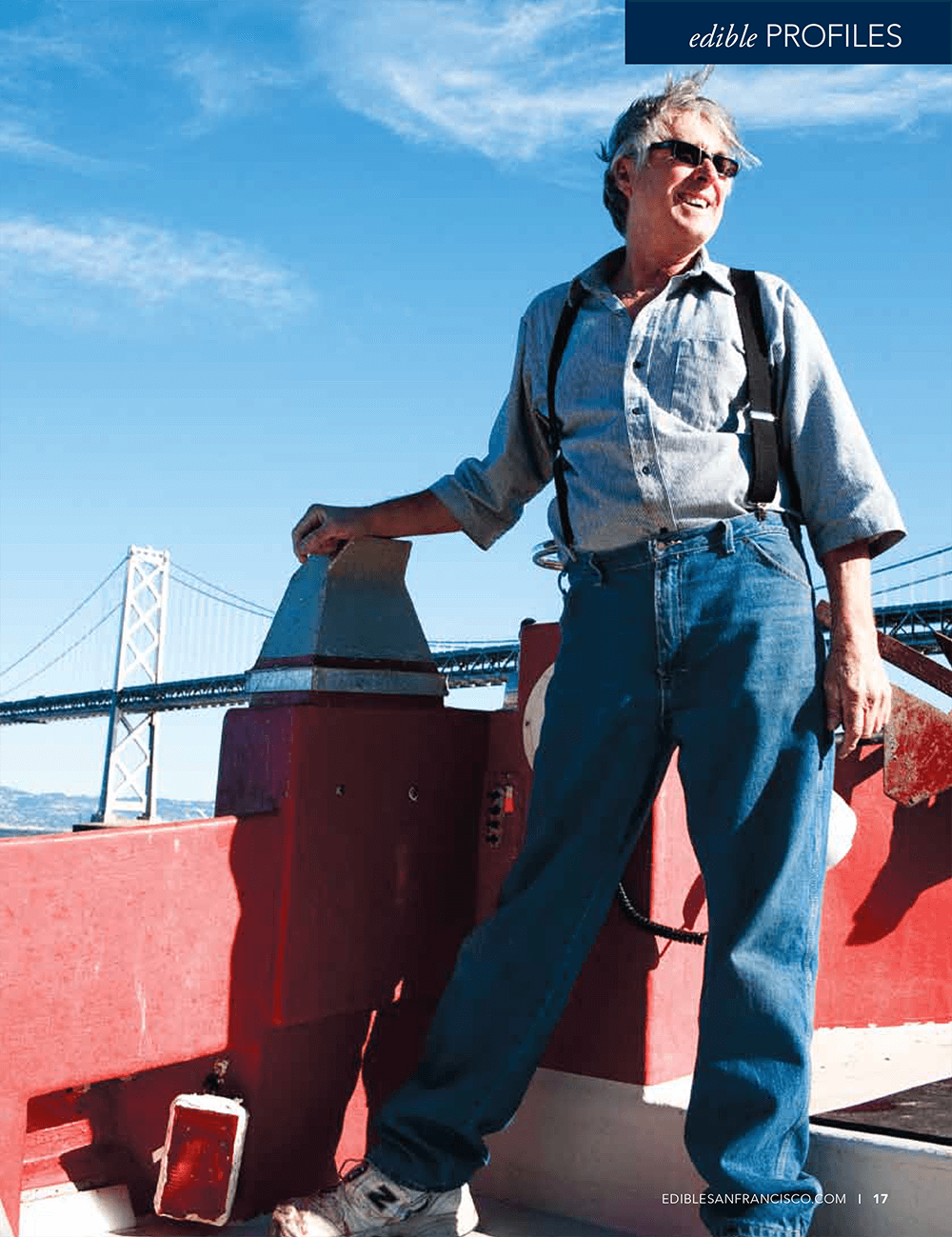 Catching Up with a Few of Our Favorite Bay Area Seafood Wranglers.

In the 1920s, a million pounds of herring were harvested annually from the San Francisco Bay, all of it for human consumption. Fisherman Ernie Koepf is hoping to revive that tradition by beginning once more to offer the local herring catch to restaurants and consumers alike.

Grew up in? Half Moon Bay

Name of your boat? Ursula B

Been fishing since? 1976 Only herring? I fish for salmon too. And I used to fish for albacore and crab.

But all of your herring catch previously went straight to Japan? Yes, for the sac-roe market. The herring are frozen and trans-shipped to Canada for processing; the roe are shipped on to Japan and the meat goes to other uses. Sometimes it just gets discarded.

And now you’re selling some locally? I lobbied Fish & Game for a regulation change to extend the fresh market season from November 1 to April 1 (the Forage Species Conservation and Management Act of 2011, AB 1299). Prior to that there was just a two-week window of opportunity, which was impractical.

How much of your catch is going to the fresh market now? 300 to 500 pounds a week, depending on demand. I work with Mel Wickliffe at Pier 45 Seafood, who supplies chefs and restaurants (Quince and Chez Panisse, for starters). Paul Johnson of Monterey Market in San Francisco and Berkeley is really interested in promoting it as well. Some of the catch also goes to Monterey.

No herring in Monterey Bay? No, it’s not an ocean fishery. There’s a run in the winter, in November, that comes into San Francisco Bay, Tomales Bay and Humboldt Bay. The peak of the spawning season is January.

What’s your usual catch? We got 15 tons the other night near Sausalito, and then we caught another 15 tons the next night. We’re landing 2,000 tons annually.

Is that sustainable? The biomass in SF Bay in last 35 years has averaged 45,000 tons. We are allowed to harvest 5% of that, which is known as the harvest ratio. It’s a sustainable rate.

Bycatch? Not too much. In the wintertime when fresh water flows into the Bay the sardines and anchovies move out to sea and the herring move in. We occasionally get some jack smelt. The fresh water really makes the Bay come alive. There’s more herring, more jack smelt, more everything. The Bay is much cleaner now than it used to be.

Do herring spawn with the tides? Herring usually spawn in the hours between 3am and daylight, so we begin fishing at night. We use two-inch mesh that harvests mostly 4-year-olds. That leaves the year-class of 2- and 3-year-olds untouched.

Anywhere you can’t fish? Years past, we’ve fished the waters next to Golden Gate National Recreational Area but they recently changed their policy to dictate that commercial fishing is not consistent with usage of parklands. We have a sustainable practice and a fishery management plan but the Park Service now claims jurisdiction out to 1,500 feet and we fish right on the shore where the herring spawn. It’s very selective and discriminatory.

Biggest thing ever caught in your net besides herring? A snag.