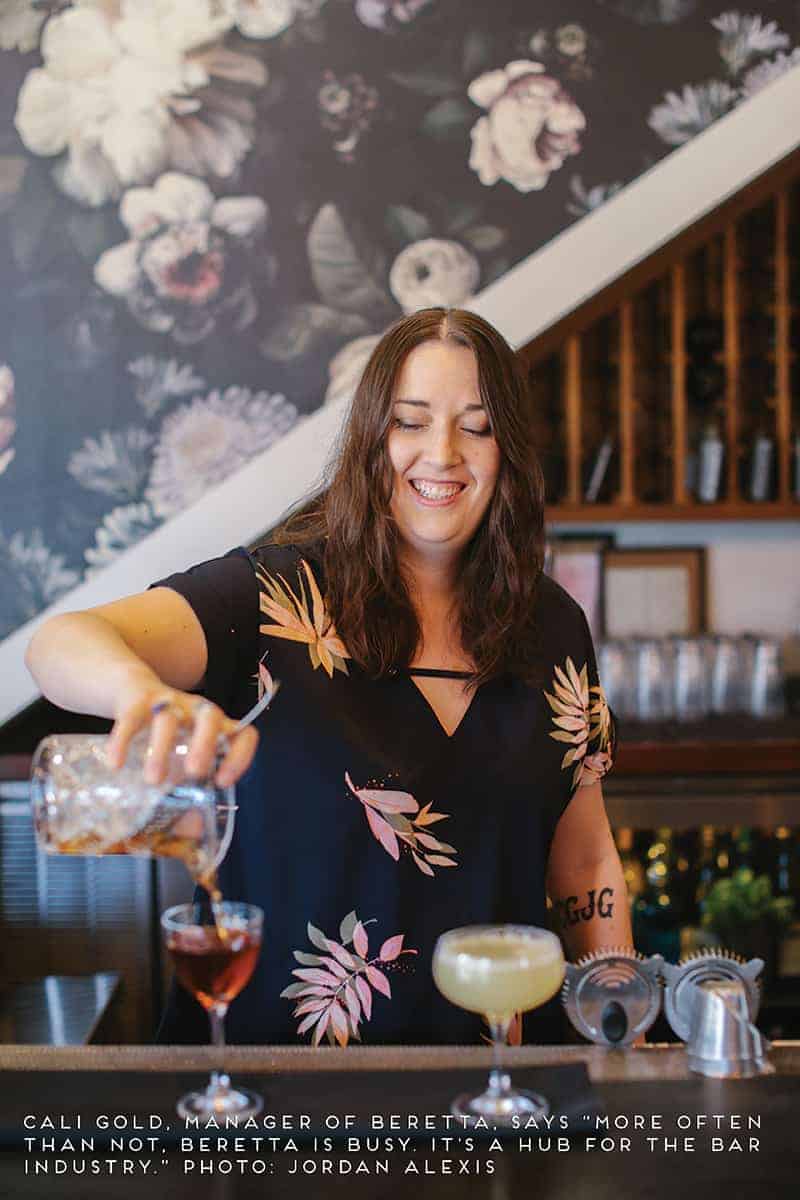 Whenever I go to Beretta, I opt to enter through the side door. That way, I can bypass the crowd that never seems to thin of people who are waiting for a table. I’m greeted by the melodic music that wafts through the speakers, the sound of laughter that ripples through the air and the reverberation of ice cracking in metal tins as cocktails are shaken two at a time. More often than not, I sit at the bar, which is the center of it all.

On this particular night, my timing is lucky because a seat at the bar has just opened up, a rare find. The bartender hands me a menu, which is gently illuminated by flickering candles. The stress of the day begins to evaporate as I settle into the cushy leather that lines my barstool. From the look of the other guests around me, it’s obvious that I’m not the only one relaxing.

Beretta, a small dark bar that specializes in cocktails and pizza, is on the corner of Valencia and 23rd Streets. It’s been there since 2008, when most of the action in the Mission was closer to 16th Street. Over the past 10 years, it has become a place to get a great cocktail, enjoy friendly service and find familiar faces. As I watch the bartender stir my drink, I can’t help but be reminded of all the people who have worked behind this bar. In the beginning, Beretta’s bar was staffed by industry veterans who helped make it what it is today; the bar gradually became an incubator for inexperienced bartenders. It’s been managed by people who have helped it achieve legacy status, a place that buzzes night after night, long after the sun has set.

It’s owned by restaurateur Adriano Paganini, who got his start through the Pasta Pomodoro chain. Paganini hired Thad Vogler, who now owns Bar Agricole and Trou Normand, to open the bar and allowed him free rein over the drinks program. “Beretta was super instructive in terms of how to build a good bar once I was unchecked,” Vogler says. “Adriano and I had a couple of meetings and then he had me write two paragraphs to be sure we understood exactly what we wanted to do. He’s really good at refining a concept.”

Once they had the concept down—an accessible cocktail-driven Italian restaurant—Vogler handpicked his bar team. He recruited many talented people who would later go on to own or manage their own bars, including Erik Adkins, Todd Smith, Jon Santer, Eric Johnson and, later, Ryan Fitzgerald, Lane Ford, Enrique Sanchez, Adam Wilson and Vince Lund. “We had a crazy opening team at Beretta, most of whom came from Bourbon & Branch,” says Santer. “It felt like we were hired guns. We were at the top of our game at that time. There was nobody better on the West Coast.”

Vogler put together the menu, which he workshopped with the staff to hone the recipes. “You learn really fast how to fix a cocktail when you have Jon Santer and Todd Smith and Thad Vogler and Eric Johnson all sitting around talking about it,” Ryan Fitzgerald recalls. “I learned how to streamline a cocktail. It was invaluable.”

The opening menu left a strong impression on drink writer Camper English. “Beretta’s first cocktail menu is one of my all-time favorites,” English says. I drank my way through it so many times. It’s not that it was wild with new flavors and ingredients that pushed the boundaries of what can be done to a cocktail, but that it embraced refined simplicity. Unlike many cocktail programs at the time, Vogler’s menu skipped all the muddling of farmers market fruit in favor of the basics: lime, lemon, grapefruit and pineapple. It was exacting—very specific spirits for each drink (including rhum agricole and mezcal, which were not in common circulation at the time), a range of sweeteners beyond simple syrup, and even the ice was dialed in for each drink.”

Eventually, many of the people from the opening bar team moved on to other projects. After Vogler left, Fitzgerald took over the drink program. Fitzgerald was deeply embedded in the local bar community and he took this as an opportunity to be an ambassador for Beretta, which allowed him to grow his network nationally. He participated in St-Germain’s Bartender Exchange Program and traveled to do three guest shifts at Drink in Boston. He often went to Tales of the Cocktail, a national bar convention that convenes in New Orleans each year. He participated in their Cocktail Apprenticeship Program, meeting many other people in the industry. He was invited to enter the Bar Brawl competition and led his team to victory in 2012, where he featured a mezcal cocktail that was inspired by Vogler’s Single Village Fix.

“It was a huge honor to win. It was crazy. It was the coolest thing, a lot of fun, and the greatest experience,” Fitzgerald says. Because of Fitzgerald’s work, Beretta became a permanent part of San Francisco’s “must visit” list for locals and tourists alike.

Beretta eventually transitioned into a place where people who were new to cocktails could come to learn how to bartend. Fitzgerald set up a rigorous training program. “I started working there in 2010,” says Donny Henderson, who worked there for over six years and now bartends at ABV. “Training was intense, but in a good way. I had to forget a lot of things I thought I knew and start with a blank sheet. I did prep five days a week and then earned a few barback shifts. After a year, I started to get some bar shifts but it was really beneficial to start with prep and then barback because I was able to learn all aspects of the bar.”

John Fragola started in 2013 as a barback. “My training was great because I learned from a lot of the systems that Thad had set up,” he says. Adam Wilson, who emphasized service, trained Fragola. “Adam taught me the every-10-second rule. This means that no matter what you’re doing—unloading the dishwasher, restocking glasses, or refilling water bottles—look at the bar top every 10 seconds and know what is happening. There is always something on the bar top that needs to be attended to, and the bar staff should be attentive. When I became a bartender, I passed this along to the barbacks that I’ve trained,” he says.

Dominic Alling took over the bar program in 2012 after Fitzgerald’s tenure ended. Alling was able to grow Beretta’s community of regulars, many of whom have come to see each other as lifelong friends. Michael Aldridge and his wife, Lisa Gould, have been regulars since 2008 when they would come in every weekend for brunch. Slowly, they migrated to the bar, where they met Alling. “There was one time that he put four or five variations of one cocktail in front of me and asked me for my opinion,” says Aldridge. “He had explanations for each one, and listened to what I liked best. He educated me along the way, and that’s how the friendships formed.”

Another couple, Lisa and Brent Marquez-Valenti, became regulars after Alling poured them an amaro flight on the night of their anniversary. “We felt a connection to the bar because they made an effort,” Lisa Marquez-Valenti says.

The bar staff facilitated friendships between groups of regulars. “Any time there is another regular sitting next to me, the bartenders introduce us to each other. The bartenders are really good at bringing people together,” says Aldridge. Special events, like weddings or Beretta’s annual Margarita Brawl competition, helped these friendships deepen. “Michael and I have been to their weddings, parties and gatherings. The sense of community makes Beretta feel different from other bars,” says Gould. In fact, the regulars became so close that they earned the nickname “the wall” when they were all together. “There would be seven or eight regulars all sitting at the bar together so the bartenders started calling us ‘the wall’ because we were almost like a defense,” says Brent Marquez-Valenti.

When Alling left his post as the bar manager in 2016 to pursue a job in another part of the industry, Cali Gold took over. “My goal as bar manager is to see Beretta continue to grow. I want the business, the base of regular clientele, and the staff to grow. I want to help my employees to grow and learn,” she says. She’s instituted a nightly cocktail special that begins at midnight, geared toward the other bartenders who work in the area who often come in for drinks and food after their respective shifts end. Because the kitchen is open until 1 a.m. and the bar until 2 a.m., Beretta has long been an industry hangout, which has earned them late-night business.

“More often than not, Beretta is busy. It’s a hub for the bar industry. Even dive bartenders come in,” says Fragola. The quality cocktails and pace at which food appears from the kitchen make it easy for bartenders to sink into their barstools, just as I have done too many times to count. “The drinks and the food are a perfect pairing. The food is relatively inexpensive, high-quality, liquor-absorbing and, most importantly, it came out at the pace of cocktails—within a few minutes of ordering,” says English. “I think that’s still the element that makes Beretta remain popular. It doesn’t feel like you’re sitting down for a slow dinner and having cocktails first, nor packing into the crowded bar area but not staying for dinner afterward, but having food and cocktails at the same time.”

As I slowly sip my cocktail and think about Beretta’s history, I’m acutely aware of how Vogler’s original menu moved the needle forward, as did Fitzgerald’s work as an ambassador for the bar, Alling’s dedication to hospitality and Gold’s desire to raise the standard for staff education. Whenever I take my seat here, I realize I’m just seeing a snapshot of everything that went into making Beretta’s place in San Francisco’s bar history unparalleled. “I truly believe that Beretta has earned legacy status,” says Fragola.