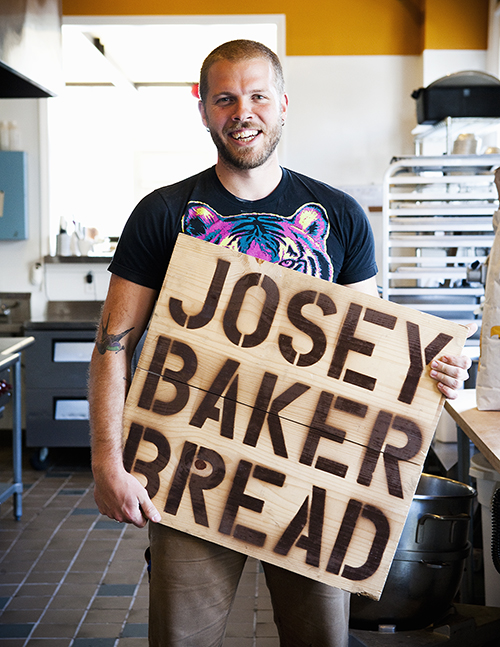 PREVIOUS ROAD: Curriculum designer for UC Berkeley and the Lawrence Hall of Science.
TURNING POINT: Finding love at his fingertips.

TRUE STORY: Josey’s last name is Baker. But beyond the family title, his talent for bread making comes just as naturally. He admits his background in science helped. “It gave me a super helpful outlook: Be meticulous about your process, pay close attention and find the reason for why things happen.” And while he learned the trade through trial and error, he is also quick to add that people in and outside the city were generous when it came to sharing their skills.

But no one can gift the passion Josey exhibits when he talks about dough.

“When I slash and load the bread, it’s phenomenal. The endorphins start flowing and I get very focused and meditative. And every single time when I peek through the windows and see the bread rising I think, ‘Holy shit. It’s actually working. Those little magic balls of dough are doing it again.”

This is what Josey lacked in his previous job–a schoolgirl obsession for the work. And it’s that love affair he hopes to pass on to others. Through his bread subscription service, he delivers loaves by bike to those who want them, offering a fresh alternative to store-bought bread that usually stales from up to 15 hours on the shelves. “I give people something they’re not used to: warm, outof- the-oven bread,” he says. “That’s really important to me.”

This summer, Josey will open a café bakery, called the Mill, in collaboration with FourBarrel Coffee, set in the Western Addition. He remains staunch about keeping batches small (a production of about 200 loaves a day) and customers happy. But that doesn’t mean the café won’t be a full-service stop. Doors will stay open seven days a week with a morning and afternoon bread bake Wednesday through Sunday. And pastries, coffee and a “by-the-slice” toast bar are all a part of the plan as well.

As for Josey’s passion, though, it’s the simplest element–the grains themselves–that continues to ignite the spark. “We have a love affair with white bread and I don’t have anything against it. It’s delicious,” he says. “But there are so many more possibilities for what bread can be.” Which is why he’s been fooling around with whole grains, experimenting with different types of wheat, rye and spelt. And a huge draw for the new location (for Josey and customers) is having the space to actually mill all of the whole-grain flours himself, on site. “It’s exciting, exhilarating, and nerve-wracking all at once.” And that’s what gives it chemistry.