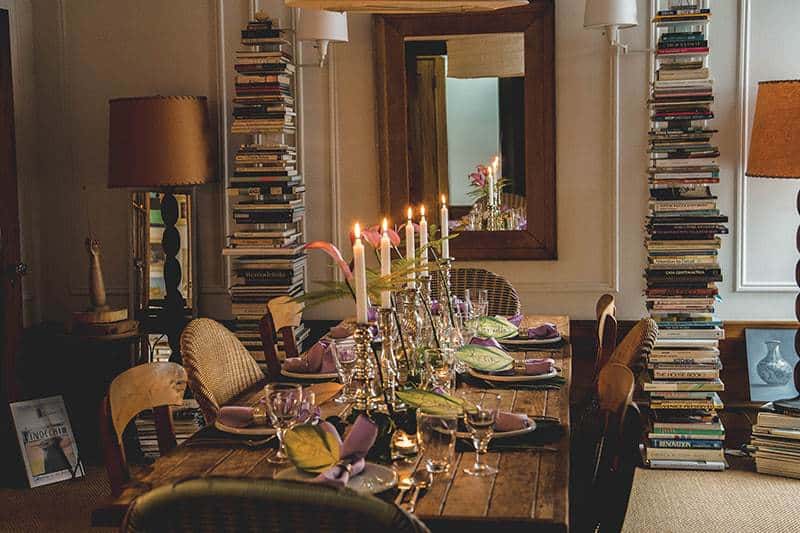 On a Saturday night in a two-story Victorian house at the edge of Alamo Square Park, Emilio Mesa’s table is surrounded by people who don’t want to leave it. Wine glasses are refilled, guests laugh without self-consciousness. This is the essence of sobremesa, a Spanish word whose meaning we can intuit but can’t directly translate into English. It’s the lingering discourse around the table when our bellies and hearts are full.

If sobremesa were embodied, Emilio Mesa, the newly appointed San Francisco ambassador for EatWith, would be that embodiment. EatWith is an international online marketplace that connects diners with local cooks who serve meals from their own homes in over 200 cities; its headquarters are in San Francisco. As the proprietor of Art of Hospitality with a clientele including Levi Strauss & Co., Mesa, hosting for EatWith for the last two years, has gotten an opportunity to do what he loves most: join together guests in an ambience of graciousness and impeccable timing with food to match.

I joined one of Mesa’s dinners in December with my husband. When you book with EatWith, you don’t know who your other companions will be. Mesa hosts up to ten guests at a time, and our eight dinner companions were SF professionals including the treasurer of Burning Man, a tech analyst, a PR consultant, a special-education teacher whose life passion is capoeira, and New York Times best-selling author Kevin Sessums. It was more a curation than the usual comparison of these kinds of dinners to a kitschy “Guess Who’s Coming to Dinner?” We quickly found our common grounds over an appetizer of perfectly flaked lentil turkey empanadas with homemade tomatillo sauce and the mutual feeling that we weren’t rushed—quite an elixir in itself.

It was an exquisite evening wherein every guest had something valuable to share and everyone listened. Two strangers squeezed hands across the table for a shared love of Emily Dickinson. The group became an ecology as we traded stories of pre-social media communication with party lines and eavesdropping grandmothers in Mississippi. For the whole evening, Mesa was there, sharing a humorous peek into life in the Dominican Republic and then offering sparkling water in the blink of an eye. Any host of a party knows how difficult it is to create this kind of alchemy. In what silence there was, food was being savored.

“The time slot is for three hours but guests often stay for four,” Mesa says with quiet pride. “I want everyone to share together,” while noting his theme MASA: Make America Sit Again.

He comes by this homegrown slogan honestly. “Life was hard, but all of our good memories were centered around the table, around sharing meals and the stories of the food. It came from the garden, the butcher, the market,” Mesa recalls. “I go to the flower and farmers markets every week to breathe beauty into this endeavor.” His family comes from the Dominican Republic, New York, Africa and Mexico with a dash of Taino and Sephardic Jew.

Mesa’s price points range from $60 to $104 per meal, drinks and fee included; the cook picks the price point and EatWith adds a 20% fee for its take. The dinner’s theme is California Caribbean with a main course of slow-roasted chicken shrimp sofrito and lemon-saffron rice, accompanied by a farmers market salad topped with cotija cheese. Dinner is served family style and the colors this evening are violet and green, the favorite colors of Mesa’s abuela.

For now, Mesa chooses not to make a dessert and instead offers the traditional coquito reincarnated through almond milk, coconut cream, agave syrup, rum and cinnamon. It goes down like melted coconut ice cream, even the virgin version. On a typically foggy day in San Francisco, the meal is a Caribbean escape—especially the bolitos de yucca, which are what gluten free was meant to be: cheese, cassava flour, oil and milk baked into a Caribbean version of gougères.

Mesa’s home is the perfect backdrop to the meal and the company, thanks to his and architect/designer Ian Murray’s aesthetic. The pale neutrals and warm woods are accented with wall galleries of art they’ve both collected, including a painting by Mesa’s nephew.

Mesa says it “feels like an offering, a healing, to provide an elegant meal that I’ve sourced from my mami and abuela.” EatWith knows the authenticity of Mesa’s statement because it ties in seamlessly with its branding campaign. EatWith is interesting in that it feels nontransactional and the experience is something most guests want to have again, so the currency runs on reviews and the buy-in to want more of this singular, sensory time and space.

EatWith was bought for an undisclosed amount in September 2017 by European VizEat, which has aggressively bought up its counterparts over the last few years. However, EatWith is retaining its own brand within the peer-to-peer business model, similar to airbnb.

The vetting process for a host to take part in EatWith is rigorous. EatWith’s team reviews the applicant’s home and menu with standards for the quality of the food, the uniqueness of the home, cleanliness and the passion of the host. According to Sasha Larkin, U.S. general manager, Mesa passed with flying colors. “We want to simultaneously strengthen and foster the SF community here, while VizEat’s acquisition means we can expand to more cities like New Orleans and regions like Southeast Asia.”

The genius of creating an intellectual property of sobremesa along with outsourcing the infrastructure of brick-and-mortar restaurants makes one wonder why EatWith didn’t show up to San Francisco sooner than 2014.

For SF hosts, it allows them to capitalize on their already existing (and hard-earned) space, and for guests it opens culinary and cultural time/space travel. It makes sense that in a globalized economy, we are looking for trust exchanges and the hyperlocal to be a part of our eating experience. Many diners do sign up to eat in their own city, which is a testament to the fact that it’s not just a voyeuristic desire to peer in on the culture of a country; we want to experience sobremesa no matter where we are and all the better if we get to dine with locals when we’re tourists. That was the impetus behind EatWith: the cofounder, Guy Michlin, while vacationing in Greece in 2012, ate at a private home and made a startup company based on widespread desire for this kind of experience.

As Mesa shapes the night with food, story and connection, this is the original social medium, and EatWith has merely hybridized the analog and the digital. EatWith hosts range from Michelin chefs to hobbyists, but there is a clear commonality of passion and skill. Food politics never tasted so good. And once inside Emilio Mesa’s home, you would swear you had known him and all your fellow diners for years as you share sobremesa with new old friends. I can’t wait to book more dinners.