Full Steam Ahead at Anchor Brewery 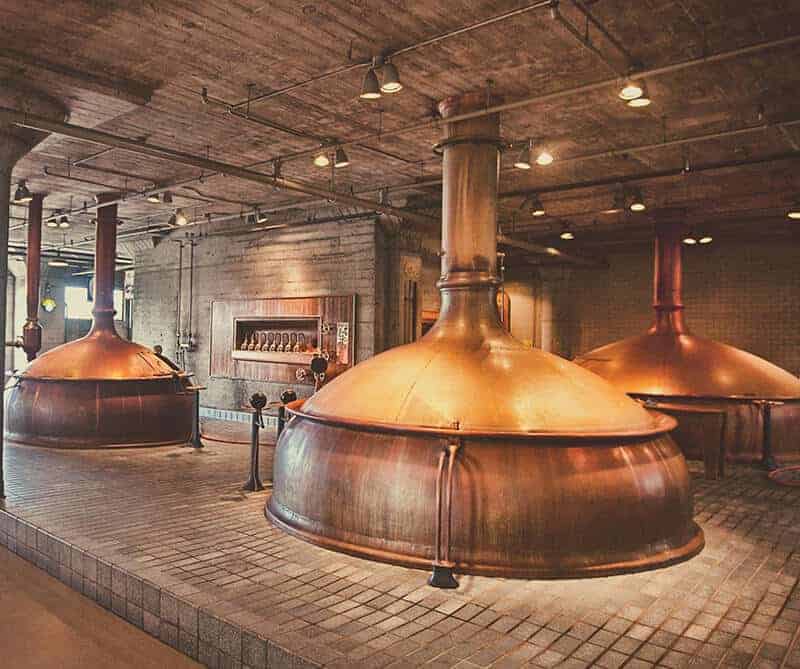 I was still at least two blocks away from Anchor Brewing and Distilling when the sweet, malty smell of cooking barley came wafting over, like those vapors that ensnare cartoon characters. It had the sugary grain aroma of a bowl of frosted flakes just drenched in milk—a scent that tapped such a deeply rooted happy memory, that to find the source in time for my tour, all I needed was to let the fragrance reel me in.

It led me to an unassuming pastry cream–yellow Potrero Hill building (and only location of the Anchor brewery and distillery) that is remarkable for its diminutive size, considering the worldwide distribution of its beer and distilled spirits. Like the biggest Hollywood actors, Anchor is smaller than you imagined it to be in real life.

The company is best known for Anchor Steam Beer, a style of lager beer that was common out of necessity—without access to refrigeration or ice, beer was cooled and fermented on the rooftops of breweries, giving it an almost constant halo of steam. With some interruptions, most notably the 13 years of Prohibition, Anchor Steam has been in production since 1896, when German brewer Ernst F. Baruth and his son-in-law, Otto Schinkel Jr., began production under the company name.

Anchor Brewing survived a long string of owners, locations, declining quality and near bankruptcies until 1965, when Fritz Maytag purchased a controlling share and ushered in the modern era of the brewery (and craft beer).

“I can tell you that Fritz loved the beer styles that he made, and really innovated quite a lot from a portfolio perspective, compared to what else was going on in the world, and in America specifically,” says Anchor brewmaster Scott Ungermann. “He had this deep appreciation for the history, and true traditional styles. Fritz didn’t follow trends (and didn’t have to).”

In the process of renovating the brewing systems, Maytag also upgraded the recipe for Anchor Steam, moving away from the additive-rich methods of the era to only using malt, hops and water—the more traditional methods. It was forward thinking by looking back.

Anchor followed that by introducing a porter, ale, barleywine and the first annual Christmas Ale in 1971, along with launching the flagship steam beer in bottles. The company grew to a dozen employees and soon overwhelmed the capacity of its 8th Street location.

The brewery has occupied its current spot since the late 1970s, in what was formerly a coffee roaster (that’s so San Francisco), and has so much stuffed into the various floors and clusters of rooms, so tightly economized in the space, that one wonders how they get anything inside or out anymore. Walking around the compact building on the tour feels a little like examining a Richard Scarry diagram of the inner workings of a brewery, with every turn revealing something new: fermenters (including some coolships—traditional open-top fermenters, like the one that used to cool beer on the rooftops for steam beer), the hop room, bottling and canning lines, and the cold cellar, where beer fining and final products get stored.

While the tour snakes through most of the building, you only manage to slither, unseen, past the other crucial component of Anchor located in that same building: the distillery.

Started in 1993, Anchor Distilling began with the idea of making the kind of rye whiskey that was being made by early pioneers in the United States. Starting with 100% malted rye, the company produces three different whiskies, each aged in a different manner. The Straight Rye gets aged in brand-new, charred American oak barrels, while the 18th Century is aged in toasted oak barrels, and the Hotaling’s is aged the longest, but in used barrels.

“When we did our first bottling of Old Potrero, which we bottled in early January of ’96, it was the only pot-distilled whiskey in the United States,” says head distiller Bruce Joseph.

Anchor’s distillery, even by today’s microdistillery standards, is tiny. Up until the recent addition of a new still from Scotland, Joseph and his crew of four distillers running three shifts a day were only able to produce enough new-make whiskey to fill five barrels a week. With the new still, that number has doubled.

“One of the issues we’ve had is that we’ve never been able to make as much whiskey as we would like,” says Joseph. “Because we could never make as much [whiskey] as we wanted, it prevented us from trying other things. Now we’re starting to play around with other stuff.”

This is perhaps the most interesting challenge ahead for Anchor Brewing and Distilling. For a company that built its reputation as a place creating high-quality traditional products, how does it meet growing competition and consumers’ demand for new products?

The number of craft distilleries and breweries in the U.S. has continued to increase, with breweries now cresting past 5,000. In 1996, when Anchor released Junipero London Dry Gin, the only other gins available were from the big producers and they had the market to themselves. That certainly isn’t true anymore.

On the brewery side, Anchor has begun releasing new styles of beer, including a dry-hopped Anchor Steam and Liberty IPA.

“Innovating off our core, that’s part of what we’re doing,” says brewmaster Ungermann.