What Makes an American Cookbook Part 2 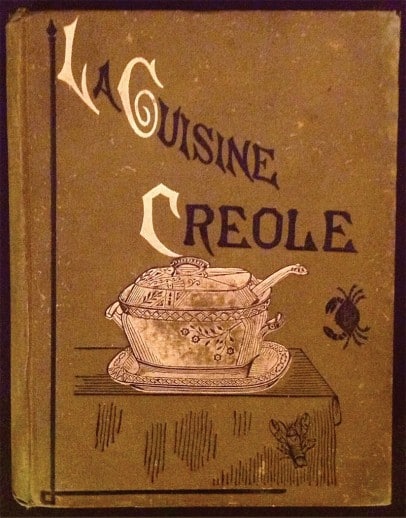 I am particularly fascinated by regional American cuisine. How it developed into its own niche begs two separate questions: from whence did people living in the area immigrate, and which foods are local to the area? The answers to these inform the origins of regional cuisine, whether fried smelts and lutefisk in Minnesota, fry bread and green chile pork stew in New Mexico, or Korean tacos in Los Angeles.

New Orleans got so worked up about its own special cuisine that it published the first two books on Creole books in the same year, 1885. Of these, Lafcadio Hearn’s La Cuisine Creole is considered one of the great classics of Creole cuisine, and the image in gilt on the front cover of a crab escaping from an elegant pot of soup has become iconic. Of Creole food, Hearn writes, “it partakes of the nature of its birthplace – New Orleans – which is cosmopolitan in nature, blending the characteristics of the American, French, Spanish, Italian, West Indian and Mexican…. There are also obvious influences from Native Americans, African Americans, and others in the American melting pot.” Among the numerous original recipes included in the books are Gombo file, pain perdu, fried frogs (grenouilles frites), jambolaya, and bouille-abaisse. New Orleans cocktails also make their debut here.

New Orleans comprises one of the most diverse melting pots in the United States, and its cuisine isn’t just regional to the South but microspecific to New Orleans itself. In fact, most of what one finds on their plate in New Orleans will not be found in the rest of the Southeast, and that’s borne out by the wide number of New Orleans cookbooks that have been published since 1885. One of the most important chroniclers of South Louisiana cuisine is John Folse, who authored The Evolution of Cajun and Creole Cuisine in 1990, and has gone on to revise and reprint not only this title but numerous others on the subjects of the fish, game and vegetables of Louisiana (each massive volume being over 500 pages). The sauces, rouxs and stocks all help distinguish Creole and Cajun cooking from any other. As Folse notes in his introduction, “As the young chefs of America travel into the bayous of South Louisiana and walk the French Market area of New Orleans, their creative juices cannot help but flow. The volumes of crawfish, crab, shrimp, oysters, wild game and other local ingredients lend themselves perfectly to the evolution process at the hands of these young masters.”

Creole and Cajun cuisine has not changed much in Louisiana over the last century, and while some may criticize it as a food culture that is overly enamored with its past, it’s also hard to argue with the adage, “if it ain’t broke, don’t fix it.” The New Orleans cookbooks of today are by many of the chefs well-known to the city: Susan Spicer, Donald Link, Emeril Lagasse, John Besh, et al. They haven’t so much evolved the cuisine as preserved it for future generations to enjoy and learn from.