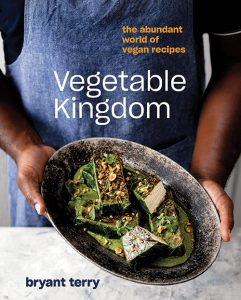 Vegetable Kingdom: The Abundant World of Vegan Recipes
By Bryant Terry | Ten Speed Press, February 2020
If you’re an omnivore trying to eat less meat, chances are you’ve got the makings for many vegan meals right in your pantry and fridge. San Francisco Bay Area author Bryant Terry’s new book has 100 flavor-driven recipes that combine the basics of vegan cooking into nutritious and delicious meals. Terry is a James Beard Award-winning chef currently in his fifth year as chef-in-residence at the Museum of the African Diaspora in San Francisco. 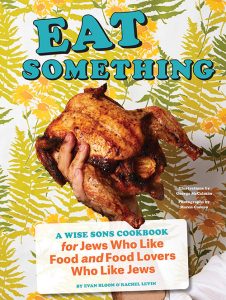 Eat Something: A Wise Sons Cookbook for Jews Who Like Food and Food Lovers Who Like Jews
By Evan Bloom and Rachel Levin | Chronicle Books, March 2020
From pastrami tacos to kimchi latkes, Evan Bloom of San Francisco’s Wise Sons first book includes sixty-plus recipes for salads, soups, baked goods, holiday dishes and more. The book is organized by different events and celebrations, such as First Meal Home from College, Dinner with the Goyim In-Laws and Shivah’s Siver Lining. It also features illustrations by George MacCalman 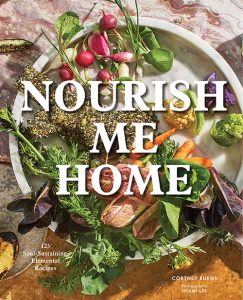 Nourish Me Home: 125 Soul-Sustaining, Elemental Recipes
By Cortney Burns | Chronicle Books, June 2020
Former Bar Tartine Chef Cortney Burns pays homage to the seasons and the elements of water, fire, air and ether in her vegetable-forward book that also emphasizes techniques for turning proteins into side dishes or seasonings, rather than main dishes. There are plenty of fermented dishes as well, including yellow eggs with pickle-brined brown rice and crepes, and turmeric-pickled Scotch eggs. 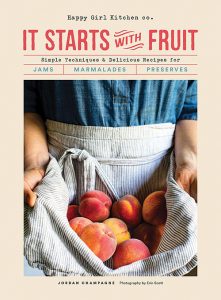 It Starts with Fruit: Simple Techniques and Delicious Recipes for Jams, Marmalades, and Preserves by Jordan Champagne  Chronicle Books, May 2020
Happy Girl Kitchen Co., the only active cannery in Monterey County, is probably best known for their Good Food Award Winning pickles (or maybe it’s the jarred tomatoes?). But for her first book, founder Jordan Champagne goes all-in on fruit with recipes for raspberry lemon jam, pink grapefruit marmalade, honeyed apricots and peach rosemary syrup, as well as recipes to turn those preserves into jam bars, fruit cobbler and homemade toaster pastries. 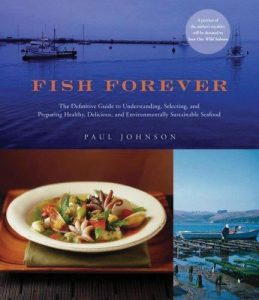 Fish Forever: The Definitive Guide to Understanding, Selecting, and Preparing Healthy, Delicious, and Environmentally Sustainable Seafood by Paul Johnson | Wiley and Sons, 2007
We’ve been making the coriander-crusted tuna recipe from this book for ages, which is a testament to the reliability of the dishes in this 400+ page tome. Johnson, the owner of Monterey Fish Market in Berkeley as well as a wholesale operation at Pier 33, lists 70 different species of today’s least endangered, least-contaminated, best-tasting fish and shellfish. If you live on the West Coast, consider this book your seafood bible. “What Johnson doesn’t know about fish is, frankly, not worth knowing.” (New York Times Book Review, December 2, 2007) 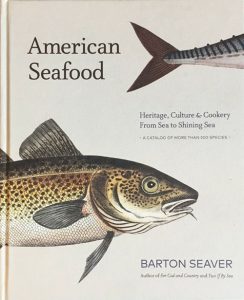 American Seafood Heritage, Culture & Cookery From Sea to Shining Sea by Barton Seaver | Sterling Epicure, 2017
Seaver, head of the sustainable seafood and health initiative at the Center for Health and the Global Environment at the Harvard School of Public Health, has put together a complete catalog and culinary history of American seafood. There are ten pages on flounder alone! Sans recipes, the book is jammed with photos and illustrations of fish (and fishermen) you’ve probably never heard of or even seen. Goatfish anyone? 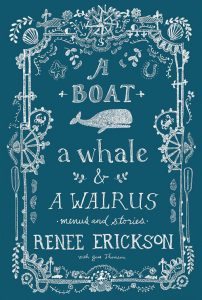 A Boat, a Whale & a Walrus: Menus and Stories
By Renee Erickson | Sasquatch Books, 2014
We can’t open this gorgeous blue book without being inspired to cook from it. Everything seems doable and delectable. Erickson is the chef and the owner of the Seattle restaurants: The Whale Wins, Boat Street Café, The Walrus and the Carpenter, and Bateau. She has the Pudget Sound at her door and has put together seasonal recipe menus that are as at home in the Bay Area as they are in the Pacific Northwest. 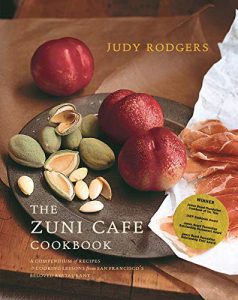 The Zuni Cafe Cookbook: A Compendium of Recipes and Cooking
Lessons from San Francisco’s Beloved Restaurant
By Judy Rodgers | W. W. Norton & Company, 2002
Not a seafood cookbook per se, but if you live in San Francisco, this book deserves a spot on your bookshelf just the same. Rodgers precise technique and instructions are your guide to crispy pan-fried sand dabs (our signature flatfish). Her master class on Piccolo Fritto, which includes squid, scallops and skate, as well as vegetables of all kinds, will serve you forever when it comes to sliding anything dipped in batter into hot oil. 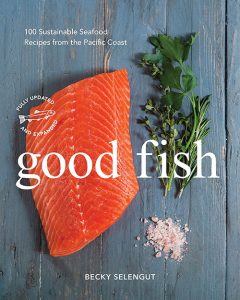 Good Fish: Sustainable Seafood Recipes from the Pacific Coast
By Becky Selengut | Sasquatch Books, 2011
First things first, Selengut’s video on YouTube showing how to filet a whole salmon is a must-see guide if you’re buying a whole salmon this season to filet at home. Not to mention, Good Fish has more than its fair share of salmon recipes, so consider that a one-two punch. Selengut’s book is an excellent guide, telling consumers what to look for when purchasing seafood, as well as all-important techniques for storing it at home. Recipes include favorites such as albacore tuna, Pacific cod, Arctic char, mahimahi, wahoo (or ono), sardines and even herring.

West Coast Seafood: The Complete Cookbook
By Jay Harlow | Sasquatch Books, 1999
At twenty years plus, this definitive West Coast seafood cookbook from Jay Harlow is still as relevant as ever and includes over 250 recipes for finfish and shellfish, ocean as well as freshwater catch from California to Alaska. As Karola Saekel, former San Francisco Chronicle food writer noted in her 1999 review, “all of Harlow’s recipes meet the three essential C’s: They’re clear, concise and consumer-friendly.”