Hog Island Oysters: A Hit on the Half Shell 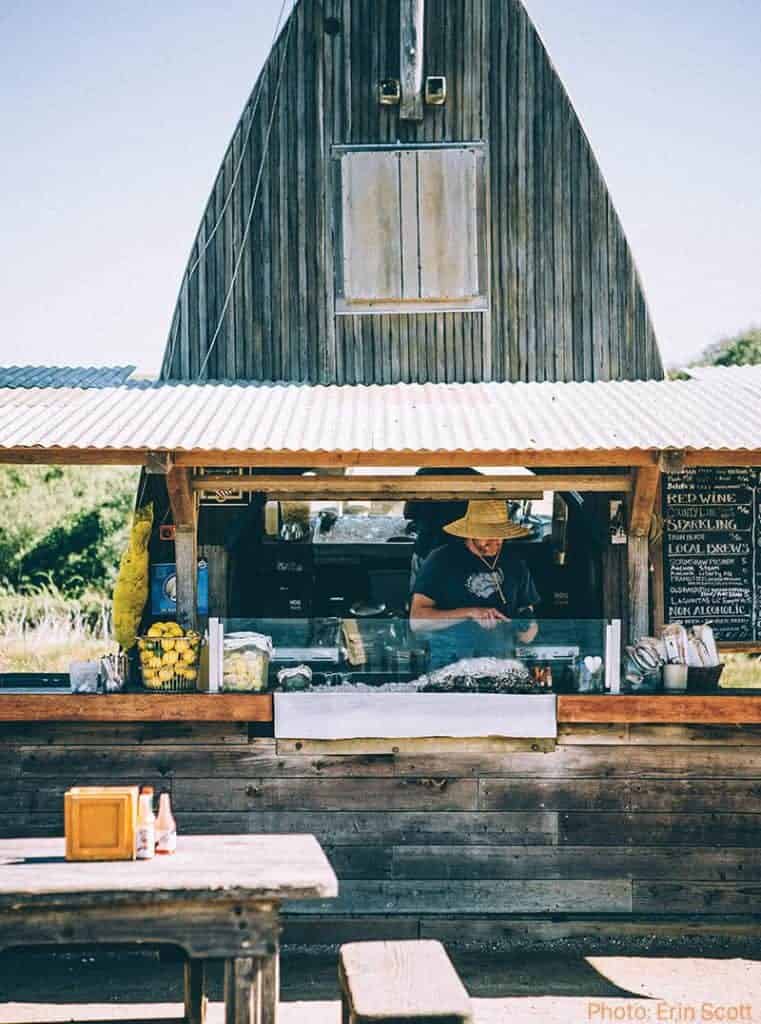 Hog Island Oyster Company, the shellfish farm, was started by two marine biologists who borrowed $500 from parents and a boat from neighbors to begin cultivating coveted briny bivalves in the intertidal waters of Tomales Bay, a slender, pristine estuary about a 90-minute drive north of San Francisco.

That was more than 30 years ago. But Hog Island still has a chilled out, seafood-shack sensibility. The laid-back vibe begins at the top with owners John Finger and Terry Sawyer, two sea dogs whose sun-weathered faces attest to lifetimes lived by the water. And yet these partners are serious stewards of the sea—and grow slurp-worthy oysters.

Hog Island oysters have quite the cult following. Finger and Sawyer preside over a $20 million operation that employs almost 200, including more than 50 at the Marshall farm. The company harvests over 3.5 million oysters, clams, and mussels a year, which it sells at the farm, its popular oyster bars in San Francisco and Napa, and to select Bay Area restaurant clients. Most days of the year, oyster fans can be found on the flagship farm happily downing salty, live, raw, meaty morsels off the half shell. Hog Island’s signature Pacific oysters, dubbed Sweetwaters, promise a sweet oyster liquor, smoky finish, and deep-cupped fluted shells, thanks to the rack-and-bag farming technique favored by the farm.

These shellfish farmers have shucked too many oysters to count. In the early years, the pair was out on the bay every day, with their heads down and their hands on every aspect of the oyster operation. More recently, as they both reach milestone birthdays, they’re focusing on succession planning and long-term strategic thinking for the company, and scientific research and policy work for the industry. “If I can pave the way for other oyster farmers on the California coast, then that’s a good thing,” says John Finger, 60. “I love showing oyster growers what we do, and I love going to other oyster farms. It’s a blast.”

It’s been hard work, of course, long hours, and unpredictable conditions. But these oystermen understand the rewards. “You get a full sensory connection to your food out here,” says Terry Sawyer, also 60. “It’s the smell of the sea, the look of the land, the sting of the sun and wind, the sound of the water and, of course, the taste of the ocean in our oysters. It doesn’t get much better than that.”

Climate change is a challenge and has caused significant oyster seed shortages in recent years, in large part due to ocean acidification—climate change’s caustic cousin. Overly acidic ocean conditions—courtesy of fossil fuels—are harmful to oyster shells, which need more alkaline conditions to develop their protective coverings. Hog Island has taken a leadership role in tackling this environmental conundrum. The aquaculturalists are working with marine scientists to counter the impact this sea change has on shellfish habitat (it’s responsible for killing billions of baby oysters in the Pacific Northwest, a significant source of oyster seeds for farms like Hog Island). They’re also out in front on political outreach and public education.

The Hog Island crew closely monitors changes in water temperature, salinity, oxygen, and pH at the farm and adjusts to shifting conditions as needed. The farm is looking beyond science for solutions. Hog Island has opened its own oyster hatchery in Northern California’s Humboldt Bay that will provide spat, or baby oysters, for the Marshall farm and other growers. “We never thought we’d need to go into the hatchery business, but the oyster seed shortage changed that,” explains Finger. The company sources them from Washington, Oregon, and Hawaii. It produces about two-thirds of the oysters it sells, and buys from East Coast and Pacific Northwest oyster farmers to round out its menu.

On any given day, some three million oysters are growing at Hog Island. The farm shoots to harvest about four million oysters per year but mortality rates are high—around 40 percent. It’s an industry hazard that oyster farmers plan for. Ocean acidification doesn’t help an oyster’s odds of making it to the juicy size consumers have come to expect at Hog Island. But for now, these farmers are doing all they can to help this vulnerable shellfish survive and prosper.

Oysters are the ultimate sustainable seafood. They play a role in keeping seawater clean by flushing pollutants out as they feed on plankton and algae. From seed to harvest, an oyster takes about a year to grow, though waiting an additional year allows shells to deepen and harden and meat to plump up. Hog Island’s Sweetwaters take about 18 months before they’re ready to eat.

Hog Island’s location in rural West Marin, home to small-scale dairy farms and cattle ranches, has long been protected from encroaching urban demands. The farm sits close to a land mass called Hog Island. Little more than two acres in size, the island earned its name after a barge broke loose and left behind a posse of pigs, according to local legend.

Despite the bucolic setting, there are other pressures on its natural resources. “We have to have an awareness of what’s happening with land use, too, because that impacts our farm,” explains Sawyer. “We’re downstream from everything that happens on the land—agriculture, cars, humans, development—it all impacts us.”

The farm is an extended family affair: Terry’s son helps handle the new seed operation at the Humboldt Bay hatchery; John’s son is the farm manager at Marshall. Both owners wives play roles in the business and two of Terry’s daughters work on the catering side. “We told our kids you can be on a farm crew, but you have to earn your spots,” says Finger. “And we don’t manage our kids; we let someone else on the team do that. It works better for everyone.” There are also husband-and-wife coworkers and employees who have clocked 20 years with the company; some of their children work there, too.

The longtime oystermen reflect on their changing roles and a partnership that has endured. “It’s been good for us to step back from the day-to-day management of the farm,” says Finger. “I’m looking at big-picture policy concerns, and Terry is tackling the research end of things, which, as marine biologists, brings us back full circle to the science of what we do.”

The pair knew their fascination with the sea would keep them close to the water. And they always wanted to interact with people rather than work in isolation. They’ve been fortunate, because of their farm and the food they produce, that the world comes to them.

And through all the ups and downs of running a farm together their friendship has never wavered. Says Sawyer: “I couldn’t think of anyone else that I would have wanted to run a business with at this level—or for this long.” Adds Finger: “We respect the hell out of each other; we’ve never questioned the other’s integrity or commitment to work.” And like all good friends, they remind each other
to have a little fun with it, too.