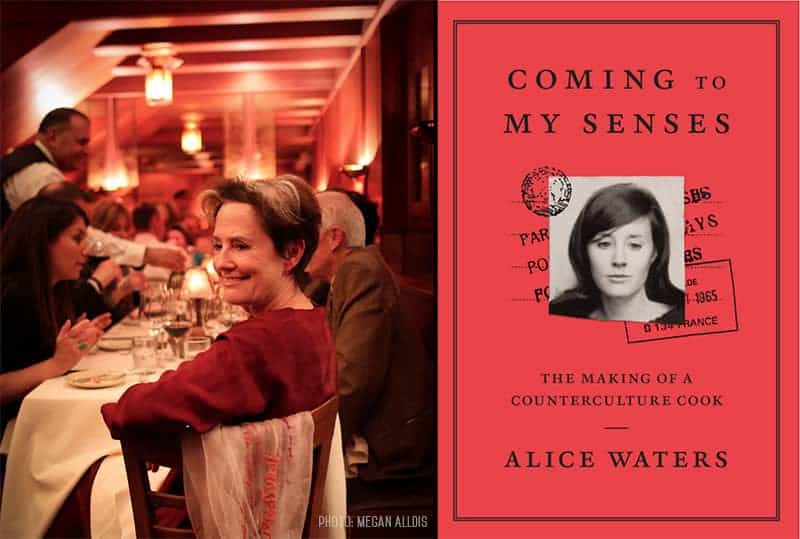 Something remarkable happens about 40 pages into Coming to My Senses, Alice Waters’s memoir of her life before Chez Panisse. You think: she’s just like me! She got sent to the cloakroom for talking too much in class? So did I! She never played with dolls and dressed in a head-to-toe cowboy outfit on Christmas? So did I! Mario Savio was her hero and mentor? He was my math teacher in high school! The remarkable thing about Alice Waters is, you probably never thought she was anything like you before reading this memoir. Her ethereal presence, her utopian vision, her thrilled embrace of a solitary piece of fruit actually sufficing for dessert, all seem otherworldly. We earthbound mortals accept limitations to our visions. We don’t speak in a whisper. We want a Hostess cupcake once in a while. But here is an Alice we can relate to, someone who could have been us.

Waters starts off her memoir in New Jersey, where she was born the third of four girls, all too far apart in age to really be childhood friends. While her parents grew some vegetables, after creating a Victory Garden during World War II the family piled into the car to drive over to Howard Johnson’s for clam strips and ice cream (cherry vanilla being Alice’s—and my wife, Paula’s—favorite flavor). Young Alice would steal a nickel out of her mother’s purse and sneak around the corner to flag down the Good Humor man and buy a cherry lime popsicle. She grew up like most suburban kids in the 1940s and ’50s, eating food that came in cans or frozen packages, or made in large quantities by her mother. When she was born, Eleanor Roosevelt was in the White House championing “health foods” that were generally white and bland: potatoes, rice, white bread. A dire time for the American palate, if there ever was one. Alice’s first job was as a carhop in Michigan City, Indiana, riding around on roller skates delivering hamburgers and Cokes to kids at a drive-in. Her second job was at a hot dog stand.

As with so many foodies-of-a-certain-age, Alice’s “aha” moment around food came on her first trip to France, when she took an unauthorized year abroad from UC Berkeley. (She estimates she attended one or two classes at the Sorbonne, and “definitely didn’t pass.”) She and a friend lived on the Avenue des Gobelins, near rue Mouffettard, one of the most famous market streets in Paris. They strode up and down the market, tasting fresh fruit, charcuterie, and vegetables whose flavors exploded in their mouths like nothing they’d ever eaten before. A simple restaurant in Brittany served three courses with no choices—a “blueprint for Chez Panisse,” as Waters puts it. A later visit to the South of France introduced her to mesclun lettuces, and she was so taken with them that she brought the seeds back to California to plant. Served at Chez Panisse, they caught on with other chefs. Waters humbly claims that if she has anything to be proud of, it’s introducing mesclun lettuces to America.

For a long while, I couldn’t figure out why some of the passages in the book were in italics, and some not. It finally dawned on me that the italicized passages were about her future self, the self who planned and opened Chez Panisse. I love these passages because they connect the past to the recent past so brilliantly. After writing about her childhood with her parents for a while, she’ll go into italics and talk about the year her parents came to California and helped her find a farmer who could grow food exclusively for Chez Panisse, and observes that her father, neat and orderly, found perfection in imperfection when he stumbled on Bob Cannard, whose messy fields hid perfect carrots below the earth. Her insight that her father had a remarkable ability to see something totally unlike himself in another person and still see the benefit, was both moving and well put. We watch Alice evolve into the person who will open one of America’s most famous restaurants, who will champion fresh local produce and school gardens, who will help presidents set up White House gardens. And we root for her, because she’s just like us when she starts out.

Being in the food business, you hear a lot of gossip. The most consistent criticisms I’ve heard about Alice Waters are that she doesn’t give credit where credit is due, and that she’s unrealistic in her expectations. To the first point, I direct you to read this memoir, in which she constantly compliments and credits mentors, ideas and recipes. To the second point, I’ve always countered that she is a Utopian, and there frankly aren’t enough Utopians in the world. It’s OK to aim for the moon, even if you don’t quite get there. She’s done a lot more than we have to advance her cause; in that way, I can say she’s not like me at all, but I can aim to achieve half of what she has and be happy.

The Book Mongers Book Review – Coming to My Senses: The Making of a Counterculture Cook was originally published in the Fall issue © 2017 Edible San Francisco.

Previous Post: « Food and Work: Are Meal Kits the Answer?
Next Post: The Future of Salmon: Can They Be Saved? »