The Book Mongers Book Review: A Boat, a Whale and a Walrus 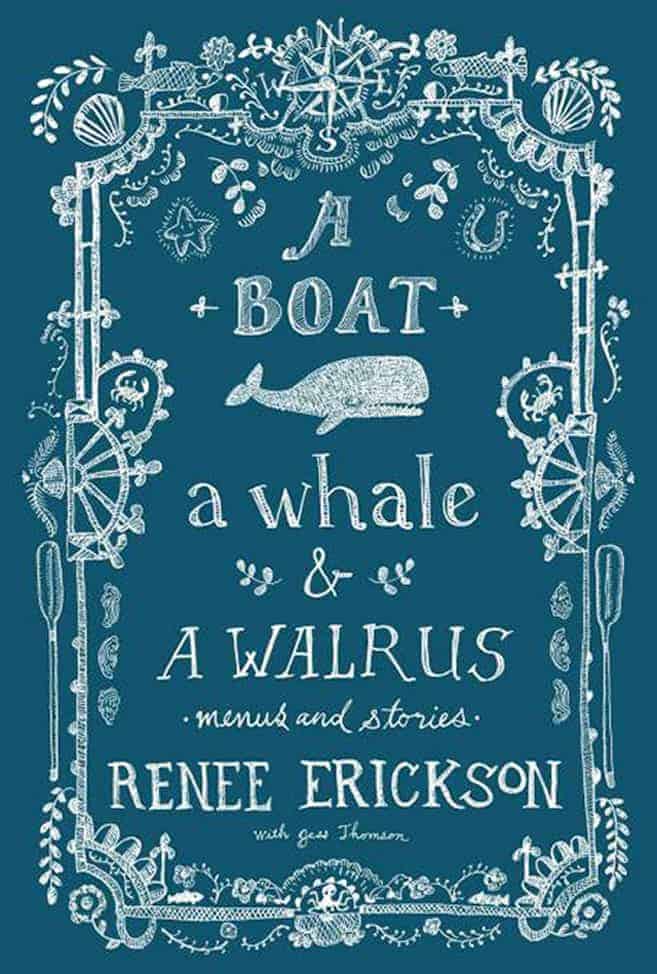 A Boat, a Whale and a Walrus, Menus and Stories, by Renee Erickson

I’ll admit it: I’m finally over the whole “photo from above of beautiful food on vintage china, placed on reclaimed wood farm table, next to dishcloth napkin set with tarnished silverware, printed on matte paper” cookbook spread.

This look has filtered down over the last six years from the hippest British and Australian imports that were trying to convey the feeling of actual farmhouse cookery, to by now becoming wholly ubiquitous while bearing no relationship to the subject in question: tamales on English ironstone platters, Thai noodles on paint-stripped Amish country tables … it’s devolved into thoughtless, purposeless design.

That said, I can’t help but be charmed by the use of this genre in a new cookbook from the Northwest. Renee Erickson is the chef/owner at The Walrus and the Carpenter and three other wonderful restaurants in Seattle. She and her team incorporate this design into a book that actually proves an apt vehicle. Erickson shares black-and-white photographs of the restaurant’s provisioners—farmers, fishers, foragers—against the backdrops of their milieu.

The luscious image of a skiff on a calm blue sea on the endpapers evokes a sense of place, a spiritual vision of the Northwest that puts you on the shore, looking out to breathe in the salty air. And while the four restaurants Erickson owns don’t share the shabby-chic aesthetic of the book, somehow the look works to support the narrative and recipes within.

Arranged seasonally, these recipes are simple enough to be familiar, yet add ingredients that are not: King Salmon with Walnut Tarator (a traditional Balkan dish with the consistency of hummus); Ricotta Tartine with Pickled Scapes and Fennel; Honeyed Rice Pudding with Wild Strawberries. She’s really into pickling, but makes it sound easy and enjoyable, rather than a supposedly fun thing you’ll never do again.

While some ingredients will be a challenge to obtain (herring roe is an excellent example), and others will take some commitment (anchovies that will take a week to marinate in chili for a tartine dish), these are worth the effort because the results are sublime. And there are plenty of quick but thoughtful recipes to whip out on a weeknight.

Erickson provides full menus for Fourth of July Crab Feasts, New Year’s Eve Celebrations, even her own birthday meal. These menus, along with the stories behind them, accompanying photos of action and finished plates, somehow manage to make the reader feel included rather than excluded, which is key to putting one in the state of mind to cook. Not, “They’re having more fun than I ever could,” but “I am totally doing that with my friends next weekend!”

So while I think the “farm-to-table” cookbook design concept has sailed, I don’t mind being in the same boat with chef Renee.