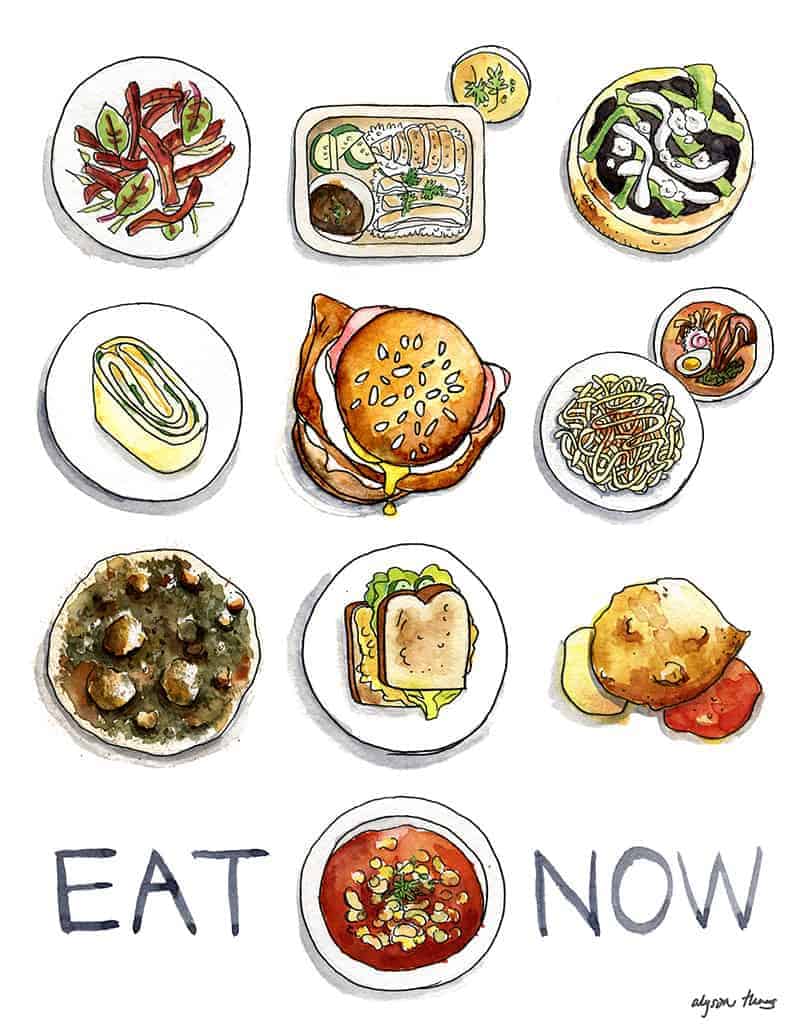 Jessica Battilana’s ten things to eat right now including the sopes playeros at Cala, the omelet at Petit Crenn, hush puppies at Pizza Del Popolo and the kwati at Binis.

“Original” Chicken Rice at Rooster and Rice It’s surprising to find a good version of beloved Thai street-food standard khao mun gai on the streets of the Marina, but that’s where to go for an order of juicy poached chicken, its skin gone floppy. The comforting dish is ugly to look at and wonderful to eat, served with chicken fat–suffused jasmine rice and an irresistible condiment made from chiles, ginger, garlic and fermented soybeans. As is traditional, a palate-cleansing cup of light chicken stock is served alongside, to turn to once you’ve scraped every bit of meat, rice and chile sauce from the to-go container. 2211 Filbert St.  415-776-3647 roosterandrice.com

Sopes Playeros at Cala The chef of the hour is Gabriela Cámara. She has four restaurants in Mexico, including Contramar in Mexico City, which is much beloved among the food cognoscenti, and opened her debut American restaurant, the seafood-focused Cala, in Hayes Valley in September. Not everything is yet perfect here, but it’s possible to catch glimpses of Cámara’s excellence. One way: with an order of the sopes playeros, tender disks of fried masa, their edges pinched up to form rafts on which spoonfuls of deeply flavored black beans luxuriate, topped with crema, shredded lettuce and ricotta salata. I’ve had sopes before, or so I thought, but Cámara’s version had me tasting it for the first time. 149 Fell St. 415-660-7701 calarestaurant.com

Omelet at Petit Crenn If Dominique Crenn’s flagship restaurant, Atelier Crenn, incorporates some of the ingredients she grew up eating in her native Brittany, her sophomore effort, Petit Crenn, aims to present much more straightforward versions of classic Breton dishes. At the all-day restaurant, you can have buckwheat crepes, Far Breton cake and vichyssoise, as well as Crenn’s version of an omelet. Her hybridized French-Japanese omelet is made by whisking eggs with a splash of fish stock, then cooking them in a square pan in clarified Breton butter, like tamagoyaki wearing a beret. The omelet is rolled into a cylinder, presented on a thin rectangular plate that’s just the right size, and dusted with fines herbes, mais oui. 609 Hayes St.  415-864-1744 petitcrenn.com

Fried Chicken and Egg Sandwich at Salumeria  A crispy chicken cutlet on a soft bun hardly needs embellishment. It does not need, for example, a fried egg, which oozes its golden guts all over the sandwich. It does not need a curl of prosciutto. And it certainly does not need to be anchored to the plate with butter-rich chile-spiked hollandaise sauce. Then again, Cher did not need Sonny, and Simon didn’t need Garfunkel. Some things are just better together. 3000 20th St.  415-471-2998  salumeriasf.com

Tsukeman Ramen at Iza In the great ramen wars of our decade, I remain neutral, the Switzerland of soup. Because after all the alkaline noodle analysis, the deconstruction of the broth, that’s what it is—soup—and not something for which I’m likely to head to the South Bay on a weeknight. I like the tsukeman ramen at Iza very much, not least of all because it’s in my neighborhood and the hordes have not yet descended. The chashu pork pinwheel is fatty and tender, the broth has a salty, smoky depth courtesy of generous amounts of bonito, and the noodles remain toothsome until I’ve slurped the dregs from the bottom of my bowl. 237 Fillmore St.  415-926-8273 izaramen.com

Man’oushe at Reem’s There’s a moth-to-the-flame thing that happens at Reem’s weekly stand at the Mission farmers market. It’s hypnotizing to watch proprietress Reem Assil, a one-time labor organizer turned baker, throw rounds of man’oushe dough—a yeasted Lebanese flatbread—onto a convex saj griddle, where it puffs and singes. With a squeeze bottle she anoints each with a generous amount of za’atar, a blend of wild thyme, sumac, sesame seeds, salt and olive oil. It’s still warm when she hands it to you, a warmth matched by the Arab hospitality Assil brings to a Mission alley one night a week. Mission Community Market; 22nd & Bartlett St.; Thursdays only 510-717-1011 reemscalifornia.com

Egg Salad Sandwich at Charlie’s Charlie’s looks like—is—an ordinary deli on the corner near Precita Park, one whose motto is “home of the full tummy.” When you order an egg salad sandwich, the maker begins with two hard-boiled eggs, which he peels and mashes with mayonnaise to order, before slathering the bespoke egg salad on your choice of bread and topping it with the works—lettuce, tomato slices, pickled jalapeño chiles and dill pickle slices. It’s a triumph of the genre, and a seven-dollar taste of a San Francisco that’s fast disappearing. 3202 Folsom St. 415-641-5151

Hush Puppies at Pizza del Popolo It’s likely not the promise of hush puppies that will deliver you to Pizza del Popolo’s new brick-and-mortar location, and the pizzas here—cooked in a wood-fired oven—are every bit as good as the ones you previously could only get from the pizzeria on wheels. But since you’re there, you might as well try the craggy, golden hush puppies, fried orbs of Anson Mills cornmeal that are crunchy on the outside and soft within, made for swabbing through the honey butter and house-made hot sauce.855 Bush St.  415-589-7940 delpoloposf.com

Kwati at Bini’s Years ago I worked in a downtown office, and on particularly glum days, of which there were a few, I’d spend most of my lunch break wandering Union Square, then quickly scarf down a hot dog from a nondescript stand before bulleting back to my desk. My former hot dog stand, near the Montgomery Street BART station, is now home to Bini’s Kitchen. Bini Pradham is a La Cocina program participant who incubated her Nepalese food business at the nonprofit, a single mother who left her abusive husband and found her footing through the food of her youth. She’s justly famous for her momos, tender Nepalese dumplings (I like the turkey variety). But the kwati, which is available at the former hot dog shack, is what I’ll be returning for all winter long. The soup, made with a blend of nine different sprouted beans, from mung beans to black-eyed peas, is spicy and tangy, reminiscent of Indian dal, and is the sort of rib-sticking, healthful food to see you through until spring. 2948 Folsom St.  415-361-6911 biniskitchen.com

Fried Pig Ears at Oro {EDITOR’S NOTE: Oro has closed permanently} The strips of fried pig ears arrive in a pile, lacquered with a fermented chile sauce, set on a puddle of whipped buttermilk alongside filaments of celtuce—a cultivar of lettuce grown for its thick, celery-like stem. Executive chef Jason Fox will tell you the dish is a twist on buffalo wings, but it tastes more like a brilliant reinvention of General Tso’s chicken, in all its sticky-sweet glory. An order of these also primes you for Oro’s second-best thing: the amaro cart, which comes wheeling to your table, offering digestive relief in many bitter forms. 8 Mint Plaza 415-974-1212 orosf.com