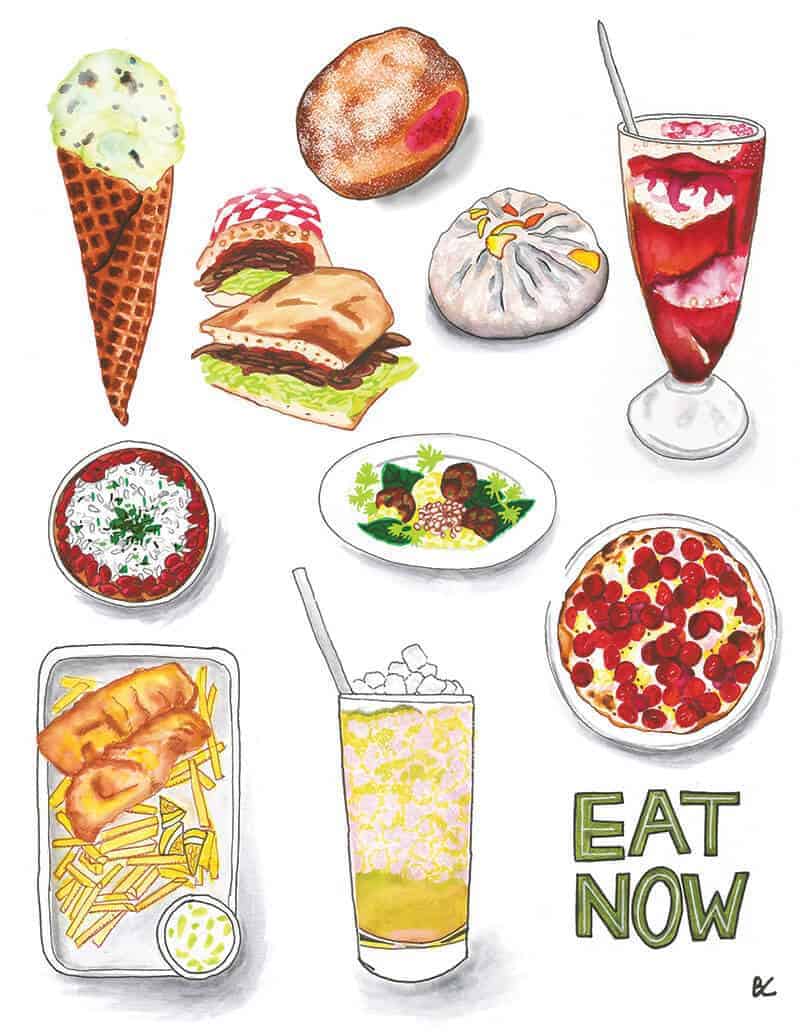 Jessica Battilana’s list of 10 things to eat (and drink) this summer! Including the Pepperoni Pizza at Pythagoras Pizza, King-Dum at Dumpling Time, a LOLA Float at The Castro Fountain and more!

Red Beans & Rice at Alba Ray’s It’s easy to have a good time at Alba Ray’s. The breezy restaurant has a transportive quality—it feels like you could be in New Orleans—an effect amplified by the Hurricane cocktails. The food helps, too, especially the red beans and rice, a Creole classic that’s faithfully reproduced here. Peppery housemade andouille sausage gives some backbone to this humble dish of slow cooked kidney beans, which is served as a side dish at Alba Ray’s. But get two orders and you can call it dinner. Alba Ray’s 2293 Mission St. albarays.com

King-Dum at Dumpling Time It’s novel to order a soup dumpling that’s the size of a grown man’s fist. Picking it up with chopsticks to eat it in one bite is out of the question; it arrives with a short, fat straw that you plunge through the tender dough to access the (molten hot) meaty elixir within. But this supersized XLB is no mere gimmick; the pork filling is delicate, laced with scallion and ginger, and the wrapper, twisted into a perfect top knot, is miraculously tender, yet sturdy enough to contain its soupy center. Dumpling Time 11 Division St. dumplingtimesf.com

LOLA Float at The Castro Fountain “Do you want to try a cherry-cola float? I asked my 5-year-old. He shook his head no. I ordered it anyway, watching as the teenage soda jerk, wearing his paper hat, measured in housemade cola syrup, stirred in a bar spoon of acid phosphate, sunk a scoop of vanilla ice cream into the frosted glass, doused it with tart cherry syrup and topped it with some soda water. Then I watched as my kid gulped it down, I stole enough sips to confidently tell you that the LOLA—a little sweet, a little tart—is no average float. The Castro Fountain  554 Castro St. thecastrofountain.com

Pork Sandwich at RT Rotisserie The star of this pork sandwich is the pork, a skin-on piece of belly that has been cooked on the rotisserie until the crackling skin is are brittle and mahogany and the ample fat turns silky. A slather of garlicky yogurt-chipotle sauce, a heap of charred green cabbage, and a crowning handful of fried onions and you’ve got yourself one hell of a sandwich. RT Rotisserie 101 Oak St. rtrotisserie.com

Piña Spritz at Anina Pineapple rum. Banana liqueur. In the hands of a less-talented barkeep, a drink resulting from a combination of the two might be a libation that you’d soon regret drinking. But at Hayes Valley’s Anina, the Piña Spritz is balanced with lemon juice and prosecco and served tall over crushed ice; it’s an able refresher for a sunny afternoon on the bar’s big patio. Anina 482 Hayes St. aninasf.com

The Raspberry Beignet at Le Marais When is a jelly doughnut not a doughnut? When it’s made by Le Marais, a micro-chain of bakeries named for one of Paris’ coolest neighborhoods that just opened it’s third location in the Castro. Here, the plush pastry is called a beignet. But semantics aside, this is one fine pastry. The brioche dough is malty and airy, lofted with levain rather than yeast. The beignets are greaseless though fried in oil, coated in crystals of sugar and filled with just the right amount of housemade jam (flavors according to the season) which is to say not so much that it gushes out when you take a bite. Le Marais 498 Sanchez St., lemaraisbakery.com

Fish and Chips at Hook Fish Co. Put me near a beach anywhere in the world, and I immediately start craving seafood. Now, more specifically, anytime I’m at Ocean Beach I’m going to start craving the fish and chips at Hook Fish Co., a retail fish market and counter service restaurant within sight of the ocean. The battered chunks of local, sustainable fish (cod or halibut, on the days I’ve visited) have a malty tang from the addition of beer to the batter, which cloaks the pristine fish like a lacy shroud. That batter stays crisp beyond all expectation, as bite after bite, dipped in an herb-heavy tartar sauce, disappearsHook Fish Co. 4542 Irving St. hookfishco.com

Pepperoni Pizza at Pythagoras Pizza It’s mystifying that a booming metropolis the size of San Francisco falls so short when it comes to pizza delivery. Speed is key; even the most delicious pie suffers upon sitting. Pythagoras Pizza—a new delivery-only outfit that you order using an app—understands this. So while their delivery area is extremely limited, if you live within it, you’re assured that your pepperoni pizza arrives (crushed plum tomatoes, pepperoni, mozzarella and thinly sliced shallots), the cheese will still be melted, not congealed, and the crust, pocked with char, will still be pliant and slightly crisp.  Pythagoras Pizza  getpi.co

Belgrade Salad at Duna To long for sprouted lentil croquettes is to admit, once and for all, that though I was born in New England, I’m a Californian now. Those nutty, falafel-like balls, first served by Cortney Burns and Nick Balla at the now-shuttered Bar Tartine, are now on the menu at Duna, the duo’s new fermentation-forward Eastern European restaurant (it picked up where their last pop-up, Motze, left off). Served with roasted spinach and cauliflower and generous dollops of homemade yogurt in a salad they call the Belgrade, this is the vibrant, vegetable-forward food of the future. The future tastes good. Duna 983 Valencia St.
duna.com

Mint Chocolate Chip at Garden Creamery The ice cream flavors here range from the pedestrian (cookies and cream) to the not-so (taro), many inspired by co-owner Erin Lang’s childhood in Hawaii. But the refreshing mint chocolate chip, which has the bright green flavor of fresh mint (sourced from Marin Roots), which is steeped in the custard before it’s churned. The ice cream is shot through with lots of thin shavings of Guittard dark chocolate, and it’s even better in a crunchy housemade waffle cone. Garden Creamery 3566 20th St. gardencreamery.com