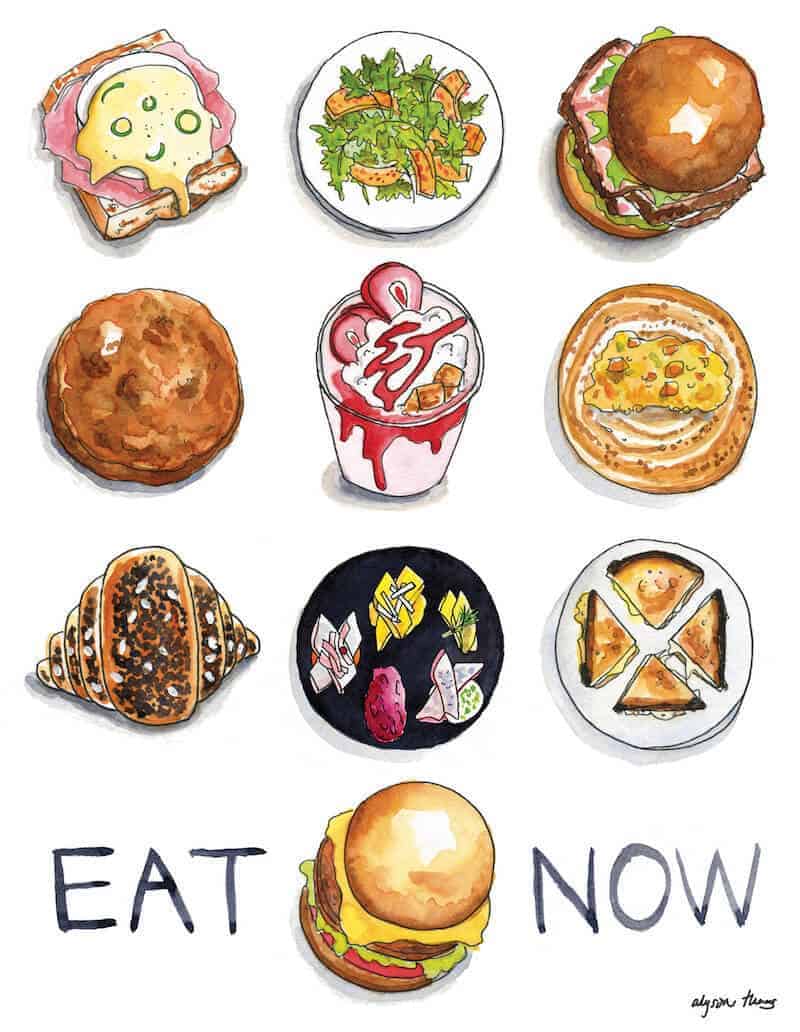 Locanda’s Eggs Benedict. If I had my way, there would be cacio e pepe–flavored potato chips, bagels and a dozen other things inspired by the Roman pasta dish—a creamy, peppery amalgam of noodles, Parmesan and Pecorino Romano cheeses and coarsely cracked black pepper. The Delfina team’s on it: at Locanda’s new weekend brunch, you can order eggs Benedict with cacio e pepe hollandaise sauce. The eggs are expertly poached, with a liquid yolk and a white that’s set, not slimy. But there could be a ball of cotton batting beneath that luxurious hollandaise cloak and I’d still gobble it up. Locanda, 557 Valencia St. 415-863-6300. locandasf.com

Nojo’s Cilantro, Bamboo Shoot and Rayu Salad. Nojo’s reboot into a ramen tavern was met by some—myself included—with derision. Not only did I like Nojo-the-izakaya, I couldn’t help but think: more ramen? The cornerstone of the new menu is paitan ramen, with an opaque broth made from long-simmered chicken bones (the best is the tan-tan spicy miso version, enriched with ground chicken and laced with toasted sesame). But the sleeper hit of the menu is a humble small plate that combines sprigs of leafy cilantro, filaments of fresh bamboo and a lashing of red chile oil. Days after we ate it, my dining companion from that evening at Nojo sent me a text: Is it weird that I’m still thinking about that salad?
Nojo, 231 Franklin St. 415-896-4587 nojosf.com.

Tartine’s Porchetta Sandwich. Sam Goinsalvos is like a debutante awaiting his ball—the former Il Buco chef moved from New York to San Francisco to become the chef at the as-yet-unopened Manufactory, the mega project from Chad Robertson and Liz Prueitt. But if you want to get an early taste of Goinsalvo’s food, grab a porchetta sandwich from Tartine’s 18th Street window, available Friday nights starting at 7:30pm. The juicy herbed pork, ringed with crackling, comes on different bread from week to week—koji brioche one week, airy flatbread the next. We can’t wait to taste what else Goinsalvos has in store. Tartine, 600 Guerrero St. 415-487-2600 tartinebakery.com.

Pastrami sausage at Wise Sons Bagelry. Bagels are the real draw, but the pastrami sausage is another compelling reason to brave the line at Wise Sons’ bagel shop. Made with ground pastrami and chicken, the patty is bound with chopped matzo balls and seasoned like a classic breakfast sausage, heavy on the sage. New Yorkers, eat your hearts out.
Wise Sons Bagelry, 1520 Fillmore St. 415-872-9046 wisesonsdeli.com/fillmore

Shakedown Ice Cream strawberry shortcake shake. A successful dessert mash-up is a beautiful thing, and the strawberry shortcake shake at this Tenderloin ice cream parlor unites two great things into one. Shakedown’s excellent vanilla ice cream forms the base of the seasonal shake, which is shot through with rivulets of strawberry sauce made, it should go without saying, from real berries. Whipped cream and bits of biscuit-y shortcake crown the dessert. Now who’s the real dairy queen?
Shakedown Ice Cream, 835 Geary St. 415-374-7523 shakedownsf.com.

The Dosa Brothers Mixed Dosa. It’s a surprise to find a great Dosa in the dismal trenches of the Financial District, hawked from a tent that’s set up on a Market Street sidewalk. The Dosa Brothers make two varieties of the South Indian rice flour crepe—one stuffed with paneer, the other filled with generously spiced potatoes—and a third that combines the two fillings. That one—the mixed dosa—is your move. Get extra coconut chutney and a cup of the superlative chai, then shore up next to the bike messengers hanging out on the steps adjacent to Montgomery BART and
wolf it down. The Dosa Brothers, 598 Market St. 415-378-098 dosabrothers.com.

Everything croissant at the Fillmore Bakeshop. It has been a while since everything spice went mainstream, moving beyond its original incarnation as a bagel topping. At Fillmore Bakeshop it’s landed atop the croissants, the blend of poppy and sesame seeds, onion, garlic and salt lending a savory top note to the sweet butter crescent. It’s an all-American spin on classic viennoiserie, as well as my new favorite breakfast. Fillmore Bakeshop, 1890 Fillmore St. 510-923-0711 fillmorebakeshop.com.

Herring five ways at Volta. Chef Staffan Terje may have made a name for himself as chef-owner of an Italian restaurant (Perbacco), but his newest restaurant, Volta, pays homage to his Swedish roots. Yes, you can get meatballs that will put IKEA’s to shame (and send you into a deep food coma), but I pledge allegiance to the herring five ways, a dish that showcases the oily fish to tremendous effect: cloaked in a mustard and dill sauce; combined with pickled beets and cucumbers; even curried. Beautiful to look at and fun to eat, it demonstrates how a talented cook can elevate the humblest of ingredients. Volta, 868 Mission St. 415-400-6200 voltasf.com.

Grilled Cheese at the Mill. Everyone who was galled about Josey Baker’s $4 toast will be happy to learn that you can get a grilled cheese sandwich on that famous bread for only six bucks. Served only on Wednesday nights, it’s everything a grilled should be: generous on the cheese and butter, expertly griddled. For another $6 you can get a bowl of soup alongside, the flavors changing weekly, from yellow split pea to roasted broccoli to that classic grilled cheese playmate, tomato.
The Mill, 736 Divisadero St. 415-345-1953 themillsf.com.

The All-American at Wesburger ‘n’ More. The craggy patty that’s the centerpiece of a Wesburger is made from ground brisket, fried hard on a cast-iron griddle until it has an almost crunchy crust. It’s good enough that it doesn’t need much embellishment: the all-American, which has special sauce, lettuce, tomato, and American cheese, all sandwiched in a plush potato-flour bun—is an exemplary burger. But Texas-born owner Wes Rowe, can’t help but embellish; the Hot Wes, for example, comes topped with queso, pickled jalapeños and onion rings. An order of the supernaturally crunchy tater tots is an ideal partner, as is a beer; if you want to go Texas-style, get a bottle of Topo Chico, a refreshing sparkling water with pinprick bubbles that’s rarely found outside the Lone Star State.
Wesburger ‘n’ More, 2240 Mission St. 415-745-9371 wesburgernmore.com