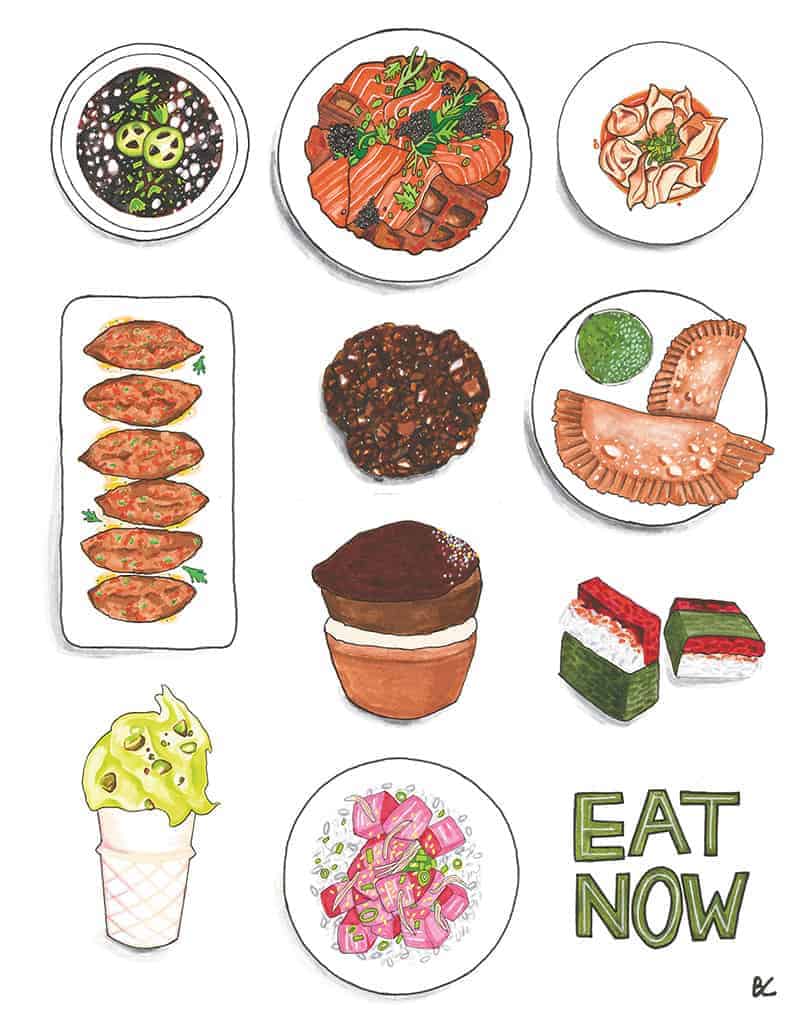 Frijoles Negros at Glena’s Michael Gaines has proved he can cook—first at Central Kitchen, then at Kin Khao and now at his solo project, Glena’s, a taco-and-margarita operation in Dogpatch. You’ll probably need little prompting to order the al pastor tacos or, should you be in hangover territory, the poached eggs and chorizo. But I want to draw your attention to the sleeper hit of the small menu: the side order of frijoles negros. I first spooned up a bowl of these at a Glena’s test dinner more than a year ago, and they were memorable enough that they’re what drew me to the restaurant when it finally opened earlier this spring. Creamy, rich and comforting Rancho Gordo beans are taken to great heights. And if you think that’s a lot of praise to heap on a humble foodstuff? Well, you haven’t had these beans. Glena’s: 632 20th St. glenassf.com.

Tater Tot Waffle at The Riddler The point at The Riddler is not the tater tot waffle, it’s the Champagne, dummy—chosen from a list of over 100 bottles, many vintage and hard to find. But after you’ve had those first few effervescent, tonifying sips, your eye is going to wander back to that waffle. You’re going to order it, this waffle made from tots pressed in an iron, then topped with either prosciutto and arugula or smoked salmon and caviar, and you’re going to be mad you didn’t think of the idea first. The Riddler: 528 Laguna St. theriddlersf.com.

Sichuan “Working Hands” Dumplings at China Live China Live is weird and beautiful. After walking block after Chinatown block, passing dozens of stores where you can get a stack of tea towels for $3 and restaurants where $5 will buy you a pile of dumplings, there’s a feeling of cognitive dissonance when you open the door to CL and find yourself in a beautifully designed oasis, where a single tea towel from the marketplace costs $14 and a small bowl containing four or five “working hands” dumplings sets you back $9. Figuring out what to order from the giant menu is a serious task, but a meal should certainly include those dumplings. The gossamer wontons are filled with a small amount of meat; the generous silken wrappers look like silk sheets in a bowl. But it’s the flavor of the broth, thrumming with numbing Szechuan peppercorns and hot chiles, that will linger long after your final sip. China Live: 644 Broadway chinalivesf.com.

Pasteis de Bacalhau at Uma Casa There are many delicious things to eat at Telmo Faria’s Portuguese restaurant in Noe Valley: complimentary bowls of potato chips that make their way to the table as you peruse the menu, shrimp bathed in garlicky oil, velveteen bowls of caldo verde. But a quick glance around the bright tiled dining room and you’ll see that nearly every table has an order of the fried salt cod beignets. These poofs of potato and bacalhau (a beloved Portuguese ingredient) are greaseless and light, the fritter of your dreams. Uma Casa: 1550 Church St.umacasarestaurant.com.

Seven Treasures Cookie from Manresa Bread There are a dozen ingredients in this oversize crunchy-chewy cookie, but Manresa Bread partner and head baker Avery Ruzicka considers seven of them, including freshly milled Skagit whole-wheat flour, chocolate chunks, dried cherries, coconut, cocoa nibs, walnuts and oats, to be the “treasures” that make this ordinary-looking cookie so tremendous. It’s so dense with goodies that it’s almost like a power bar. Yes! That’s it! It’s a power bar. Go ahead, have another. Sold at Verve Coffee, 2101 Market St. vervecoffeesf.com.

Beef Empanadas at Media Noche Years ago, when I was young and free, I spent a couple of weeks in Costa Rica with friends. After a day at the beach, salty and hungry, we ended up at a bar where we downed a lot of cans of Imperial and a lot of orders of fried empanadas, the pastry bubbled and crisp, contrasting with the soft spiced-beef filling. The picadillo empanadas at Media Noche taste a lot like those Costa Rican ones, and eating an order of them, swiped through the so-called “famous green sauce,” reminded me—almost painfully, if I’m being honest—of those easy, good days. Media Noche: 3464 19th St. medianochesf.com.

Pistachio Gelato at Coletta Gelato When I learned that the owners of Coletta had attended gelato school in Bologna, Italy, my first thought was: gelato school? And my second: career change? Unlike other spots in town, Coletta makes it’s gelato base in-house using organic milk from Clover, then blends it into sweet, creamy velvet. If it’s available, get the pistachio, made with California-grown nuts. Coletta Gelato: 685 Harrison St. colettagelato.com.

Chicken & Mushroom Musubi at Almanac Brewing Co. Yeah, you can get a burger, and a towering, eat-with-two-hands fried chicken sandwich, like you might expect to find at any taproom the country over. But there are plenty of surprises on the Almanac menu, including the chicken and mushroom musubi. In place of Spam, a rectangle of chicken-and-shiitake mushroom pâté (cooked, cooled, sliced, then seared on the flat top) sits on top of a disk of Kokuho Rose heirloom sushi rice, glued together with a sweet-savory dab of black trumpet mushroom jam and belted with a length of nori. It’s a nice snack to eat with a beer, or two, and a nice departure from typical brewhouse fare. Almanac Brewing Co. 2704 24th St. almanacbeer.com.

Ahi Poke Bowl at and Limu & Shoyu I’m embarrassed to write it: Reader, I bought (and enjoyed) my first poke bowl. I’d remained agnostic in the face of this trend, scoffing at the opening of dozens of poke joints in a very short time. And then one day, looking for something savory and reasonably healthy to eat before I stuffed my face at b. patisserie next door, I darkened the door of Limu & Shoyu. As at all poke outfits, you can customize your bowl here, but when faced with analysis paralysis I opted for the Ahi: two generous scoops of rice topped with big-eye tuna and the works (onions, scallions, limu seaweed, kukui nuts, sesame seeds and the mayonnaise-heavy poke sauce). If you want to feel better about hopping on the bandwagon, consider that L&S uses only sustainable seafood in their poke. Limu & Shoyu: 2815 California St. limuandshoyu.com