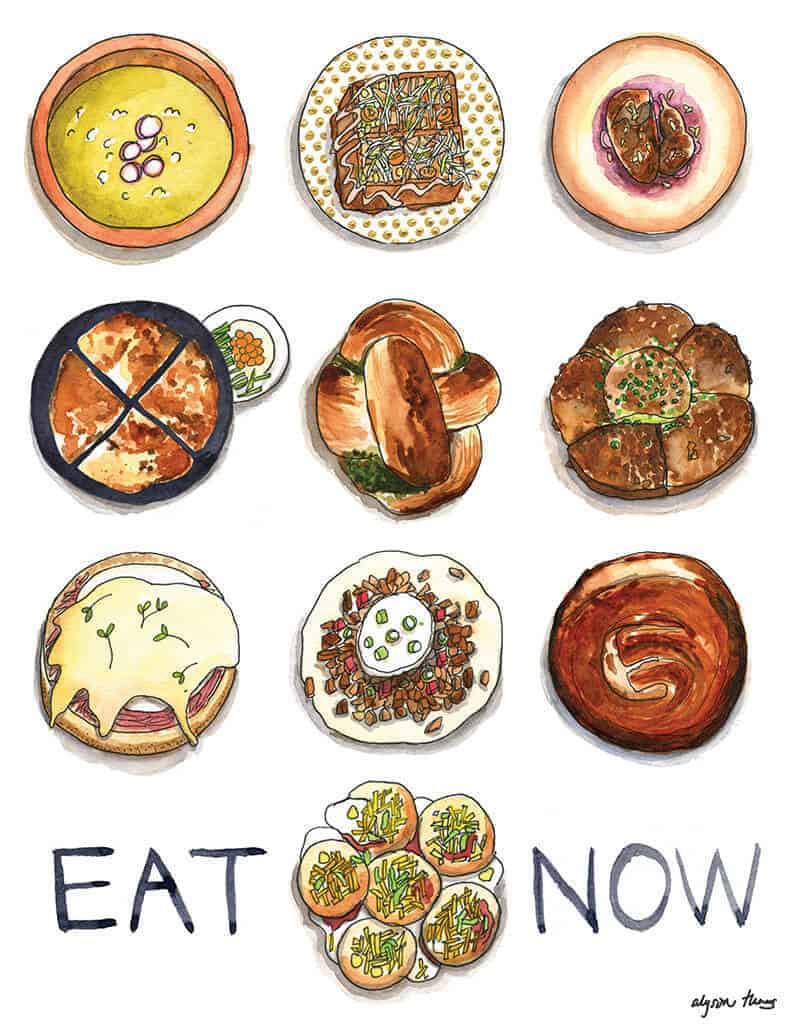 Anna Roth pinch-hits for Jessica Battilana in this installment of 10 Things to Eat Now and she leads off with the Pozole at El Buen Comer, Okonomiyaki Waffle at Louie’s Gen-Gen Room and the Allspice Chicken at Tawla.

Pozole at El Buen Comer There’s a lot to love about the soulful cooking that’s coming out of Mexico City–born chef Isabel Caudillo’s kitchen. But as much as I enjoy her moles and chilaquiles, the green pozole is the dish I dream about. Its head-clearing broth has a slow burn that’s punctuated by a hearty squeeze of lime, and the shredded chicken and tender hominy hunks that come floating in the broth offer plenty of sustenance.
El Buen Comer
3435 Mission St.
415.817.1542
elbuencomersf.com

Okonomiyaki Waffle at Louie’s Gen-Gen Room At the new reservations-only basement bar in the still-white-hot Liholiho Yacht Club, you drink tiki-influenced beverages and eat waffles. There are several Belgian-style waffles to choose from, from the savory (bone marrow butter, burrata and ham) to the sweet (coffee milk caramel). To really get a taste of chef Ravi Kapur’s Hawaiian cuisine, order the okonomiyaki variety, which bakes housemade spam into the batter and tops the whole thing with pork-infused mayo, fresh corn and a shower of shredded cabbage. Louie’s Gen-Gen Room
871 Sutter St.
415.440.5446
liholihoyachtclub.com/gengen

Allspice Chicken at Tawla Musakhan, or sumac chicken, is a basic recipe with Palestinian origins but it can be found throughout the Middle East. One of the best versions in SF can now be found at Tawla, the Mission’s new Eastern Mediterranean restaurant. A quarter chicken comes with skin burnished nearly black from an all-spice coating, and luxuriating in a pool of sumac-tinged sauce perfect for sopping up with the restaurant’s fluffy rounds of fresh bread.
Tawla
206 Valencia St.
415.814.2704
tawlasf.com

Sourdough Scallion Pancake with Salmon Roe at Mister Jiu’s Bar You can get a three-or-more-course meal in the dining room starting at $45, but for a lesser commitment, the bar menu at Mister Jiu’s offers many excellent snacks. Others may sing the praises of the prawn toast; I’m partial to the green onion pancake, which is as flaky and buttery as the best dim sum versions but with a signature sourdough tang, and beautifully accentuated with a salty salmon roe dip.
Mister Jiu’s
28 Waverly Pl.
415.857.9688
misterjius.com

Arugula and Hazelnut Danish at Tartine Manufactory One of the most exciting things about the massive new 18th Street project from bakers extraordinaire Chad Robertson and Liz Prueitt is the chance to try a whole new range of Tartine pastries. Don’t miss the arugula and hazelnut danish, which tames the leafy greens’ sharpness in a pastry that resembles a more soulful take on spanakopita.
Tartine Manufactory
595 Alabama St.
415.487.2600
tartinemanufactory.com

Monkey Bread at Corridor You might have encountered monkey bread as a sweet, sticky breakfast bread, but at this mid-Market spot from the team behind Trestle, it’s made savory with cheddar cheese, chive oil and basil aioli. Order one for the table while you decide what else to get from the seasonal comfort food–heavy menu.
Corridor
100 Van Ness Ave.
415.834.5684
corridorsf.com

Eggs Benedict at Old Bus Tavern The Bernal Heights tavern has a new chef, new menu and a new brunch service. Its superlative benedict starts with a base of housemade English muffins, with plenty of nooks and crannies for the brown butter hollandaise to find its way into. You can get it topped with veggies, but it’s better with pulled pork, and a Bloody Maria made with green gazpacho on the side. Just don’t expect to do anything for the rest of the day.
Old Bus Tavern
3193 Mission St.
415.843.1938
oldbustavern.com

Kouign Amann at Arsicault Bakery This Inner Richmond bakery has been attracting multihour lines ever since it was named the Best New Bakery in America by Bon Appétit magazine in August. That nod was based on the strength of the croissants, but don’t sleep on the kouign amann. Baker Armando Lacayo’s traditional version is flatter than most, with plenty of surface area for caramelization.
Arsicault Bakery
397 Arguello Blvd.
415.750.9460

Dahi Puri Chaat at Dum The popular food truck has a new brick-and-mortar on the Mission’s 24th Street, where they’re serving the truck’s famous biryanis plus other Indian specialties. In this chaat, semolina puffs are stuffed with a cooling sweet yogurt sauce, alfalfa sprouts, and tamarind and cilantro chutneys, then topped with fried vermicelli noodles for a lovely textural contrast.
Dum
3111 24th St.
415.874.9019
dumsf.com