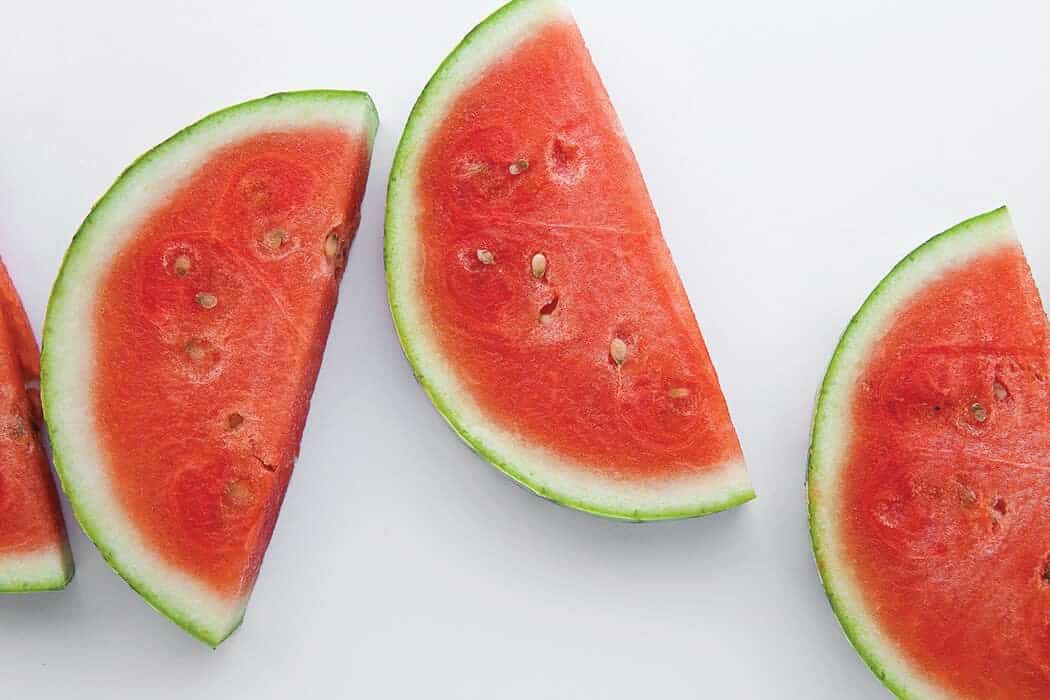 Few fruits embody the essence of summer like the humble watermelon. Sweet, juicy and refreshing, the watermelon is also a nutritional powerhouse filled with cancer-fighting vitamins and antioxidants.

WHAT IS IT?  Originally from South Africa, the watermelon thrives in warm climates with its season peaking near the end of summer, which in San Francisco is usually August through September. Though technically a berry, the hard outer rind of watermelon and similar fruits makes them part of a unique class called pepo. Though most of us think of watermelon as a fruit, the rinds can be served savory as a vegetable. In China watermelon rind is stir-fried or stewed, and pickled watermelon rind is a favorite among the Southern states. Despite being 90% water, watermelon flesh is usually very sweet and fragrant. There are more than 1,200 varieties of watermelon that vary in size and shape from very small, round fruits to enormous oblong beasts weighing up to 200 pounds. Watermelon flesh is typically red, but can also be pink, orange, yellow, creamy white or pale green (when unripe). The rinds can also range substantially in color and pattern, with some so dark green they look almost black without stripes, while others have brightly contrasting stripes with distinctive patterns. Others are very pale green with even lighter stripes. The Golden Midget heirloom watermelon has a bright yellow rind with deep red flesh when ripe.

HEALTH BENEFITS  Like most fruits, watermelon is a rich in vitamin C. It is also an excellent source of vitamin A, as well as a powerful antioxidant called lycopene that is responsible for the red pigment (lycopene is also abundant in tomatoes and strawberries). Foods rich in lycopene have been associated with lower cancer rates, and watermelon in particular has been linked to decreased risk of prostate and breast cancers. Watermelon has also been tied to decreased blood pressure and has anti-inflammatory properties. Lastly, watermelons have one of the lowest glycemic loads of any fruit, making them a good choice for those with metabolic disorders.

SOURCING IT  From August through the end of September watermelon should be fairly easy to find in grocery stores around the city. If you’re looking for some of the more interesting heirloom varieties, head to the farmers market. Lucero Organic farms have some of the most flavorful melons, but also ask at The Peach Farm, Eatwell and Catalán Family farms at the Ferry Plaza Farmers Market. Bi-Rite Marketcan get some interesting varietals as well. Picking a great watermelon remains a bit of an art, but a good rule of thumb is to look for a high weight-to-size ratio. Hearing a hollow sound from knocking on the melon can also be a good indication that the melon is ripe. Lastly, check for a pale yellow patch indicating that the melon was ripened in the field. If the patch is still pale green it may not have stayed on the vine long enough.

AT HOME  Watermelon is easy to store, and will sit happily on the counter or in the refrigerator for up to two weeks. Interestingly, lycopene content of a harvested watermelon will actually continue to increase. Compared to fresh fruit, the lycopene content of a watermelon stored at room temperature for two weeks is 11%-40% higher, with a 50%-139% increase in beta-carotene. Storing watermelon in the refrigerator, however, prevents additional carotenoid biosynthesis. It’s really hard to mess up a good watermelon. Raw, they are perfect. A squeeze of lime is a great addition as well, particularly if your melon is less sweet than you hoped. To mix it up, throw a few slices of watermelon on the grill during your next barbecue, or mash a few cubes in your next batch of mojitos.

EATING OUT  One of my favorite surprise watermelon treats is at Nopa in late summer, when they sometimes pair grilled watermelon with fresh cheese and their famous rotisserie chicken. Also look for watermelon in seasonal salads, desserts and cocktails. And if you just can’t get enough, head to 21st Amendment for their signature Hell or High Watermelon Wheat beer.