The Signal Things of San Francisco: Irish Coffee, Then and Now 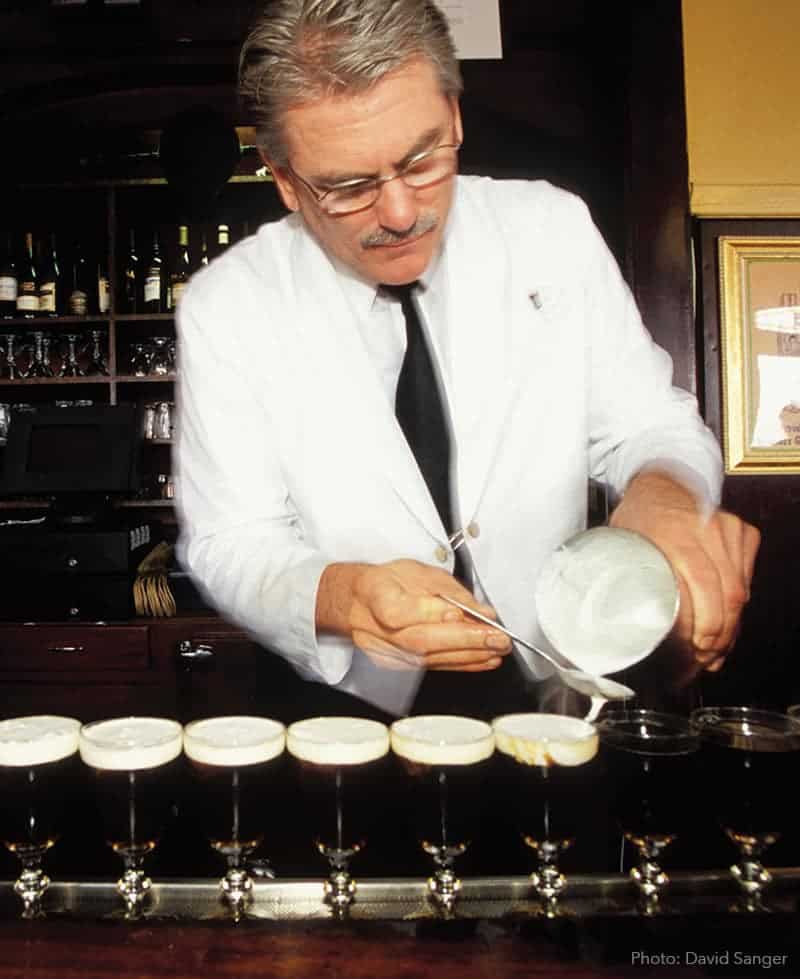 That summer of 1952 was even more wintry than usual in San Francisco. The fogs of August dripped. De facto summer returned like it always did in September and October, but as November broke, the chill returned. Daytime highs settled in the 40s, and through the windows of the Buena Vista Café, veiled on the inside with cigarette smoke, the view out to Beach and Hyde must have been bleak. The Cannery was a bulky brick warehouse so little used it might as well have been abandoned, and the bay, visible across Aquatic Park, would have seemed a thick gray smudge.

On the chilly night of November 10, a journalist with a thick glasses, a weasel’s face and a Pulitzer Prize (also a San Francisco Chronicle travel columnist) did something that would make the Buena Vista into something greater than merely an old-fashioned saloon on a dead corner. That night, Stanton Delaplane nailed down the recipe for Irish coffee.

Maybe Irish coffee is a dubious hook to hang with glory, but the drink came with a story. It said Irish coffee was invented in Foynes, a port for transatlantic seaplanes in the west of Ireland, on the Shannon estuary. Starting in 1937, Pan-Am and BOAC planes made 12 and 15-hour flights from Foynes to Labrador and Newfoundland in Canada, a leg in the journey from London to New York. The Atlantic crossing in the prop-driven planes called flying boats would have been cold, damp, and probably miserable. By 1942, in the terminal’s restaurant, layover passengers could take comfort with a simple drink: sugared coffee doctored with whiskey, floating a thick cushion of slightly aerated cream—Irish coffee.

Boozy coffee is an apt restorative after travel laced with tedium, anxiety, and blasts of recirculated cabin air: a little something to stiffen the mind; a little something else to relax the muscles in your neck and shoulders. Liquor, in a way, is coffee’s corrective, a thing that mellows the harsh. Italians spike espresso with grappa or sambuca and call it caffe corretto, “corrected” coffee. In Spain they call it carajillo, coffee with brandy, rum, or anisette. At a little neighborhood bar in Valencia, I once watched guys who looked like truck drivers downing cups of this before work, both fortification and cushion for another ordinary day of struggle. Apart from whiskey, the distinguishing part of Irish coffee is the layer of cream, an evocation of pasture in a place of roaring engines.

The seaplane port at Foynes closed in 1945, after the opening of the Rineanna airfield (eventually renamed Shannon) on the northern side of the estuary. Irish coffee migrated along with the planes. So did Joe Sheridan, the chef at Foynes, a man with a patchy Errol Flynn mustache and dark hair greased back from a high forehead. This is where Delaplane enters in 1951, a traveler with a layover at Rineanna. Back in San Francisco, at the Buena Vista—one of his newsman haunts—Delaplane tried to talk the owner, Jack Koeppler, through Irish coffee. They failed to get the cream to float. Delaplane and Koeppler wrote to Sheridan. Still they struggled.

Struggle is the pivot on which most food creation stories teeter. Still, it seems unlikely that a thing as simple as Irish coffee could mystify even a moderately competent bartender, but that’s how Delaplane’s story went down. Koeppler himself is said to have gone to Ireland to learn how to make the drink. That same year, Sheridan immigrated to San Francisco. By 1952, he was the Buena Vista’s chef.

And so, on that cold November night at Beach and Hyde, Sheridan, Delaplane, and Koeppler set up San Francisco’s first proper Irish coffees. It’s hard to understand the excitement for something so slight, but Irishness had cultural sway six decades ago. San Francisco had a significant population of second and third-generation Irish Americans in 1952, the year Republic Pictures released John Ford’s The Quiet Man, starring John Wayne as an American boxer yielding to the ancestral pull of County Mayo, a place of potent green nostalgia. There was a collective yearning to reclaim Ireland as a land of gentle charm and roguish boozing. Add the influence of Delaplane’s column, in a city dominated by dailies, and his tale of Irish coffee as an epic of long treks through freezing outposts via the glamorous and expensive medium of flight, and the Buena Vista was instantly mobbed. 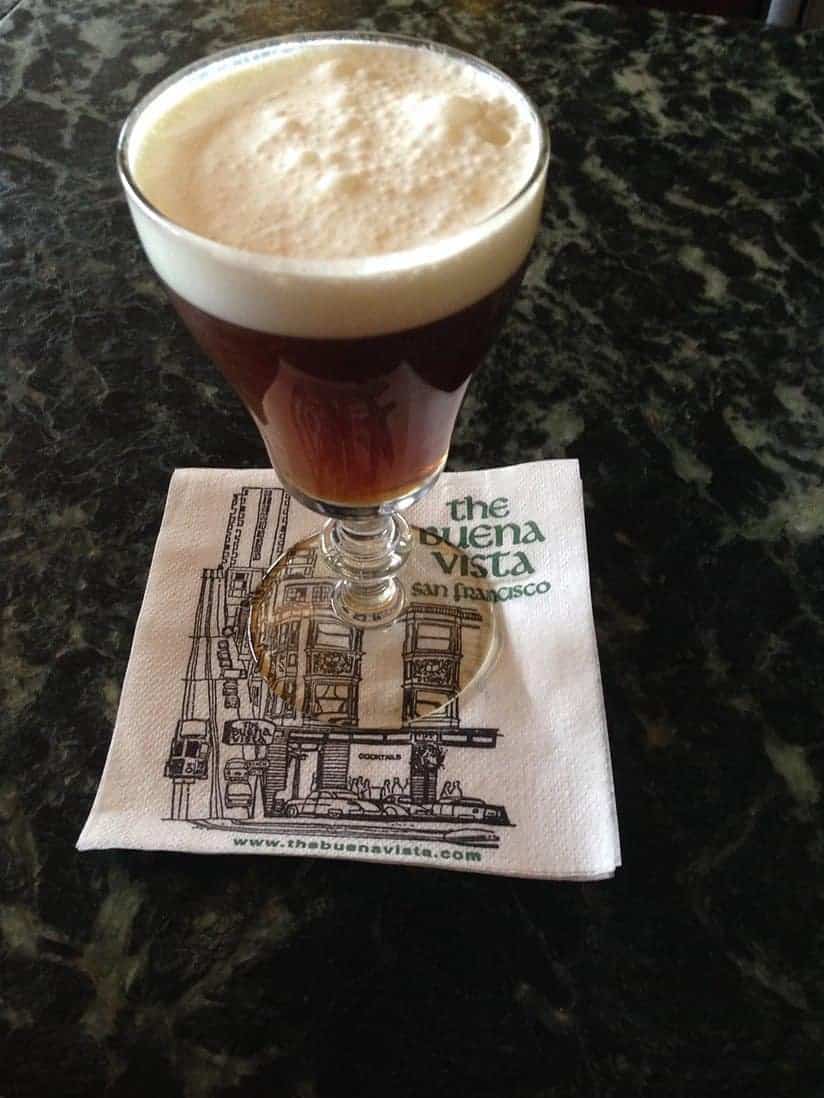 I’m standing at the door of a warehouse South of Market. There’s a poster for a drag queen party on the wall, a straggler from last Sunday’s Folsom Street Fair, a thing as inconceivable in 1952 as the iPhone. I’m here to see Nick Cho, co-owner of Wrecking Ball Coffee Roasters with Trish Rothgeb (she coined the term “third-wave coffee”; Cho is her husband).

They have a café on Union Street, but Cho’s leading me into the office, a garagelike space with a Probat roaster and a stainless steel table for cupping. I’ve asked Cho to help me reconfigure Irish coffee for a San Francisco of microroasteries and craft cocktails, where only an echo of Irishness still sounds.

Cho has invited a friend, Christopher Owens, visiting from Los Angeles. Owens founded Handsome Coffee Roasters (Blue Bottle acquired it in 2014) and made drinks at The Varnish, the serious cocktail bar in downtown L.A. I figure if any duo has the taste and the skills to update Irish coffee, it’s these guys. I’ve been here only a few minutes, pulling a brand-new boxed-up bottle of 12-year Redbreast Irish whiskey out of my backpack, and Owens is already saying how coffee and cocktails have this symbiotic connection to craft.

“I like everything with a crafter process,” he says. “It appeals to my nerd brain.”

Cho says he never really thought about Irish coffee until now, after I asked for help. Even before we taste, he’s reducing Irish coffee to sensory gestures. “There’s the aromatic element with both the whiskey and the coffee,” he says, grinding a handful of Ethiopia Sidama beans. “The cream dampers that, but then you gotta have the cream. You kind of endure the cream, get that out of that way, and then you have this aroma bomb.”

I wonder if anyone at the Buena Vista ever thought in terms of the aroma bomb. The drink’s foundation there is Tullamore Dew, a blended whiskey, lots of wood, heat, and peppery spice. The coffee is strictly first wave, free of fragrance or depth, a hot medium for dissolving sugar. The cream is cool and neutral, all texture. Well, it was a different time, when bars smelled like cigarettes and damp wool coats, and people drank blended spirits, heavily diluted.

Owens says what he thinks the correct coffee for Irish coffee should be: sweet rather than super acidic or flowery, a balancing of the heaviness of the cream and the whiskey and the sugar.

After a couple of tries we have it: one and a half ounces of good, aged Irish whiskey; three ounces of a relatively sweet, structured coffee with a medium or medium-light roast profile, brewed with 60 percent of the usual water; a teaspoon of light brown sugar, and a half-inch cap of good cream (we used Straus organic), very lightly whipped, still fluid (see the recipe).

It’s pretty astonishing: clean, grassy smell of cream, the surprising coldness on your lip. Then the concentrated fragrance of coffee with a weak little brown-sugar shadow, and the sweet, volatilized grain scent of whiskey. Before we started I feared the coffee would eclipse the booze, but in fact they enhance each other.

“When we talk about food and drink there’s this lost art of the transformation into a beautiful new product,” Cho says, and I’m totally with him. It makes me think that for an earlier generation—that miserably cold November of 1952—you needed a far-ranging story about discovery and re-creation to capture people’s imaginations, evoke this sense of shared warmth. In the San Francisco of 2016, we have this alchemical notion of perfect ingredients we bend minutely, using small gestures, against an arc of thoughtfulness. I bet it gives us just as much comfort.

Irish Coffee, Then and Now was published in the Fall 2016 issue © 2016 Edible San Francisco.