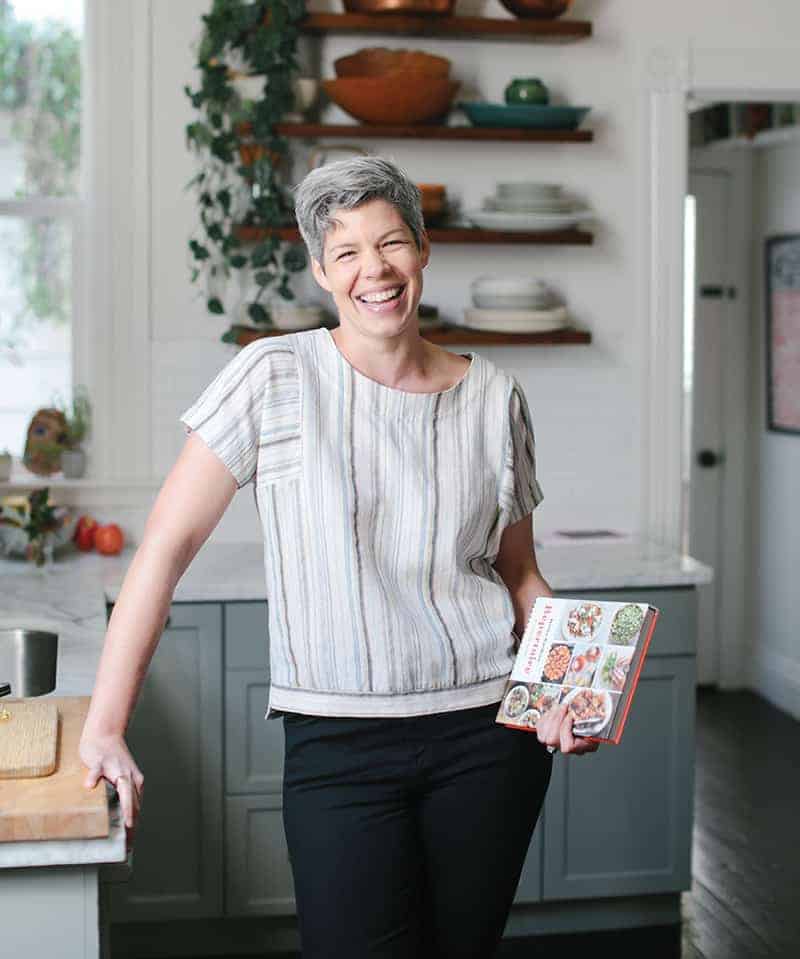 In the intro to Sam’s Spring Fattoush Salad, a recipe in her new book Repertoire, Jessica Battilana serves a riddle. She recalls the time, soon after her wife has given birth to their first child, when exhaustion has frayed Battilana’s edges. One day she runs into Sam Mogannam of Bi-Rite Market, who offers a single word of parenting advice. “He grabbed my hand,” Battilana writes, “looked straight into my eyes, and said simply, ‘Surrender.’”

The fattoush that Mogannam inspired is only recipe number two in Battilana’s book of 75. The meaning of his advice (surrender) shades the rest of Repertoire like a koan, a paradox to roll around the mind as you flip through recipes for duck rillettes and rustic seafood stew and tarte tatin: lovely, conquerable dishes all, the well-worn index cards in Battilana’s Rolodex of go-tos. How could they be expressions of surrender? Especially since Battilana is clear from its opening pages that Repertoire is an extended prompt for getting a grip on everyday cooking, when making dinner has to compete with half a dozen other daily imperatives, each demanding attention like a series of all-caps texts popping up on your phone screen.

“In the old days,” she writes in the first chapter, “before the kids, I might have leisurely pulled a cookbook from the shelf, browsed through for inspiration, and hit the store for ingredients.… But it’s different now. Kids, work, life…I just don’t have the time I used to spend dreaming up dinner. No one does.… Friends who’d had children before me promised a future of takeout and cereal for dinner. But I’m stubborn. Instead of giving up on cooking at home, I doubled down on it. I discovered the trick…was to develop and cook from my own repertoire, my set of durable, flexible recipes that now form the backbone of my cooking life.”

Repertoire is about pushing against the temptation of going out or ordering in. It’s a book that might as easily have been called (with or without a hashtag) Resist.

I think about this as I pay Battilana a visit at her tidy flat on a quiet street in the Lower Haight. It’s a nonschool day; her oldest, Ellis (he’s six), has set up a wooden train set in the living room with his brother, four-year-old Sidney. It’s that time in late afternoon when the day spent rooting for things in cupboards and making lunch and cleaning up and answering questions and suggesting things to do and saying no is reaching a critical point. I sense Battilana’s patience sagging like a clothesline overloaded with wet laundry, the dangling towel edges and sheet hems just short of touching the ground. She sets up a new batch of coffee in the maker and seats herself opposite at the kitchen table. I wonder: How can she have so much poise?

She talks about her work as co-author on a string of cookbooks polished to a shine: Vietnamese Home Cooking with Charles Phan; Tartine Book 3 with Chad Robertson; Home Cooked with Anya Fernald; Homegrown with Matt Jennings; Sausage Makingwith Ryan Farr. Each has a clear-cut point of view; each probably requires a trip to at least one store beyond your regular circuit. For her first comprehensive solo book, Battilana felt the usual pressure to come up with a hook, a sort of gimmick to tie the recipes together. But something about that felt dishonest, or like she was trying too hard. She didn’t want to go the route of making things difficult to make them feel important.

Stirring milk into her cup of coffee, pausing to ask if I’m sure I don’t want a cup (the reflex of someone used to taking care of others), Battilana says, “I remember once asking my mom, ‘What should I write about?’ and she gave me the advice everybody gives: ‘Write what you know.’ Battilana says what she knows is how to write real recipes for real life that really work—a slogan that sounds genuine in her kitchen, imagining the pressure of coming up with meal after meal for kids who, judging from the clattering down the hall, have lost interest in the wooden train. “I didn’t feel I had to put anything on,” she says.

It’s then, when Sidney comes into the kitchen dragging a bed pillow on the floor (“Sid, I’d appreciate it if you put my pillow back on the bed and not walk on it, please”) and Ellis wants a snack (he mentions the energy bar he knows is in Battilana’s bag), that the idea of surrender starts to resonate like empowerment, not giving in. Repertoire begins to sound like an elegant French name for acceptance with style of the truth of your life. You might be reduced, by kids and nonschool days and a wife stuck in traffic, to foraging from the pantry and the fridge drawers, but holy shit, you will pull off the best, least apologetic bucatini all’amatriciana you have ever made. Surrender.