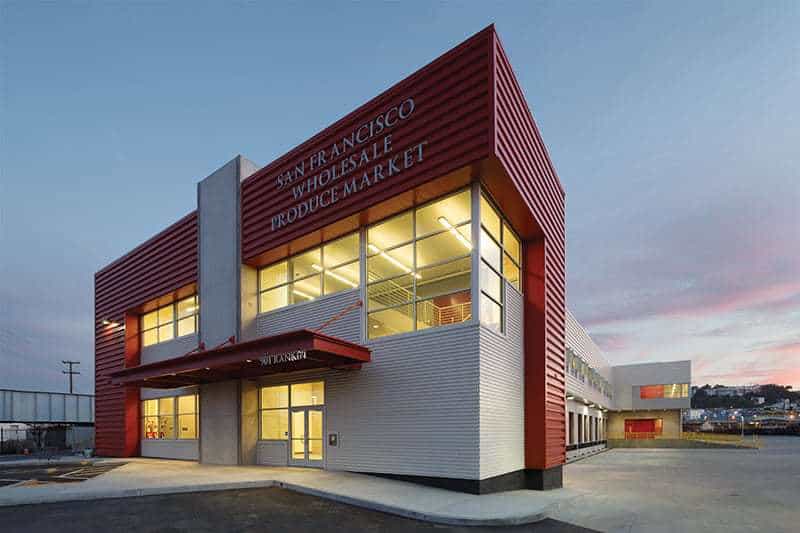 It’s 3 a.m. on a Wednesday at San Francisco Wholesale Produce Market (SFPM) and I’m pretty sure I’ve walked onto an old MGM movie set. Crates of satsumas, lettuce, tomatoes and bitter melons are hoisted onto loading docks while voices shout order numbers back and forth during the cold predawn hours in a synchrony resembling music.

The warehouses echo the voices and also echo San Francisco history. Since the 1920s, this has been the world behind how we get what we eat. By the end of the day at 11 a.m., more than 800 employees will have finished moving hundreds of tons of produce around the Bay Area.

Spread over 25 acres in the Bayview–Hunters Point commercial district, the produce market is under highways 280 and 101 in a maze of roads and parking lots. This has been SFPM’s location since 1963, when it relocated from the Embarcadero due to congestion and competition for space. Those pressures haven’t changed which is why the decision in 2013 to renew the SFPM’s lease under San Francisco’s Mayor Newsom and then Lee for 60 years was so important.

Equally important is SFPM’s $96 million reinvestment plan to be implemented over the next 20 years using the profit from their rent and any grants they can acquire. As old school as the market is in some ways, constant adaptation is a given. Since its early days in the 1920s Colombo Market, the merchants and market have had to respond to consumers, farmers, shippers and the city itself.

I walked around the market with SFPM program manager Janna Cordeiro as it was starting to wind down at 9 a.m., with massive developments visible all around, reminders of the real estate boom. “We realize we have this potential leverage of scale and platform and it’s time to define who we are and where we are so we can grow with our merchants and the times,” says Cordeiro as she greets each worker with a smile. Greenleaf and Whole Foods were previous merchants and both outgrew what SFPM could provide in space and technology. Larry Brucia, an SFPM board member and, in his words, the “accidental inventor of trail mix,” says it’s always been the role of the Market Corporation to be a nest for many businesses. Most of the merchants in the market are small to midsize.

I spoke with Stanley Corriea, Jr. who runs Stanley Produce, a merchant with the market since 1963. “We’ve had to adapt since the beginning, although now it’s much more consumer-driven. We have to specialize and answer to what they want. It’s good old-fashioned capitalism with a highly perishable product thrown in to complicate things. It’s always interesting. When we first started, we had to import endives from Belgium and radicchio from Italy. Now we can get it from farmer friends in California. We just started distributing dairy and eggs. If you don’t adapt, you’re out.”

Another example of provider adaptation is Good Eggs, a grocery delivery service—something unheard of 20 years ago. With the internet, specialized orders are feasible in a wholesale market and Good Eggs is rapidly expanding. Michael Janis, the general manager of SFPM, holds the same opinion as every merchant and worker I spoke with: SFPM is a unique enclave of friendly competition and support between businesses. Merchants buy and sell from one another when they could instead view each other as mere competitors.

In 2015, the Market Corporation reorganized to become a nonprofit, making it one of the few terminal markets to hold this status. Last year, the market secured its first grant from the city’s Department of the Environment to fund a zero-waste policy. SFPM recently hired Carolyn Lasar as a surplus manager acting as liaison between charities and nonprofits to deliver produce, and it has already distributed 750,000 pounds of produce to those in need. When I met Lasar, she was coordinating a delivery of buttermilk to City of Dreams, a nonprofit empowering underserved youth.

James Sarria, manager of City of Dreams, was in another part of the market picking up produce excess and he expressed how helpful it was that the market and the merchants invested in donating 20% of their potential food waste to nonprofits within a close radius. And as far as I could see, every crate that was being donated was filled with perfect produce, like gorgeous butter lettuce and squash.

“We want to be able to provide more than just the carbs Safeway gives away. Bread is great, but everyone deserves to eat healthy,” says Sarria. Cordeiro agrees: “One of our biggest goals is to invest and give to those immediately surrounding the market. We want to become an engine of education and employment for the neighborhood, which is part of the reason we changed to a nonprofit status.”

The market also gives produce to Heat of the Kitchen, a culinary arts program at Ida B. Wells High School, and Cordeiro believes there’s more opportunity to use SFPM’s established function as a way to help the community. Another part of the zero-waste program is the plastics recycling effort, and there are bins all over the market with strips of plastic binding spilling out like the entrails of trade. There’s an efficiency here that defies the industrial scale of the market and it shows the health of
its ecology.

One of the trickier jobs of the Market Corporation is to act as an organizer and facilitator of the different merchants and also remain relatively hands-off without being de facto landlords. The reinvestment program aims to provide more opportunities for the merchants and the corporation by redirecting traffic to create a safer environment and building better warehouses. Both are sorely needed. A local grocer and SF icon, Gus Vardakastanis, was killed in a hit-and-run at the market in September; the streets running through the area are notoriously dangerous. Stanley Corriea is enthused about the road changes and also the vertical vision of the market. Most of the warehouses are at ground level, and the sprawl of the market means that the real estate taken up has the potential of being worth more than the business can generate.

However, San Francisco does still remember that institutions like SFPM and SF Flower Market are not simply about the highest bidder. San Francisco’s 60-year lease is a futures investment in building up instead of out. The newest building, a LEED Gold–certified 82,000-square-foot two-story facility at 901 Rankin, holds Good Eggs and Mollie’s Markets, both of which have had consistent growth in the last five years. Every business at the market has enjoyed steady growth, which means more jobs and more access to fresh food. From the market’s only farmer merchant, S&L Produce, to Mollie Stone’s Markets, to Arcadios, everyone takes part in the overall economy of the market as a center of bustling commerce and blue-collar jobs. Some merchants are distributors to various restaurants and institutions while others are wholesale produce sellers. SFPM is looking to diversify to some degree with it’s new plan. Janis intends to set aside 10,000 square feet for a value-added “makers market,” where existing merchants or new businesses can use the produce to make things like pickles or canned tomato sauce.

In 2018, SFPM will release a new logo and tagline to help increase recognizability and establish a better sense of connection with San Francisco’s businesses and individuals. While it’s not an advertised, service, the merchants do sell their produce at a one-crate minimum to individuals. Again, every level of production and consumption is considered, and when one thinks about the challenges facing both farmer and consumer, it’s a blessing to have a middleman that takes its position with gravitas and care.