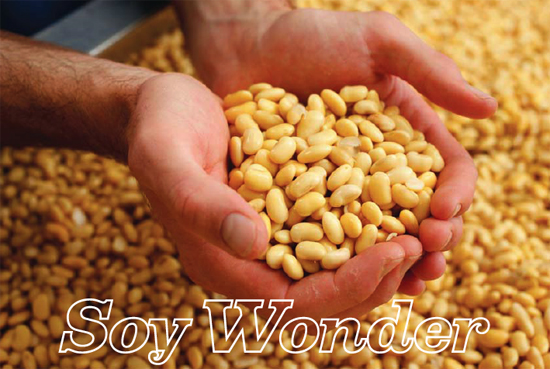 Full disclosure: When I first saw the Hodo Soy Beanery stand at the Ferry Plaza Farmers Market years ago, I scoffed.

Yep, I scoffed. Seriously, I thought, artisan tofu? Is this what the world needs?

I thought this as someone who a) loves tofu and 2) loves artisan things, especially of the food variety.

Yet I couldn’t help that first fleeting curmudgeonly thought: that tofu was tofu. It was a protein-rich flavor carrying vehicle, in no need of “artisan” handling. The whole point of tofu was, if I wasn’t mistaken, to stay out of the way. To let the surrounding vegetables and sauce do the work; to sit there and not draw attention to itself and bring the protein to the party. I was probably also suffering from what I’ve come to identify as “fancy food fatigue.” As a food writer in this great food city sometimes my innate food curiosity wanes and, despite myself, the deep cynic within waxes enough to win the day.

Plus, did I really need to know about yet another product I would crave, that I would know was more delicious, that I would need to pay a premium price for?

Then last fall I was invited to a media tour of the new Hodo Soy Beanery in Oakland. The facility was going to be open to the public for tours and tastings, so they wanted media folks to come and see it. My scoffing continued– internally only, of course–until I saw the steam trays in which Hodo makes the yuba, or tofu “skins.”

Yuba isn’t really so much tofu skin as it is soy milk skin. In a way it is a “pure tofu” since no coagulate is used. Because of its amino acid content and protein-to-fat ratio, soy milk behaves surprisingly like animal milks. When heated and allowed to sit, the protein and fat rise to the surface and form a skin, just like warm milk or hot cocoa. If you lift that skin off the soy milk and let it dry a bit, you have yuba, a slightly chewy and springy beautifully thin sheet of soy akin in texture to the best and most tender freshly made pasta. Yuba can be chopped into noodle like strands, tossed with a dressing, used as a wrap or braised in rolled bunches in a savory sauce.

As I watched the workers gently lift the skins from the top of the steam trays, where the rich soy milk is gently steamed like a slow-going latte, and hang them to dry on racks just above the trays, I asked one of them if the work wasn’t a bit tedious. Just a bit boring? No, he told me, he liked it. He liked paying attention, and carefully watching the trays. It was relaxing, in its way. The way he spoke about tending the yuba trays sounded like me talking about cooking in my kitchen: the thought he put into his work and the attention he paid it. The affection he had for the final product was evidenced in his tender handling of the delicate skins as he lifted them from their baths and hung them on metal bars positioned over the trays so any excess soy milk drips back into the tray and the steamy heat wafting up from the tray lets the yuba dry off slightly without becoming dried out.

I tried a bite and in an instant my sad case of fancy food fatigue was cured. I was reminded that in every case I can think of the small-batch, carefully made, artisan version really is better than the mass-produced one.

The yuba may be the most unique product Hodo Soy Beanery makes, but the soy milk and tofu are equally remarkable, in their more quotidian ways. Hodo sources their organic, non-GMO soybeans from Clay Family Farms, an organic growing co-op in Illinois. Mature and dried soybeans are used to make soy products (fresh soybeans, or edamame, haven’t developed their full protein and fat content), so they are first soaked, then stoneground into a slurry before being cooked and strained to make soy milk. The pulp leftover from this process, or okara, is traditionally used as animal feed and Hodo’s okara goes to feed pigs at Magruder Ranch, some of which end up in the kitchens of Chez Panisse and Café Rouge.

There are many types of soybeans. Beyond soy grown for animal feed, oil and food additives, there are varieties and strains of soy within each group. Hodo sources soybeans with a higher protein and fat content than many soybeans, which results in soy milk that is thicker–with 50% more solids–than most commercial soy milk. The soy milk is as different from the stuff sold in boxes in grocery stores as a tall glass of ice cold Straus dairy milk is from a tin cup of dried milk reconstituted with warm canteen water. Yes, one can recognize that it’s the same product, technically, but the fresh version tastes, quite simply, fresher. Fresh soy milk is nutty and earthy and tastes really really good for you, in a good way like a fresh salad rather than a punitive way like a glass of psyllium husk.

Once that milk is used to make tofu–by adding calcium sulfate as a coagulate, straining it and pressing it–the resulting tofu has a wonderful nutty, clean flavor. While it is perfectly capable of playing the role of proteinrich flavor-carrying vehicle tofu so often gets consigned to, it stands on its own just fine, too.

That fresh flavor and highly perishable product is exactly what Minh Tsai and his cousins had in mind when they started making tofu in their distant cousin’s tofu shop in San Jose.

Minh grew up in Vietnam and started off, in his words, as “a tofu eater, not a tofu maker.” He would go to the tofu shop every morning with his grandfather.

They ate tofu the same day it was made from a local source. “I was disappointed,” Minh said, “at being unable to find fresh tofu here.” He and his cousins started making it for themselves then started selling at the Palo Alto farmers’ market in 2004. They expanded to farmers’ markets throughout the Bay Area, winning plenty of fans along the way. They sold prepared tofu salads, marinated yuba strips and braised tofu along with plain tofu, soy milk and yuba, which made their product more accessible to two groups: people who don’t cook and people who don’t cook tofu. “From the beginning we had a few ready-to-eat items,” said Dean Ku, cofounder and advisor. “We weren’t sure if people knew what to do with tofu, so we wanted items they could just eat and that would show how you can prepare it.”

Along with individual consumers, chefs started taking notice of Hodo, too. An early adopter was Charles Phan; when the Slanted Door started using Hodo tofu, it named the source on the menu just as it did with Niman Ranch beef. Greens restaurant also serves Hodo tofu. But Hodo’s reach extend past Asian and vegetarian spots. Daniel Patterson has been known to feature Hodo products as part of the tasting menu at Coi.

That super-fresh artisan tofu would make inroads in the Bay Area should surprise no one. Along with the Bay Area locavore mandate of fresh, local, organic, sustainable ingredients, we also have the proud history of having the first tofu shop in the United States– Wo Sing & Co., established in 1878 on Dupont Street.

Minh and his cousins don’t run Hodo alone, not anymore. A posse of Bay Area artisan food luminaries–including Sue Conley of Cowgirl Creamery and Anya Fernald of Live Culture–sit on its board and John Scharffenberger of wine and chocolate fame was named CEO earlier this year. “I had a few bites of yuba,” said Scharffenberger, “asked about it, and wanted to be involved. My role was in getting these guys to go beyond just selling at farmers’ markets.”

Not that Hodo has any plans to stop selling at farmers’ markets (quite the contrary, in fact–it just opened at the Davis farmers’ market), but customers pushed for expanded distribution. “People came up to Minh and other people selling at the farmers’ markets and asked to get more of the product in different places,” Scharffenberger explains. “Chefs wanted it, buyers wanted to carry it in their stores. Consumer demand did it.”

While Hodo still sells at farmers’ markets, it now also distributes its soy milk, tofu and tofu products to grocery stores, including Whole Foods, throughout the Bay Area, which means greater access to kickin’ tofu for the rest of us. Hodo’s expansion is necessarily limited by their insistence that their product is a fresh one. The tofu they sell at farmers’ markets has a refrigerator life of five to seven days. They vacuum pack the tofu sold at grocery stores, so it lasts up to two weeks. Like most perishables, however, it is better earlier on. Unscientific home testing reveals that after a few days in the fridge, it is still amazingly creamy and wonderful tofu, but it doesn’t have the same delicate earthy aroma that it does straight out of the gate.

Inspired by the nutty flavor and creamy texture of artisan tofu, I did what any insanely food-centric person would do: I made the quick logical leap that if artisan is good then homemade must surely be better. So I bought some soybeans, put them up to soak overnight on my cool San Francisco kitchen counter, ground them, cooked them, strained them, coagulated the milk, strained that, pressed the curds and expected soy nirvana.
What I had instead was a terrible mess, several hours I’ll never get back and a protein-rich flavor-carrying vehicle as bland and boring as the worst tofu-haters claim it can be. It was in no way creamy. In fact, it was almost anti-creamy in its watery, curdy-ness.
So I will head to the market or, on non-market days, to the store for my tofu. I can’t help but wonder, however, if I could rig enough rods over a large baking dish on my stove to make it worth drying my own yuba.