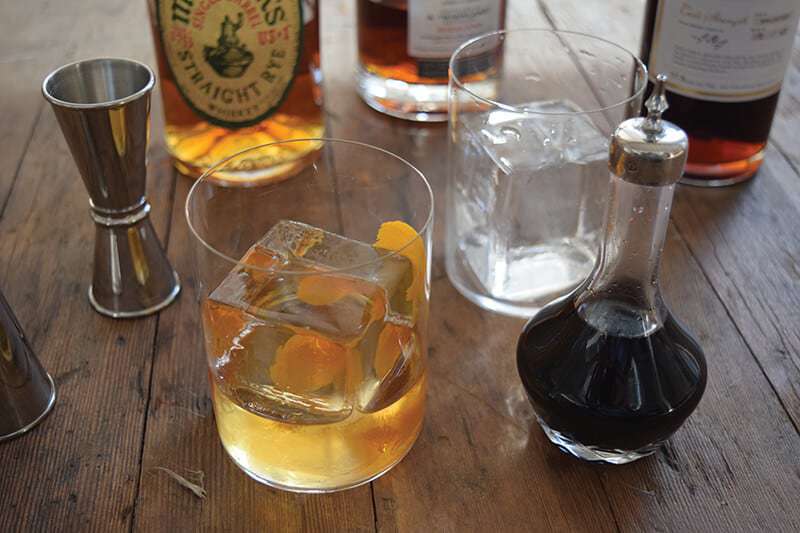 Does the shape of cocktail ice matter? Sidle up to the counter for a discussion with some of San Francisco’s celebrated bar managers and mobile outfits.

I caught up with Ian McCarthy, co-owner and co-bartender of Sharpshooter, a traveling cocktail bar.

Why do some bartenders use large-format or specialty ice, such as spheres and cubes?
The practicality of big ice is that it slows things down in a way that lets you drink more slowly.

That said, it feels like larger format or “premium” cocktail ice hasn’t always had such a prominent place in the bar world. Can you share where it all began?
Cocktail ice begins with what I like to call “cheater ice.” Many of us started out as bartenders with the big high-production ice machines. They spit out a lot of ice. It’s chippy and kind of common. They’re ubiquitous—it’s what’s in your Coke or the water at a casual restaurant. Flat on one side with curvature on the other. The curved side maximizes displacement to amplify the effect of a filled glass. It’s not bad in and of itself. It has a lot of good practical applications. There’s not one tool for all the jobs—that’s where different sizes and shapes come in, depending on the application.

What’s the deal with dilution?
Ice that has a greater mass-to-surface-area ratio is going to chill and dilute more slowly. Many people have the assumption that big ice doesn’t dilute the drink. It still dilutes the drink but will do it more slowly, and in a more controlled manner. It may not get as cold as smaller-format ice. For example, in tiki drinks, finely shaved and pebbled ice will allow for the most chilling effect. Its best application is in sweeter, fruitier drinks with high proof. In contrast, you’d want a big cube of ice on an Old Fashioned since you want that drink to stay spirit forward. Think of the window for a drink to best open up—it’s that temporal window of deliciousness you’re after.

Does it feel like there are too many options with all the different types of ice these days?
The more tools a bar person has to create a drink, the better. It’s like having more darts to throw at the board. Choice isn’t always a good thing but if you need more options, ice presents that in a nice way. It provides another variable that can get you to your ideal vision for a drink. For us, the more tools in our toolbox we can use, the better the guest experience. Ice is often the most visual cue that a patron may be in for a less ordinary cocktail experience. I work with ice for a wow factor, often placing a large 25-pound cube in punchbowls. It primes you for an experience.

Wanting to chip away more at the topic, I spoke with Casandra Salazar, bar manager at Leo’s Oyster Bar.

Let’s start with crushed ice. The Palm Beach comes with crushed ice—can you share why you paired this ice with this drink?
You always want your cocktail at a certain concentration. When something’s more viscous, you want a bit more dilution, so it’s not too heavy on the palate. Sometimes I get questions like, “Why do I have to have it this way, and not up?” A highly concentrated drink—like those with high-proof rum—are really hot on the palate and it’s hard to drink something so strong. On the opposite end of the spectrum, if someone’s drinking a nice Scotch, it’s typically served with the King’s Cube, or a large square of ice. It adds a little chill while melting slower than other forms of ice. It’s slower to melt because it’s more dense.

Do bartenders ever invent new types of cocktail ice?
I’m actually developing a flavored ice pop paired specifically with a drink, so it can evolve as the ice melts. It’s nice to have the option of something that changes with each sip so you can have a new experience every time you return to the glass.

Whatever your tonic, the next time you’re savoring a cocktail, we hope you have a newfound appreciation for the various forms of ice employed. The drink itself is just the tip of the iceberg!