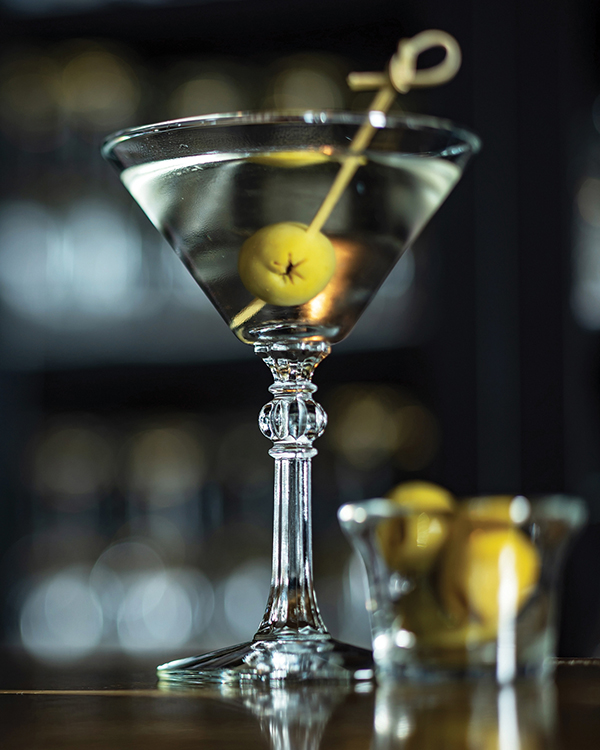 You’ve had one a thousand times (OK, maybe 100). You think you know the Martini cocktail. But, do you?

I, for one, have often struggled with knowing how to get it just right, both to excite my palate and to place my order with confidence.

The history of the Martini is as complex as the drink is quaffable.

“This cocktail is one of the most vague in its interpretations, most misunderstood and least cohesive as far as the ordering process and structure,” says J.P. Smith, bar manager for Mourad, in SoMa.

To roll back the curtain, I spoke with Michael Kudra, principal bartender at Quince (Jackson Square). “The Martini has a crazy history. Of the three folklores of how it was invented, my favorite is the story of the Occidental Hotel. During the Gold Rush, a miner from Sierra Nevada struck it rich. At the time, he was accustomed to drinking the “Martinez,” a drink of Old Tom gin, sweet vermouth, Luxardo maraschino liqueur and bitters that [is believed to have] originated in Martinez, California. This miner headed to San Francisco, straight to the Occidental Hotel in search of a libation. To make the drink more to his taste, he asked the bartender to cut the Luxardo and switch from Angostura to orange bitters. Jerry Thomas’ The Bar-Tender’s Guide (1862) was one of the first publications of that story,” says Kudra.

The term “Martini” preceded the term “cocktail.” According to Kudra, “It began as a beverage you’d order at a hotel, then died out with Prohibition, which is when cocktails were invented. During Prohibition, people started adding ingredients that weren’t typically mixed with spirits, such as sugar, to drinks.” Essentially, liquor needed to be diluted such that if a bust were eminent, speakeasy-goers could sling their drink and duck out. “Using fresh citrus juice and sugar, you have less booze on your breath than when you’re drinking a straight spirit,” explains Kudra.

Tracing the evolution of the Martini since the 19th century with Kudra and Smith, I began to see the cultural and social influences of each era. “The ‘dry’ in ‘dry Martini’ comes from dry vermouth. The drink must be made with dry vermouth,” says Smith. “Frank Newman elaborated on this in his novel American Bar (1904). At the time, it was made with gin and Martini & Rossi dry vermouth. Dolin vermouth was available, and Carpano Antica was around prior, but Rossi had the money and marketing—that’s why the brand took off.”

Fast forward to the 1960s, it becomes the Bond era. “People ordered Smirnoff [vodka] with a twist. The drink began trending because everyone could see James Bond drinking it and they wanted to experience it. ‘Oh, he drinks Martinis—that’s masculine.’ It’s incredible how important spirits are to the forming of America,” adds Kudra.

If the Martini in its earlier form was intended to open up your palate—“light, not too strong, refreshing,” according to Kudra—then the 1980s was “the self-destruction of the cocktail scene.”

“People were calling all cocktails ‘Martinis’: ‘I’ll have a passionfruit Martini.’ It gets me lightly irritated. It was an era of the ‘cutting off of cocktails,’ where you’d see people having fake lime juices, sugar, vodka and fruit in their drinks—it was all about the glassware, and not referring to the drink itself,” continues Kudra. “None of it fell into the category of a Martini except the shape of the glass it was served in,” elaborates Smith.

“A standard Martini is equal parts dry vermouth and gin. Everything else should have a different name. Add a dash of Angostura bitters and it becomes a Blenton, for example. The Gibson is the rendition made with pearl onions,” says Smith.

“Today, as far as classic cocktails, when a guest says they want an old fashioned, the only thing I need to ask is: Do they want it made with rye or bourbon? With the Martini, that’s not the case. With each guest, we must read them—the level of vermouth they’d like, whether they’re simply looking for vodka shaken or stirred; whether they like it wet, dry or extra dry. One misconception is that the Martini is simply straight booze, whether stirred or shaken, and served up,” Smith says. “There comes a time and place to educate your guest, which is never on the spot. When someone tries to order something that’s not a Martini, such as a vodkatini, but calls it a Martini, I want to say: ‘Well, that’s not a Martini. If you just want Grey Goose served up, order it up.’ A Martini must have the presence of vermouth. As professionals, we’d love to see patrons understand that a Martini is made with gin. We’d love for them to be just as in-tune when ordering a Martini as an old fashioned; to know what it is they want and how to order it.”

In slight contrast, Kudra feels it’s more of a conversation with a guest, and figuring out their palate. “There should be no ego in anything a guest requests. Alcohol is attached to the human condition. It’s that first sip after a hard day. A guest takes that first sip and you hear that ‘ahhh… ’ and everything is OK,” he says. “Alcohol cleanses your brain such that you’re not thinking of all the stressful parts of what being a human is. To that point, I love dropping a cocktail with history and a story, such as the producers who make the spirit.”

One thing from both Smith and Kudra is clear: The Martini needs to be made with very cold gin. “Vermouth should also be labeled and dated in the fridge at all times. People often have a bad perception of vermouth because they’ve been served Martinis made with vermouth that has been left out of the fridge, which alters how it behaves when mixed with cold gin. Everything [all of your ingredients] has to be absolutely perfect. Olives should be fresh. One of my biggest pet peeves is when [bartenders] keep them out of the fridge. If left out all day, the olives dissipate their oils into the drink. They’re going to hit the gin completely differently and have a sour note if landing at a warmer temperature,” says Kudra.

“It’s the little things that make a drink. For example, a lemon twist will bring out the lemon in the gin. I use scientific aspects and cooking behind my bar. I look at how ice melts at different dilutions, temps, etc. I put gin in first, then tonic at a 45° angle. Pouring tonic water over gin waters it down, and nearly all of the carbonation is removed if you pour room-temperature tonic from above.”

“Great vermouth and gin don’t need a garnish,” says Smith. Adding a garnish, however, is a way to make the cocktail more palatable for customers, to harness the power you can feel when you hold a drink like that.”

“I like to have salinity for balance in all of my cocktails—olives, caper berries. I put salt in 60° of my drinks in some form,” says Smith. ”I have a drink on our menu—The Eye of the Whale—that’s in the Martini realm, but a far departure from a true Martini because of the quantity of ingredients, but it has the base qualities. Everything in the drink screams ‘ocean.’ I do a 4:1 ratio of Beluga vodka to Clear Creek’s Rainier cherry eau de vie (an age-less, spirit-forward, dry cherry distillate). Drawing upon aromas found near the coast, I steep aromatics like pink peppercorn, juniper berry, green cardamom, African long pepper, eucalyptus and orange peel with Everclear. I then create a bay laurel tincture and a kombu (dried kelp) botanical solution for a more vegetal component. I combine these various elements. Lastly, I caramelize a Luxardo cherry until it solidifies in the base of an oyster shell, and torch it to create a burnt shine. In its finished state it looks like an eyeball, which is awesome.”

“I have a Martini on the menu at Quince right now that’s based on the Occidental Martini. I’ve fallen in love with the Dolin dry and Dolin blanc as a 50/50 ratio and Plymouth gin that I infuse with chamomile flowers from our farm, Fresh Run Farm, in Bolinas. It’s ¾ ounce each dry and blanc vermouth to 1½ ounces Plymouth. I’m currently using a winter citrus bitters, which includes Buddha’s hand, Meyer lemon, blood orange, lime, bergamot and Bearss lime. I also make what I call the ‘Japanese Hard Shake.’ It’s focused on the dilution of ice with a house-made yuzu tincture, Dolin dry vermouth and Japanese KI NO BI Kyoto dry gin, which is very clean, almost odorless,” says Kudra. “To make the yuzu tincture, I create a ‘yuzu bath spa’ which incorporates the seeds and peels of the yuzu fruit, and add Bearss lime peels to remove the bitterness.”

I can attest that this Japanese Hard Shake is as elegant as it is unique. It doesn’t leave me fretting over whether I ordered my Martini the way I actually wanted to enjoy it, because I am enjoying it.