Bayonne Ham For The Holidays 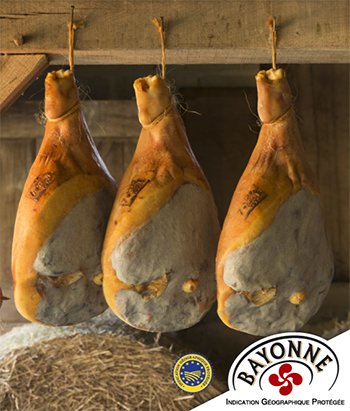 We’ve been busy planning special family meals with the holidays fast approaching. Traditionally, we celebrate every Christmas Eve with a raclette dinner. This year’s dinner will be all the more celebratory since our family from Switzerland is visiting for the first time in years. Raclette, the French word that means “to scrape,” refers to both the type of cheese and the traditional way it is served. If you’re visiting a restaurant in France or Switzerland during the winter, look for one that has a fireplace in the dining room, they’ll most likely have a wheel of raclette cheese next to the fire. As the cheese melts, it’s scraped onto a plate, topping boiled potatoes, cornichons, and savory slices of Bayonne Ham. 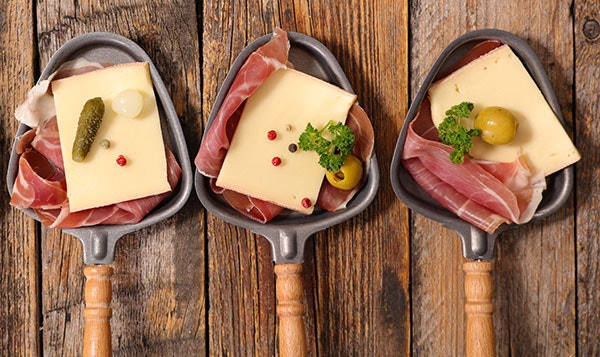 While we always include the French and Swiss versions of raclette cheese (to see who can guess which is which) in our dinner, we look to France for the ham accompaniment and the choice is always Bayonne. You can find Bayonne ham in the Bay Area at Fabrique Délices, an artisan producer of the finest charcuteries in the country, including all-natural pâtés, mousses, duck confit, duck Rillettes, boudins, sausages, and much more. Fabrique Délices products are available online, at retail locations and farmers markets in the Bay Area.

While we consider ourselves Bayonne aficionados, we’re not experts and are always looking to learn more about French culinary traditions. Sébastien Espinasse, president of Fabrique Délices, generously answered some of our queries about Bayonne Ham. 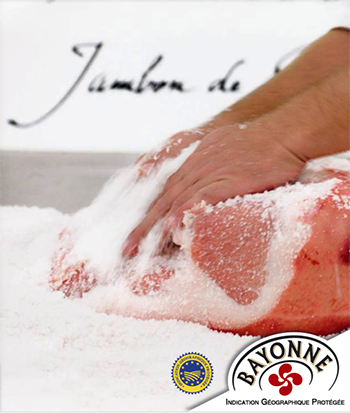 Edible SF: What’s unique about Bayonne Ham? How would you describe the differences between Bayonne and, say, Jamon Iberico or prosciutto?

Sébastien Espinasse: Bayonne ham isn’t just a great cured ham; it carries much history and culture and is a regional staple in the Gascony region, southwest France. It is an ingredient that you will find in every style of cuisine, from grandma’s Axoa (Lamb stew with Bayonne Ham and sweet peppers) to a charcuterie board to enjoy in a local Ostatua (Community centered bar/restaurant).

The last ingredient, but one of the most important, is time. During a 12 months aging process, each ham is finally labeled a PGI Bayonne Ham; the meat will mature, dry, and develop its fruity, nutty aroma and supple, melt-in-the-mouth texture.
Each great ham, or generally speaking food product, resembles the terroir it comes from and the people who make it. Bayonne ham is indulgent and delicate. It might look rough on the inside but has a generous heart, exactly like the people from Gascony.

ESF: What cheeses pair best with Bayonne?
S.E.: Bayonne has a delicate balance between saltiness and fruitiness. You need to keep a certain balance throughout the board to keep enjoying this balance. As with wine, food from the same region will pair well with it. The sweetness of a hard paste sheep milk cheese is a great counterbalance to the ham’s sweetness; choose an Ossau Iraty, and the two regional staples will be reunited.

ESF: What is your favorite presentation of Bayonne Ham?
S.E.: Traditionally, Bayonne ham was knife sliced into thick slices, mostly because people cook with it. I like to enjoy it very thinly sliced so that it melts in your mouth, literally. It is a versatile product that makes the best sandwiches or is an excellent addition to a raclette. I have even grilled it once to add it to a burger instead of bacon; thinking about it, I need to do this again soon.

ESF: What would a charcuterie board look like if you built it around Bayonne in particular?
S.E.: Not overly complicated but generous and straightforward. There is no overthinking with this type of food, but there needs to be enough for everyone because people will come back for more! I would pair it with Sheep Milk Tome from the Basque Region like Agour Ossau Iraty.

ESF: Do you serve Bayonne during the holidays? If so, how?
S.E.: Nature does things very well: There are four seasons and four legs to a pig… one leg per season, that is. For the holiday, to offer something special to guests and family, people go for longer aged hams, up to over 20 months. A thin sliced of such a mature ham truly gives the feeling of a special moment. 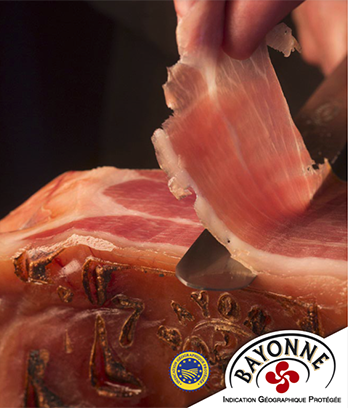 ESF: Do you think Bayonne should be served solely with French cheese, or would you mix it up geographically?
S.E.: Absolutely not, I believe that the search for excellent food pairing is always on, and some of the best ones are sometimes the least expected. American cheese, for one, has gone so far in the last few years that there still are great combinations to be found. The possibilities are endless, and I think people should never stop exploring.

ESF: Obviously, Bayonne carries quite a history. What, if anything, do you wish people knew about Bayonne before enjoying it?
S.E.: Because of some industrial producers, charcuterie has been criticized. More than its history or the intricacies of its production process, I think the most important thing to know is that Bayonne ham is a name that people can trust. It is natural, has no additives other than spring salt. It is produced by people who are moved by passion and have the highest work ethic. It is a product people can buy with their eyes closed, nothing is hidden, and in today’s climate, this trust is priceless.